Progress is slow, but broadband is reaching some of the country’s most remote locations. 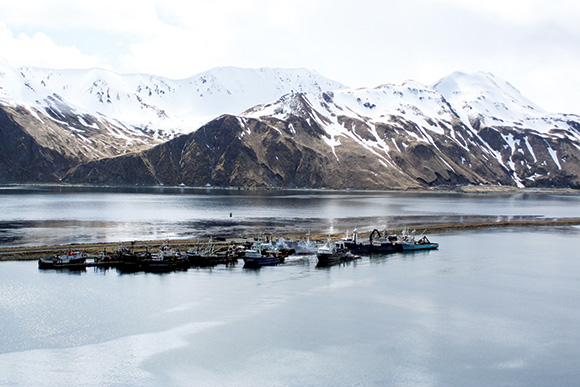 Alaska’s GCI is to deliver fiber service to the Aleutian Islands in 2020.
Photo: Getty Images
by GARY DAUGHTERS

From telemedicine to remote work to distance learning, the COVID-19 pandemic has shone a spotlight on the critical role high-speed internet plays in modern life through its delivery of services that once were available only in person. Reliance on broadband has spiked since the pandemic’s onset, with home broadband traffic having increased by up to 40%, according to the Information Technology and Innovation Foundation.

At the same time, the unprecedented demand for broadband has brought into starker relief the perennial problem of the “digital divide.” Released in April, the Federal Communications Commission’s (FCC) 2020 Broadband Development Report identified approximately 18 million Americans — principally in remote, rural areas — without access to any broadband network.

Unaluska, Alaska, is about as far off the beaten track as an American town can get. A dot on the chain of Aleutian Islands that extends into the Bering Sea, Unaluska, a port city of 4,500 people, sits some 4,300 miles southwest of Anchorage. In mid-October, Alaska’s largest telecom company, GCI, was awarded a $25 million grant from the U.S. Department of Agriculture to help deliver terrestrial broadband service for the first time to Unaluska and five other Aleutian communities — King Cove, Sand Point, Akutan, Chignik Bay and Larsen Bay — as early as 2022.

“Fiber service, the gold standard of broadband connectivity, will enable Unaluska and the other project communities to realize their full economic potential while advancing the security interests of the United States.”

The Aleutians project offers an extreme glimpse into the challenge of extending high-speed cable lines to remote locations. It will require GCI to lay 800 miles of undersea fiber, running from Kodiak along the south side of the Alaska Peninsula to the Aleutians. The total cost is estimated at approximately $58 million. GCI is to invest $33 million to pay expenses not covered by the USDA grant.

The project, says Alaska’s U.S. Senator Dan Sullivan, shows that “we are making strides in breaking down the digital divide and serving Alaskans who, for too long, have been without a utility that so many of us take for granted, one that has shown itself to be absolutely indispensable in the age of COVID-19.”

The federal grant facilitating GCI’s Aleutian Islands project is part of the second round of awards under USDA’s ReConnect rural broadband grants and loans, initially funded by Congress in March 2018. During the first round, the Department invested $744 million in broadband projects in 34 states, with Oklahoma, Missouri, Virginia, Alabama and Tennessee being the top recipients.

Round Two, which authorized $550 million in December 2019, received an additional $100 million in funding through the CARES Act. In the run-up to the election, USDA released a flurry of ReConnect grants and loans, totaling some $516 million in September and October. As another of dozens of examples, Pine Belt Telephone Company in Alabama is to use a $6.5 million ReConnect grant and a $6.5 million ReConnect loan to connect 5,799 people, 143 farms, 83 business, five fire stations, five schools and four post offices to high-speed broadband internet in Perry, Hale and Marengo Counties.

As the mounting federal subsidies suggest, the challenge of delivering rural broadband is a matter of money. It simply costs more to wire remote locations for broadband than providers can earn back. A 2017 report by the FCC estimated the cost for a one-time fix to deliver broadband to everyone at some $80 billion.

Launched in January 2020, the FCC’s Rural Digital Opportunity Fund (RDOF) represents the government’s biggest single investment to date toward closing the digital divide. Through a two-phase reverse auction mechanism, the FCC is to provide internet companies with $20.4 billion in subsidies over 10 years to finance broadband networks in unserved and underserved rural areas. The funding will connect roughly 10 million Americans who don’t have any internet access or are on slow speeds, according to FCC Chairman Ajit Pai. 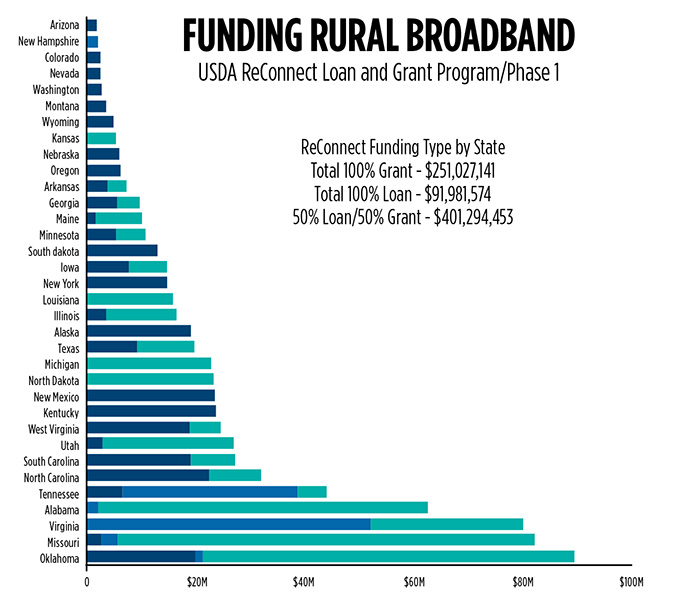 “The current pandemic has highlighted the importance of bringing broadband access to all Americans, and the Rural Digital Opportunity Fund is our boldest step yet to bridge the digital divide,” said Pai. RDOF’s benefits, he said, “will be felt from the Pacific Coast to the Great Plains and from Appalachia to the Gulf Coast.”

Three weeks prior to the October 29 Phase I auction for up to $16 billion in subsidies, the FCC released its list of eligible census blocks — those with no terrestrial providers that offer internet access with download speeds of at least 25 megabits per second (Mbps) and upload speeds of at least 3 Mbps. Within those blocks, California has the most eligible “locations,” or homes and businesses, with 370,986. Texas and Michigan follow with 311,108 and 251,083. North Dakota has the fewest with 2,780.

The 386 applicants for subsidies to expand rural broadband service include some of the country’s largest phone and cable companies, including Verizon, US Celluar, CenturyLink and Cox. Close to 200 rural electric co-operatives are among the applicants, as well. Under the reverse auction, awards are to be extended to providers that take the least amount of money to provide the highest speeds. The Phase II auction, bids for which will be accepted at a date yet announced, is to award about $4 billion to areas that are underserved as opposed to fully unserved.