Energy Industry Gets Surge of Talent 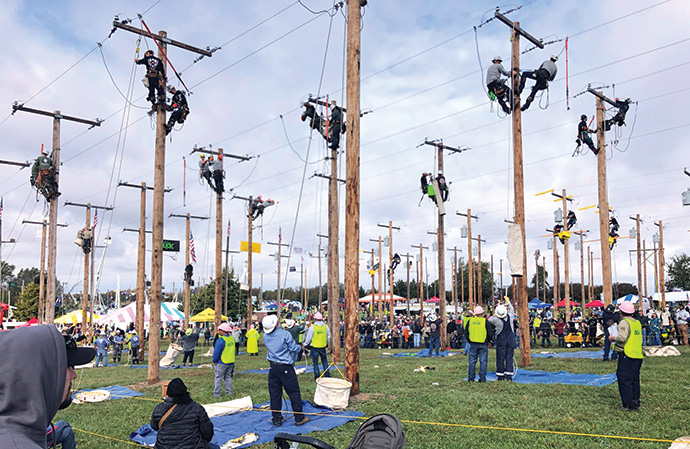 Utility companies will need to fill 29,000 lineworker positions by 2023, according to industry projections.
Photo of the 2019 International Lineman’s Rodeo courtesy of ComEd
by ADAM BRUNS

Even with a lull in oil and gas activity, there is no shortage of concern about workforce shortages across a spectrum of energy fields.

Formed in March 2006, the Center for Energy Workforce Development (CEWD) is a non-profit consortium of electric, natural gas and nuclear utilities and their associations — the American Gas Association, American Public Power Association, Distribution Contractors Association, Edison Electric Institute, National Rural Electric Cooperative Association, and Nuclear Energy Institute. CEWD was formed expressly to enable utilities to work together developing solutions to the coming workforce shortage in the utility industry. What kind of shortages are we talking about? Here are the projected worker replacement needs by 2023:

CEWD conducted its sixth Gaps in the Energy Workforce Survey in 2019. Sixty-two companies participated in the 2019 data collection, representing about 67% of the electric and natural gas industry, including all companies that own and operate nuclear generation facilities.

“The results of the survey indicate that the age of the workforce is starting to flatten, showcasing that more younger people are being hired and that retirements are reaching levels from the pre-2008 recession,” the organization reported. “With a focus on the creation of energy education pathways in high schools, community colleges, and universities, companies have seen an increase in the talent pool for recruiting and hiring into high-skill positions.”

Responding companies forecast hiring for 2019 through 2023 between 6% and 7%, which is greater than attrition forecasts.

In March 2020, the CEWD responded to the release of the 2020 U.S. Energy and Emplyment Report, jointly prepared by the Energy Futures Initiative and Energy+Environmental Economics. Across all sectors in 2019, the report found 84% of energy employers reported difficulty hiring qualified workers, an increase of seven percentage points from the year prior and 14 percentage points since 2017.

Across sectors, employers listed a lack of experience, training, or technical skills as the top reasons it was difficult to hire needed workers. The need for technical training and certifications were also cited, “implying the need for expanded investments in workforce training and closer coordination between employers and the workforce training system,” according to the report, which among other experts quoted CEWD Executive Director Missy Henriksen:

“When CEWD was first started, 50% of the utility workforce was eligible to retire in the next five years,” she said. “We had no steady stream of talent for specific skillsets. Our goal was to identify critical jobs, determine the best way to recruit and train, and then develop pipelines.”

Still On the Line

Lineworkers, technicians, plant/field operators and engineers make up 45% of the total utility workforce of 603,000, and are considered mission-critical for the generation, transmission and distribution of electricity and natural gas across the country. Engineers and lineworkers continue to skew younger (average age of 30-32), while plant operators and skilled technicians in both electric and gas transmission and distribution and generation remain the oldest population in the key jobs “and will continue to need focus from a talent pipeline perspective,” CEWD reported, “with non-nuclear generation technicians having 36% over the age of 53.”

Among the accomplishments outlined in the CEWD’s annual report for 2019, the organization registered 2,000 military veterans on its Troops to Energy Jobs site; saw 3,000 students earn the Energy Industry Fundamentals Certificate; and partnered with 240 education institutions through the National Energy Education Network, representing 400 energy programs.

One example CEWD touted in 2020 from its Troops to Energy program was Victoria Ollo, 26, who graduated from West Point with a nuclear engineering degree in 2015 and wanted to work for Southern Company at its new nuclear plant coming online soon at Plant Vogtle in Waynesboro, Georgia.

Through the Troops to Energy website and database, she made direct contact with Southern Company’s military recruiter, and got a call the very next day. Although there was overlap between the end of Ollo’s military service and the start of systems operator training, she was able to use the SkillBridge program, which paid for her to train for those six months. Operated by the Department of Defense, SkillBridge allows service members to gain valuable civilian work experience through specific industry training, apprenticeships, or internships during the last 180 days of service.

The fact that Ollo is a female on the road to being a nuclear systems operator is noteworthy, but may become less so as utilities and energy companies make inroads in workforce diversity. That applies in the lineworker field too. Early in 2020, for instance, Savoya Taylor became the first woman overhead electrician specialist (OES) to work for Chicago-based ComEd. A type of lineworker, an OES is a troubleshooter first responder who works on the transmission and distribution system alone. A ComEd newsletter relates that her 18-year-old daughter is now in lineworker training too.

Utilities like ComEd continue to back STEM education programs to fill all job pipelines. In December, the utility announced its second annual round of northern Illinois students who would receive scholarships to pursue engineering degrees at the Illinois Institute of Technology (Illinois Tech) and the University of Illinois Chicago (UIC). ComEd Scholars (eight this year, after four the inaugural year) are guaranteed an opportunity to interview for internships at ComEd and its parent company, Exelon, and are invited to participate in a mentorship program with ComEd engineers.

Forward-thinking utilities are also diversifying and strengthening their ranks even as they diversify their energy mix, thanks in part to training funded by the Future Energy Jobs Act (FEJA) of 2016.

ComEd’s 2019 annual report submitted to the Illinois Commerce Commission reviewed progress of the Craft Apprenticeship Program led by the Illinois International Brotherhood of Electrical Workers Renewable Energy Fund (IBEW REF), as well as the Solar Pipeline and Multi-cultural Job Training programs. In 2019, the three initiatives had a combined enrollment of 614 trainees. Ninety-four percent completed the program and 443 secured employment — up from 285 in 2018. Participants accepted a broad range of positions, including solar panel installers and technicians, energy brokers, site surveyors and training instructors. Sixty-three percent, or 384 participants, were people of color and 92 were female.

“Our commitment to powering Illinois communities goes beyond providing clean, safe, reliable and affordable energy to our customers,” said ComEd CEO Joe Dominguez. “We are honored to partner on these programs with Illinois IBEW REF, numerous businesses and leading non-profit organizations to open the door for those who are ready to seize opportunities in the new energy economy in Illinois.”

The FEJA training programs are scheduled to run through 2029 and are supported through three successive $10 million funding periods. The first installment was made in 2017, and future payments will be made in 2021 and 2025. FEJA strengthens the state’s Renewable Portfolio Standard through funding of $180 million per year and growing to $220 million per year for wind power, large-scale solar, and rooftop and community solar.