Programs that Work for People Who Work

A peek into the latest data shows where certified logistics skills are most plentiful. 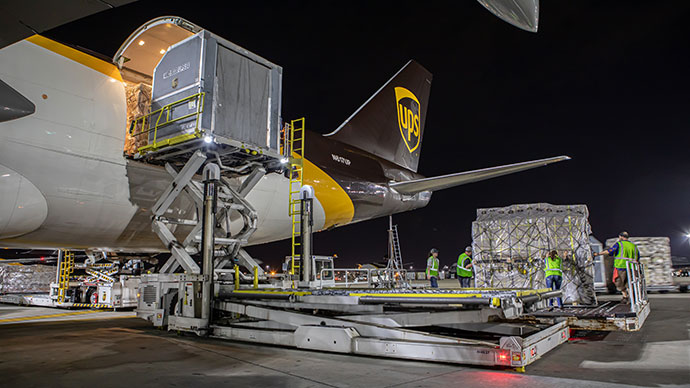 The Metropolitan College partnership among UPS, the University of Louisville and Jefferson Community and Technical College, which debuted in 1998, has seen more than 20,000 students participate while also working at UPS Worldport.
Photo courtesy of UPS
by ADAM BRUNS

My education source? Executives at AllianceTexas, the 18,000-acre mega-development launched 30 years ago in Fort Worth by developer Hillwood. It seemed prospects wanted quantified data on worker certifications, performance and qualifications. So the Hillwood team worked with MSSC to create the logistics certifications. It had a big impact, helping turnover of new workers go from between 40% and 50% to the 5% range.

Fast forward to 2020, and you can say that, even in the midst of vast unemployment, the need for qualified and certified logistics workers may be stronger than ever, as e-commerce surges to fill the socially distanced gaps between us and the goods we need and covet.

A longtime partner to several federal agencies, MSSC’s vision is to assess 20% of the nation’s front-line manufacturing production and material handling workers in 20 years — 3 million workers by 2030. As of the latest M&L Index, a scorecard issued by MSSC in 2020, here are the top states for its Certified Logistics Technician credential: 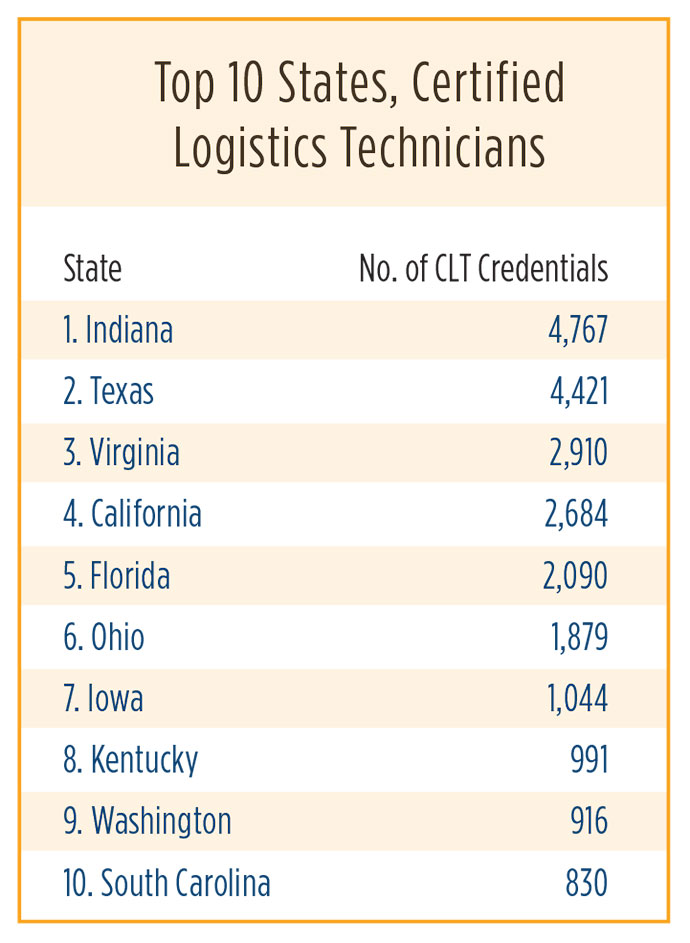 It’s not surprising to see so many states with strong port activities topping the list, focused as they are on high volumes of goods going to and from those ports every day. But Indiana? The state’s CLT total has exploded from a mere 899 certificates in 2014. California’s total has more than doubled from 1,776 in 2014.

The Hoosier State does have a robust set of ports all its own via its unique Ports of Indiana system. Of the 3,370 logistics facility investments tracked by Site Selection magazine’s Conway Data Analytics database since January 2018, Indiana accounts for nearly 100. Its logistics services infrastructure also serves the strong logistics footprint of neighbors in Illinois (566 projects, No. 1 in the country) Ohio (262) Kentucky (85) and Michigan (51), with all five states together representing nearly one-third of all projects in the country.

So it’s no wonder the CLT credential programs are busy at Indiana higher education institutions Oakland City University (two campuses and 1,348 CLTs) and Ivy Tech, where 17 of its 20 campuses have produced 1,864 CLTs, led by Indianapolis

with 628. The state even boasts a strong CLT cohort of 172 out of North Side High School in Fort Wayne.

Back at AllianceTexas, Mike Berry, Hillwood president, spoke to me last summer as the pandemic impact was striking, simultaneously gutting employment in most sectors and driving expansion in logistics and e-commerce.

“The Alliance platform is largely built on logistics, e-commerce and supply chain, so we have a huge responsibility to keep everything working on that front,” he told me. “All of those businesses we’re in fall under the definition of critical and essential.”

Stocking those companies’ workforces was therefore paramount too, as several quickly ramped up hiring as the health crisis spread. Hillwood already pioneered workforce certification and training programs years ago for its tenants, and recently hosted the opening of the Tarrant County College Center of Excellence in Aviation, Transportation and Logistics. AllianceTexas also was using a platform called ShiftSmart to allow employers to shit and match available labor with hourly jobs in busy fulfillment and logistics centers across the development.

Working by Degrees: Win-Win Programs in Louisville and Omaha

More than 20 years ago, the innovative Metropolitan College was launched in Louisville, Kentucky. Now it’s getting a relaunch.

A partnership among UPS, The University of Louisville and Jefferson Community and Technical College, the program allows participating students to get their full-time undergraduate tuition paid to either institution, as well as book reimbursement money, bonuses and other benefits. In turn, the student works third shift as a part-time package handler at the giant UPS Worldport complex, with classes specially scheduled to accommodate that overnight shift’s demands.

In January 2020, Louisville Mayor Greg Fischer joined officials from the three partners to extend the program to April 2027, with Metro College evolving to be more intentional in encouraging students to consider careers in high-demand fields and improving career pipeline opportunities, including computer science and engineering, computer information systems, finance, accounting, and other degrees and certificates. Among other opportunities in the region, UPS itself has thousands of jobs outside Worldport, including a large IT operation.

Over in Omaha, a similar approach to widening career horizons for goods movement professionals involves Union Pacific and the University of Nebraska at Omaha (UNO). An innovative corporate partnership allows Union Pacific employees to register for fall courses without out-of-pocket tuition costs, differing from traditional employer reimbursement programs requiring students to pay for classes up-front. More than 150 Union Pacific employees applied to become a student and 40 were enrolled for the fall semester with another 60 admitted and ready to enroll.

“UNO is helping us empower employees by removing financial and scheduling barriers that can discourage people from pursuing higher education,” said Beth Whited, Union Pacific executive vice president and chief human resource officer. “We are proud to support our employees’ professional growth through UNO’s nationally-recognized education programs, which will lead to exciting career advancement opportunities in the future.”