Higher education meets the talent needs of the media and entertainment industry. 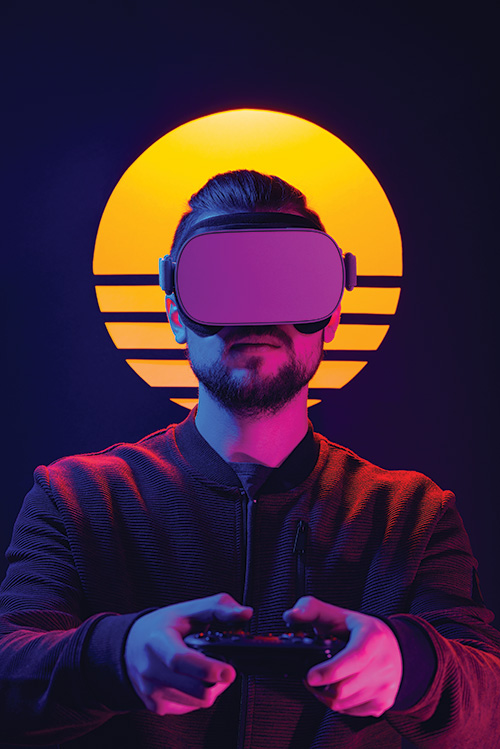 Blending the worlds of technology and artistry, the U.S. media and entertainment industry is continuing to grow at an explosive rate.

According to the Deloitte Digital Media Trends Survey in 2020, everything from streaming services to video games has grown significantly, reaching more households and creating new opportunities. The report is unique because it was started in late 2019 and reissued following stay-at-home-orders in the first few months of the COVID-19 pandemic, providing an intriguing “before and after” look at the industry. The report indicated that each U.S. household has an average of seven digital screen devices — smartphones, tablets, laptops and smart TVs. Four-fifths of U.S. consumers have a streaming video subscription. Additionally, more people are spending time playing video games. Pre-COVID, 29% of consumers reported binge-gaming (averaging 3.3 hours of play per session) each week, while that number jumped to 48% since the crisis began.

As the demand for these products continues to expand and evolve, the need for talent is all the more significant. Fortunately, higher education institutions across the country have created robust training programs to fill the workforce pipeline for the growing industry.

Before the global COVID-19 pandemic, Georgia’s film industry set a record. In 2019, the 391 film and television productions filmed in Georgia spent $2.9 billion in the state, supported 3,040 motion picture and television industry businesses, and delivered $9.2 billion in total wages.

No other film production center has seen more growth in film and television infrastructure over the past decade than Georgia. Direct spending alone by the film industry grew by 4,000% from 2007 through 2018. In fiscal year 2019, just under 400 productions were filmed in Georgia, including 26 feature films, 31 independent films, 214 television series, 91 commercials and 29 music videos.

One of the industry’s strongest workforce pipelines is the Georgia Film Academy, a collaborative effort of the University System of Georgia and Technical College System of Georgia. Georgia Film Academy classes are offered for college credit at more than 20 institutions across the state. The program provides higher education programs; certifications place students into craft internships leading to apprenticeships and jobs.

“From Savannah to Dalton to Athens, from Gainesville to Griffin to Gwinnett County, we are proud to build a business that belongs to all of Georgia,” said Stepakoff. “Never in the history of filmed entertainment has there been a story like Georgia’s. What has happened here, and the pace at which has happened, is unprecedented.”

According to Select USA, the $717 billion U.S. media and entertainment industry represents one-third of the global industry. Comprising film and television, streaming content, music, radio, video games, and ancillary services, the U.S. industry is expected to reach more than $825 billion by 2023, according to the 2018-2023 Entertainment & Media Outlook by PriceWaterhouseCoopers (PwC).

New York is a hub for the digital gaming industry. Home to globally recognized companies like Vicarious Visions, Take Two Interactive and Playdots, Inc., New York is the birthplace for some of the most iconic games in the industry, including Guitar Hero and the Grand Theft Auto franchise. The state’s more than $930 million digital game development industry continues to grow by leaps and bounds.

Three state universities have developed Digital Gaming Hubs with the support of state funding to grow the sector and create new, innovative applications for gaming technologies. The hubs at New York University (NYU), Rensselaer Polytechnic Institute (RPI) and Rochester Institute of Technology (RIT) work to build a network that attracts talent to the state while keeping promising game development students in New York after they graduate. The hub facilitates communication and collaboration among academic researchers, industry leaders, business incubators and community partners.

Created in 2016, the state has invested $16+ million in its Digital Game Development hubs. These centers have created more than 120 jobs and led to the development of 110+ games.