EDUCATION LEVEL IS ONLY ONE PART OF THE LIFETIME EARNINGS PICTURE

Workers with higher levels of education tend to earn more than those with less education, but that is not always the case.

“More education doesn’t always get you more money,” said Georgetown University Center on Education and the Workforce (CEW) Director Anthony P. Carnevale upon the October 2021 release of the CEW report “The College Payoff: More Education Doesn’t Always Mean More Earnings.” Other factors influencing lifetime earnings include age, field of study, occupation, gender, race and ethnicity, and location, according to the report, which was based on 10 years of working-age earnings data through 2019 from the U.S. Census Bureau’s American Community Survey. Among other findings, the report determined that 16% of high school graduates, 23% of workers with some college education, and 28% of associate’s degree holders earn more than half of workers with a bachelor’s degree.

To be sure, having more education typically pays off, says the report (see graph), with an associate’s degree typically conferring a 25% boost and a bachelor’s degree a 75% boost in lifetime earnings over a high school diploma. A bachelor’s degree holder earns, at the median, $2.8 million over a lifetime, which translates into average annual earnings of about $70,000.

However, a typically high-earning undergraduate major does not guarantee high earnings for everyone with that major, so students with majors that typically lead to lower earnings can still earn more than workers with other majors. For example, bachelor’s degree holders who study communications and journalism earn $4.1 million at the 75th percentile, more than the median for bachelor’s degree holders in the highest-earning field, architecture and engineering. In other words, at least a quarter of workers who majored in communications and journalism out-earn half the workers who majored in architecture and engineering. Similarly, earnings data from sales occupations illustrate that at the 75th percentile, sales workers with bachelor’s degrees can earn $4.8 million over their lifetime — more than the median for sales workers with master’s degrees, which is $3.7 million.

Lifetime earnings (adjusted for the cost of living) also vary by location among workers at the same education levels, says the CEW report. For workers with a high school diploma, median earnings are highest in Wyoming and Alaska ($2 million) and North Dakota ($1.9 million) — three states known for their energy and natural resources economies. These states are followed by Connecticut, Iowa, Indiana, Ohio, Wisconsin, Utah, and Louisiana, all of which have median lifetime earnings for high school diploma holders above $1.7 million. By contrast, the lowest median lifetime earnings for these workers are in Hawaii ($1.3 million), with Florida, the District of Columbia, New York and California following close behind ($1.4 million).

The District of Columbia has the highest lifetime earnings for bachelor’s degree holders, at $3.3 million; followed by Connecticut at $3.2 million; Virginia and Maryland at $3.1 million; Illinois, Ohio, Michigan, and Massachusetts at $3 million; and Minnesota and Alabama at $2.9 million. States with low lifetime earnings for workers with bachelor’s degrees include Hawaii ($2 million), Montana and Vermont ($2.3 million), and Florida and Maine ($2.4 million). 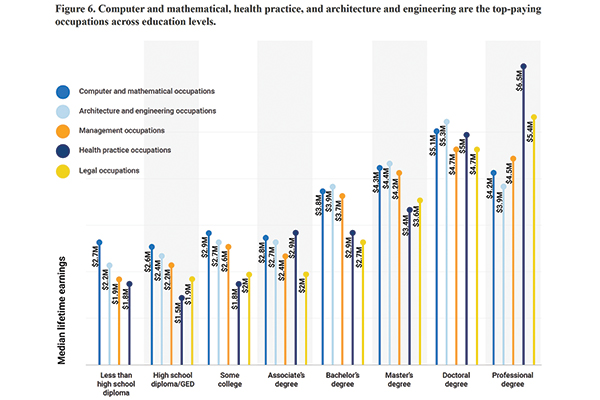 Figure 6. Computer and mathematical, health practice, and architecture and engineering are the top-paying occupations across education levels.

“Postsecondary education has become more valuable in the workforce, but its value is also part of a complex equation,” the report concludes. The pathways beyond just “going to college” are abundant and complex. The CEW says expanding and improving the career counseling system is one promising avenue.

“However, counselors are in short supply in most public schools, and colleges often separate academic and career counseling, which means that students’ academic programs may not be aligned with their career plans or with employment opportunities,” the report says. “Students should begin interacting with career counselors by middle school and continue interacting with them as they maneuver through the secondary and postsecondary education systems toward their careers. A comprehensive career counseling system would empower students by giving them the information and support they need to make informed decisions about their education and occupation that ultimately influence their lifelong earnings and well-being.”

“Students need professional guidance on the economic outcomes of college and career pathways before they make one of the biggest decisions of their lives,” said Ban Cheah, report author and CEW research professor and senior economist.