Coaching Can Be a Conduit for Companies Seeking Neurodiverse Talent 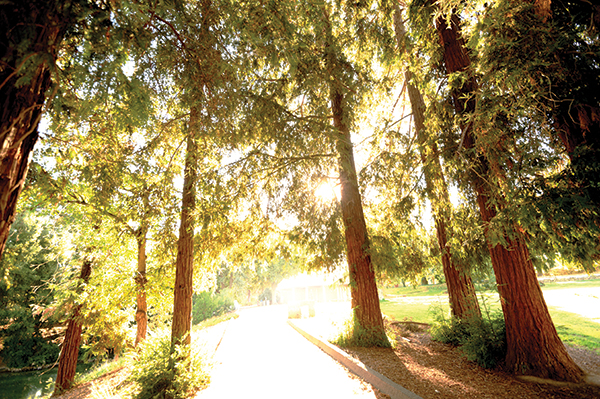 The University of California, Davis, in May 2021 opened applications for its new four-year Redwood SEED Scholars program (Supported Education to Elevate Diversity) serving students with intellectual disabilities. The program is named for the trees in the T. Elliot Weier Redwood Grove in the university’s Arboretum, in a Central Valley region where redwoods aren’t supposed to grow, but have thrived because of nurturing.
Photo by Gregory Urquiaga courtesy of UC Davis Arboretum and Public Garden
by Adam Bruns

The CDC says one in 54 children has been diagnosed with an autism spectrum disorder. With the assistance of his therapist and a keyboard, I talked to one of them — Mitchell Bennett, the 20-year-old brother of our daughter’s childhood classmate — about his hopes for finding meaningful work.

“I think my skills are individual to me, but I am capable of stocking and maintenance-type duties with proper supervision to not get distracted,” he says. “It might be best to keep me away from any liquids that can be dumped or sprayed. It is a sensory impulse that my autistic body cannot resist.”

A good-paying job to Bennett means “acceptance into a typical life process. A feeling of accomplishment. Hard work pays off. When you don’t get many opportunities it’s important to cherish those that do present themselves.”

A few years ago, says his mother Jennifer Bennett, it was hard to imagine sentences like that — heartbreaking as they are to her because of his self-awareness — flowing from her son. But the keyboard has unlocked wonders.

“He has this absolutely brilliant mind that was trapped in his brain all these years,” she says. “He needed this keyboard, and now he’s just fluid with everything.”

It’s the sort of hope that’s been all too rare during her son’s education process: “No one gives autistic people enough credit,” she says. “It’s about awareness.”

Growing awareness of a neurodiverse workforce is on the minds of corporate diversity, equity and inclusion officers and educational leaders. If there is one gap Jennifer Bennett thinks employers can fill, it’s the provision of job coaches, who in her experience in Georgia have been overwhelmed and underperforming, more concerned with checking boxes than checking in.

In an October 2021 column for Politico adapted from the book he co-authored with Louis Vismara, “The Autism Full Employment Act,” Michael Bernick, a Milken Institute fellow and the former director of the California Labor Department, describes how the lack of one-on-one coaching has held up progress. “Statistics are scarce,” he writes, “but the existing data suggests that only about one-third of adults on the autism spectrum work in paid jobs for more than 15 hours a week — and the rate has barely changed since 1991.”

"A key difference-maker is really looking at people as individuals and ensuring you integrate responsiveness to individual needs and strengths into any employment/career support,” she says. She says BMO, ATB and other banking institutions are leading the charge in welcoming neurodiverse employees. Most recently, Ernest & Young has established Neurodiversity Centers of Excellence in Alberta and BC, and Deloitte has partnered with Specialisterne Foundation to join the Autism@Work movement. Denmark-based Specialisterne aims to help create 1 million jobs in the neurodiverse community by 2030.

On the other end of Canada, Auticonsult, a global IT consulting firm that intentionally employs consultants on the autism spectrum, last year announced plans to have 100 employees in metro Montréal by 2023. Founded in Berlin, the company operates in eight countries and employs 300. More than 400,000 people are on the autism spectrum in Canada, the firm said. “Of these, over 80,000 are highly qualified and are perfectly capable of holding a job. However, less than 15% of them are employed.”

“Some companies choose to partner with these local community organizations to provide job coaches and other employment supports,” she says. Examples from the field include the supermarket chain Giant Eagle in Pittsburgh, which provides workplace supports for its employees with disabilities, including neurodiverse employees, through external service providers. “JPMorgan Chase’s Business Solutions Team [BeST] is another example of a neurodiversity hiring program that collaborates with state and local agencies for publicly funded job seeker support, but also commits company resources to job coaching when public funding is unavailable,” she says. “In addition, Microsoft has a Neurodiversity Hiring Program that includes supports such as job coaching.” At the federal level, a Neurodiverse Federal Workforce Pilot Program is underway.

While many corporate programs are tech focused, I asked EARN for examples of neurodiversity programs in the industrial and manufacturing sphere. Noting that these are examples and not endorsements, Bruyère says, “FALA Technologies in Kingston, New York, collaborates with a local Independent Living Center on a disability-inclusive apprenticeship model for advanced manufacturing. Other companies that have neurodiversity hiring/apprenticeship programs in the manufacturing/industrial field include New Way Air Bearings in Pennsylvania, G+W Electric in Illinois and DTE Energy in Michigan. Additional examples of companies with neurodiversity hiring programs can be found through Disability:IN’s Neurodiversity@Work Employer Roundtable.”

Those seeking to make neurodiversity part of their workforce development and CSR programs should visit EARN’s Neurodiversity in the Workplace webpage and use EARN’s Neurodiversity Inclusion: Checklist for Organizational Success. “Other recommendations,” says  Bruyère, “include identifying and cultivating community partnerships to assist with candidate referral; offering on-the-job supports, such as job training/coaching or revising the interview process to better fit neurodiverse candidates; and understanding that neurodivergent candidates are not homogenous and have talents, perspectives and skills that can be distinctly beneficial in many work environments.”

Jodi Asbell-Clarke, senior research scientist and director of STEM-based game research and design organization EdGE at TERC, is actively exploring how educational institutions can better serve the neurodiverse community. “I believe there are learners out there who are the critical problem-solvers of our future who are not being served well by our educational institutions,” she says. The head of one company’s neurodiversity initiative told her they were not in it out of pure altruism.

“They want the talent, and they are trying to change their environment to seize that talent,” she says. Neurodiverse talent often is geared toward pattern recognition, systematic thinking and persistence, with little regard for innuendo and nuance. “Who ouldn’t want somebody physically compelled to finish a task, and not let one ‘i’ go un-dotted?” she says. “That’s the QA person I want.”

What could companies do to better engage with neurodiverse individuals as potential employees?

“Be open to changing your perceptions about those with autism and other special needs,” says Mitchell Bennett. “We are present and aware of our surroundings though sometimes it appears that is not the case.”

“In the same way there are many skin colors and backgrounds, there are many ways brains work,” says Asbell-Clarke. “Old-school special ed is about fixing the kid. The neurodiversity movement is basically saying, ‘We don’t have a bunch of disabilities and symptoms you need to cure. Just make room for us in your world.’ ”

This story was produced as part of the Higher Education Media Fellowship at the Institute for Citizens & Scholars. The fellowship supports new reporting into issues related to post-secondary career and technical education.