The Connected City: How a New Pier is Bringing Everyone Together in St. Pete, FL 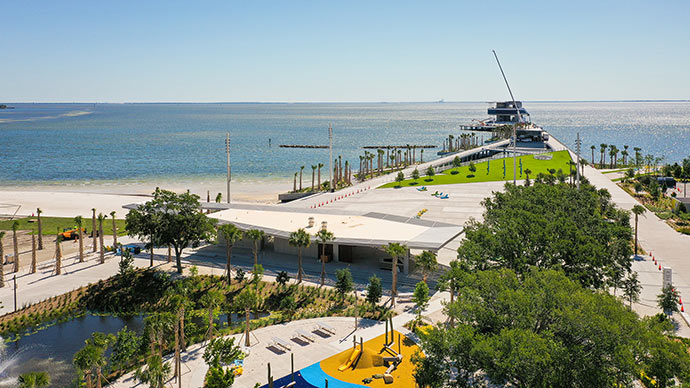 St. Petersburg Mayor Rick Kriseman is passionate about a lot of things when it comes to discussing his city of 265,000 people on the Gulf Coast of West Central Florida. But he seems to get especially animated when asked about the recent opening of the new St. Pete Pier.

Built at a cost of $80 million on the western shoreline of Tampa Bay, the St. Pete Pier is a playground unlike any other — literally.

“We’ve always had a pier, but we never had a pier district — until now,” says Kriseman. “We’ve had a pier since the 1800s, and our last iteration was an inverted pyramid. Now we have a pier district with an open-air market. We have one of the largest seasonal farmer’s markets in the country. We used to average up to 300,000 visitors to the pier each year. With the new St. Pete Pier, we anticipate attendance of a million people coming to the Pier District annually.”

Formally opened to the public on July 6, the St. Pete Pier is the culmination of a project a decade in the making. Kriseman says it’s worth the wait. Among the attractions: an open-air market with 17 vendors to start; a linear, green, leafy park that shades visitors as they walk; a colorful aerial net sculpture known as the Bending Arc; two main restaurants; a rooftop tiki bar; a fishing deck; access for kayaking and swimming; an open-air wet classroom; Discovery Center; beach volleyball; and a $1 million playground that Kriseman says is unique in Florida.

“Our forefathers did a wonderful job of preserving our waterfront,” the mayor notes. “Our waterfront is surrounded by parks. We added another 26 acres to that. You really get to take advantage of the waterfront now. When we host the St. Pete Grand Prix IndyCar race here each year, I love the aerial shots from that event. They really showcase our beautiful city.” 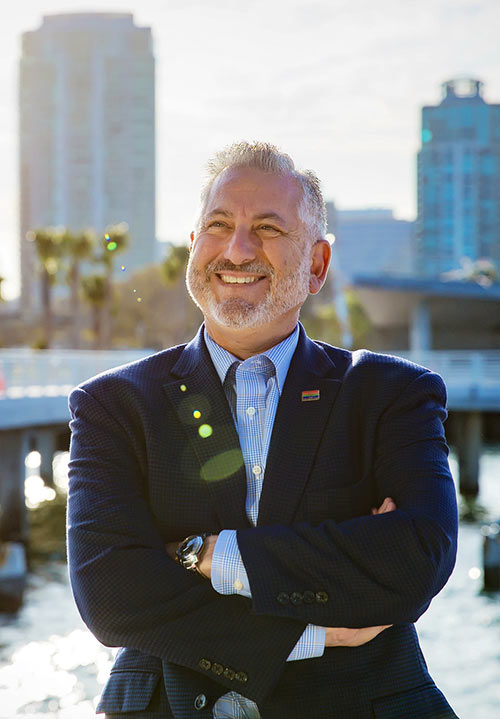 “We are the fifth largest city in Florida, but we feel like a smaller community. You can connect here immediately.”
– Rick Kriseman, Mayor of St. Petersburg, Florida, at the site of the new St. Pete Pier

Kriseman adds that St. Pete, home of both the Tampa Bay Rays of MLB and the Tampa Bay Rowdies soccer team of USL, boasts a very walkable downtown, a feature being amplified by the pedestrian-friendly pier district. “We have more museums than any other city our size in the country,” he says. “Soon, we’ll have the largest personally owned collection of arts and crafts open here. It will be 131,000 square feet over five stories.”

Attractions like the pier, the Grand Prix and the new museum make St. Pete feel like a more connected place, the mayor says. “We are the fifth largest city in Florida, but we feel like a smaller community. You can connect here immediately. For a lot of businesses, that is attractive. Any business needs to be able to recruit good quality employees, and in St. Pete it is very easy to do that because everyone wants to live here.”

Kriseman likes to say that “we are a city of parks.” The folks who come to these parks to play, he notes, could just be some of your best future employees.

This blog was produced under the auspices of the Greater St. Petersburg Area Economic Development Corporation.