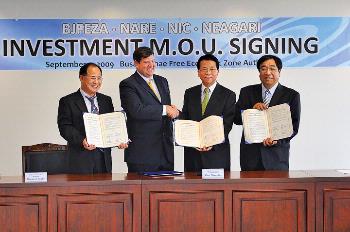 Officials representing three nations and four organizations joined forces on Sept. 2 to sign a memo of understanding. U.S.-based NIC teamed up with Neagari of Japan and Nare of Korea to lease manufacturing space in the Busan-Jinhae Free Economic Zone.
by RON STARNER
O

fficials of the Busan-Jinhae Free Economic Zone recently visited , and to promote the and Busan's new "eco-friendly logistics business model."

The goal of the global port at the southeastern tip of the Korean peninsula is to convince more American companies to invest in corporate facilities at the 26,000-acre (10,530-hectare) complex in northeast .

Established five years ago, the zone is showing signs of progress. On Sept. 2, the BJFEZ Authority signed a memorandum of understanding with an international consortium including NIC of the and Neagari of Japan for a site in the inside the zone.

The agreement calls for the joint venture of NIC, Neagari and Nare of Korea to lease 10,000 sq. m. of space for the purpose of manufacturing forged parts and machinery for the automotive and shipbuilding industries. The deal is valued at US$12 million.

The port's new green strategy aims to grow and attract alternative-energy-based operations. By 2015, the Busan Port Authority headquarters will be fully converted to solar power. The port will also provide a land-based power-supply service for container vessels while they are berthed — eliminating their need to burn fossil fuels while in port. In addition, the port uses electric vehicles and cranes.

Busan-Jinhae FEZ officials followed up their "green tour" with a second road show in October — one designed to promote tourism, leisure and shipbuilding R&D opportunities in the zone.

"With the selection of the Yongwon/STX consortium as the preferred bidder for the Free Economic Zone's Ungdong tourism project master developer, the authority [went] to the to promote the opportunities for tourism development to American developers," says Bill Woo, public relations director for the BJFEZ Authority. "The authority's investor relations department will pitch to developers in the hotel, resort, gambling and aquarium segments of the tourism industry."

The Ungdong Tourism Complex is a $246-million project designed to develop 2.26 million sq. m. of reclaimed land in and around Jaeduk-dong in .

BJFEZ is one of six major free economic zones being developed by the national government of . All six zones offer foreign investors a 100-percent abatement of corporate and income tax and a flat 17-percent income tax rate for foreign corporate executives.

New laws passed in 2008 made even more competitive against its rivals in . The corporate income tax rate was cut from 25 percent to 22 percent this year, and it will drop further to 20 percent by 2010.

Also, any foreign investor who invests more than US$500,000 and employs more than five Korean citizens is eligible to apply for permanent residency. Executives of foreign-based firms will be given travel cards that allow expedited entry into .

This investment profile was prepared under the auspices of the Busan-Jinhae Free Economic Zone Authority. For more information, contact Lee Sang-Hoon, Director-General, at 82-51-979-5440. On the Web, go to www.bjfez.net.