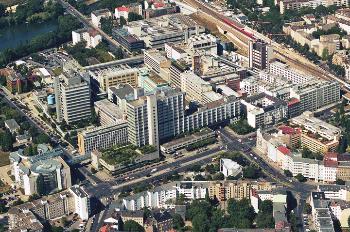 Redevelopment and a new airport boost the formerly divided city.

erging real estate portfolios after a corporate acquisition is never easy. When it involves a portfolio the size of a small city, the task becomes daunting. Such is the case in the heart of , where Bayer AG is digesting Schering AG's huge pharmaceutical and manufacturing complex following the companies' 2006 merger.

Schering had been a stand-alone company for more than 150 years, and had always been Berlin-based. Schering's massive headquarters complex encompasses an area of more than 180,000 sq. m. (1.9 million sq. ft.) in the middle of .

The site includes more than 90 buildings, some of which are nearly 100 years old. Most were constructed in the 1970s. The operation specializes in women's healthcare, diagnostic imaging and oncology. About 5,300 people work there, including 2,100 in R&D and 1,800 in production.

Now, three years after the acquisition, Bayer is addressing the long-term space requirements of Bayer Schering Pharma, which is part of Bayer Healthcare. The production facility was already remodeled in 2001, and some antiquated buildings are being removed from the site. Options under current consideration include construction of a new main office building to replace the current 15-story signature structure, and the subsequent renovation or demolition of the current building and construction of a second building on its footprint.

Bayer is also looking at designing space to improve the interaction among its scientists. A major goal of the project, which will be implemented over 30 years and may cost up to €140 million (US$207 million), is to create more of a campus feel on the site.

"We are at a stage where we have to build new buildings," says Dr. Maren Topf-Schleuning, head of real estate management for Bayer Schering Pharma.

'Many Options to Consider'

"What we have is a conglomerate of different types of buildings and functions," she explains. "Some of the buildings are old and therefore have to be remodeled or removed, which is in the long run cheaper than renovating. We need new office space and we need to integrate people better. There might also be a need for a new research building, and we must decide if we will have a new building in or if we will find the space in [North Rhine Wesphalia], where the pharma R&D facilities of Bayer are located."

Bayer Schering Pharma selected an architect from among eight international architectural firms to develop a site master plan for the huge complex. A 30-year plan will be developed to turn the site into a more user-friendly corporate campus. Bayer has a policy of pursuing sustainable development, and that will be an important part of the master plan.

"We have lots of space, so we can build a lot of other buildings without having to buy any other real estate," Topf-Schleuning says. "We will be considering many options. Do we want to change the laboratories, for instance?"

One possibility is to arrange all of the early research laboratories into one or two smaller buildings on the campus in order to foster better interaction among scientists to promote innovation. Topf-Schleuning says a decision will be made on the master plan in the spring of 2010.

"Relatively quickly we will have to decide either to build a new main building or to renovate the old building," she says. "The idea is to have the architecture that provides more of a campus atmosphere. It helps our research people. We want to add green space and attractive meeting points on the site for communication and for lunch breaks. The idea is to make the campus more attractive and more efficient."

How quickly the plan develops depends on the current global economic situation and how quickly Bayer AG approves funding. It may also depend on the input of Bayer AG's new CEO Marijn Dekkers, who was named on Sept. 15 to succeed current CEO Werner Wenning effective Oct. 1, 2010.

Work progresses around the clock in the former East Berlin toward a 2011 opening of a major new airport that many believe will transform the city into one of 's major air hubs as well as be an enormous economic engine in its own right. Berlin Brandenburg International Airport (BBI) will replace the adjacent , , which was closed in October 2008, and , which will close with the opening of BBI.

BBI will incorporate Schoenefeld's runway and a new runway, with a new, modern terminal in between. It will initially have a capacity of 25 million to 27 million passengers, and will open as experiences a period of major growth of air passengers in the city. 's three airports served 21.4 million passengers in 2008. BBI can be expanded to serve 40 to 45 million passengers as needed. BBI will give more direct flights to the and to , airport officials say.

"The current airport system cannot serve the number of passengers passing through ," says Ralf Kunkel, head of communications for Berlin Airports. "This is the most important infrastructure project in the region."

Kunkel says BBI will offer one hour reduced flying time from Asia compared to Western Europe's other major air hubs in Frankfurt, and , resulting in considerable cost saving for airlines. For example, a flight from to will be $10,000 cheaper to operate than to the other hubs, he says.

The project, including railway connection development and highway improvements, carries a price tag of more than €4 billion (US$5.9 billion). Surrounding development will also include , a complex of offices, shopping, restaurants, hotels and conference centers directly in front of the terminal. will be built northeast of the airport. This 109-hectare (269-acre) development will include plots for uses such as light manufacturing and distribution.

The new airport and surrounding development are expected to create several thousand new jobs, a much-needed boost since the city's unemployment rate has been in double digits since reunification.

is famous for its business and technology parks. It is home to the Berlin Adlersof, 's largest science and technology park, which opened in 1991. One of the city's newest parks is the Siemens Technopark. The park is one of six across operated by Siemens' Real Estate Group to develop the company's excess industrial property. The park, built on a Siemens industrial site that is more than 100 years old, was opened in 2006 and now is home to 3,600 people working with various companies.

One of those companies is BPO specialist Sitel. The company "went live" with its new call center in October 2008 with 150 employees. More than a year later, it has 500, with plans to grow to 1,000. Sitel's major customer is the German operations of T-Mobile. It also provides collections for BMW and services Lifescan, a healthcare company.

"We needed to decide where to grow the company in Europe," says Hartmut Anderer, vice president of business development for for Sitel. "We did a very thorough analysis of where we might go, of labor pools and public transportation. Most of the indicators pointed to . We found a big opportunity in Siemens Technopark. They made it flexible and scalable to our needs."

Anderer says is becoming increasingly important to the German and European markets. It has a large multilingual population, making it attractive for multinational companies. Sitel's employees speak a total of more than 20 languages, he says.

Sitel may outgrow its space at Siemens Technopark by sometime in 2010 and will face another decision. Anderer says the company will most likely expand in , but may take a look at Eastern European countries.

"We are also assessing the Russian market as a possible offshore location to serve and other Eastern European countries," Anderer says. 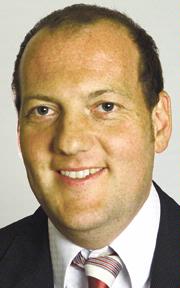 Hartmut Anderer is vice president of business development for Central EMEA for Sitel. 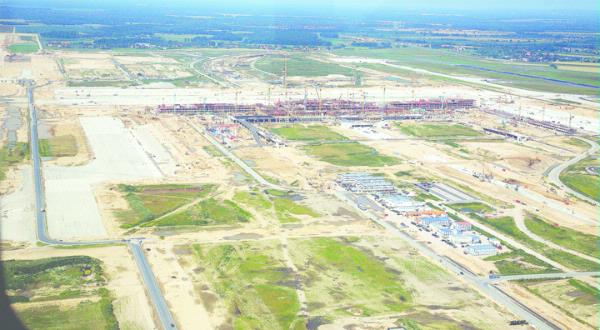