A region with thousands of college
graduates, many in the life sciences
sector, now has the work force for the
jobs requiring technical skills. 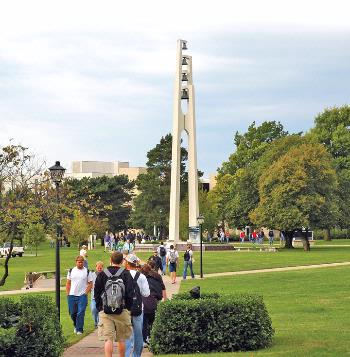 's Washburn Institute of Technology didn't exist until this year, but already it is meeting a critical need in the , job market, which is to supply existing and incoming companies with a technically trained work force that's ready to get to work.

In recent months, — 's largest four-year university — assumed management responsibilities for a consortium of local high schools that had developed a vocational technical program. The plan is to make the technical school — "Washburn Tech" — part of a higher education continuum, where students can enroll for a technical certificate, two-year associate degree or a four-year baccalaureate degree, depending on their area of interest.

"Data I have seen indicates that 70 or 75 percent of the jobs in this country — maybe more — do not require a baccalaureate degree," says Dr. Jerry Farley, president of . "So how can we fill those jobs in our part of the world?" At the same time, he adds, there is no shortage of baccalaureate-trained graduates in the 90-mile, , , to , , corridor in which sits midway. in has 23,500 students, the of at has 30,000, and Washburn adds 7,000 four-year students. "We're turning out an ample supply of baccalaureate-trained people," says Farley. "We just need to ramp up those with technical training. It's an entire system approach."

"GO is a publicly supported institution, and so we survive according to the generosity of others," he points out. "If the community thrives, we will thrive. If we can help the community thrive, we're helping ourselves. Economic development should be an inherent part of what we do. Every student that comes here wants to get a job, and every tuition-paying parent wants their child to get a great, broad-based education — and a job. We want to create economic development for our students."

Whereas the existing technical program trained sets of a dozen or so workers from such local employers as Goodyear and Frito-Lay, the new Washburn Tech campus will cater to hundreds of prospective trainees at a time, once the instructors (retired workers familiar with the systems and processes, in large part) and infrastructure are in place. A work force with knowledge of and practical experience in mechanical, electronic and related processes will play a key supporting role in the region's script for becoming a national center of life science — especially animal science — research and product development.

That agenda was advanced significantly in January 2009, when the U.S. Department of Homeland Security (DHS) selected Manhattan, Kan., as the location for its state-of the-art, high-security National Bio- and Agro-Defense Facility (NBAF) for the study of foreign animal and zoonotic (transferable from animal to human) diseases that can impact livestock.

"This decision completes a comprehensive three-year effort to ensure our ability to safely and effectively secure our nation's agriculture and food supply," said Homeland Security Under Secretary for Science and Technology Jay Cohen at the Jan. 16 announcement. "I accepted the NBAF DHS/Department of Agriculture Steering Committee's unanimous recommendation to build the NBAF in because it represents the best overall proposal on how to meet mission needs. I greatly appreciate the well thought-out proposals from over a dozen states and their consortia, which reflected the impressive capabilities of many communities."

DHS says construction will begin in 2010 and should take five years. The NBAF, it says, will provide a "secure, domestic, modern and integrated high-containment facility with laboratories for an estimated 250 to 350 scientists and support staff to safely and effectively address the accidental or intentional introduction into the of animal diseases of high consequence, including Foot-and-Mouth disease."

In mid-September, Gov. Mark Parkinson was in , meeting with DHS officials and members of Congress about securing funding for the NBAF; a Senate appropriations bill contained the necessary funding, but a House version of the bill did not.

Local and regional cooperation and a deep appreciation of the importance of the center to the area's life sciences ambitions were key to landing the NBAF in nearby .

United Front Made the Difference

"What turned the corner and probably helped cement the decision to locate NBAF in was the extraordinary collaboration between all the various constituencies that needed to come to the table for to secure that," says Lucky DeFries, stock holder at the law firm of Coffman, DeFries & Nothern and Chair of the GO Topeka Board. "That included our entire legislative delegation, all the state government officials — the leaders from the House and the Senate — and also, more importantly, officials from all the communities along the corridor, not just the officials lobbying for it. There were people from and and side by side with those from , because everybody knew that regardless of where that facility was located, it would have a tremendous impact on the ability of the other communities to attract other opportunities in the future.

Speaking of state legislators, is the state capital, which is a location plus, says DeFries. "We'd like to think there is an advantage to being the state capital. Certainly, legislators and others are more familiar with the companies here in than with those other than in their home communities," he points out. "Legislators are here from January through May, reading the paper every day and learning what's going on with companies in . Companies have access to the state government, and the regulatory officials are here, and we have a great community here. We have a long list of advantages in ."

And more are on the way as civic and business leaders ready the area for its close-up. By one estimate, about 200 companies have expressed interest in the area since the NBAF location decision was announced, and many of those will examine , as well.

" leaders understand we have a huge opportunity in front of us, and we're putting the pieces together to make sure we distinguish ourselves where we need to," says Neil Fisher, vice president of KBS Constructors, Inc., which specializes in building critical environment facilities, such as hospitals, data centers and research labs for life science companies. Fisher says KBS has built $40-million worth of research space at the Hill's Pet Nutrition headquarters. "It's having the land available, the lab space available and the educated work force — all this needs to be in place so we can be at the front of the line."

"Hill's Pet Nutrition, Inc., has a long and valued history with and has found its location in even more advantageous as the Animal Health Corridor gains momentum," says Neil Thompson, president and CEO. "Located in , Hill's also has a ready pipeline of top-tier graduates within a 300-mile radius, including veterinarians and other health professionals. Hill's and have a synergistic relationship that has helped the company become an industry leader in pet nutrition and has helped the community continue to thrive." 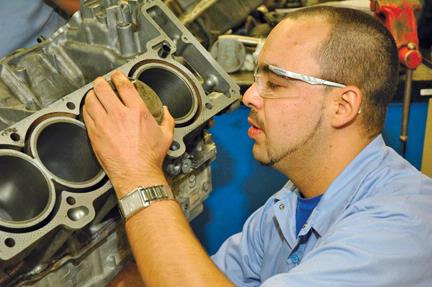 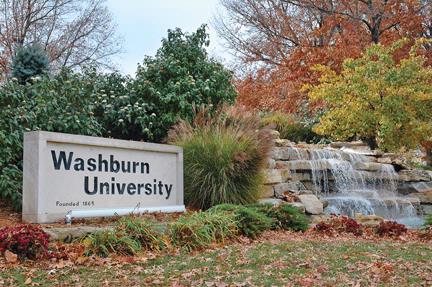 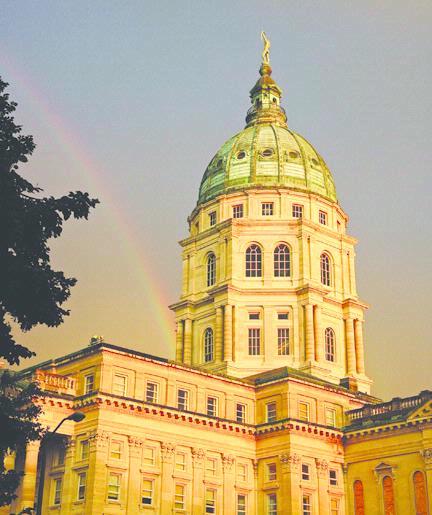 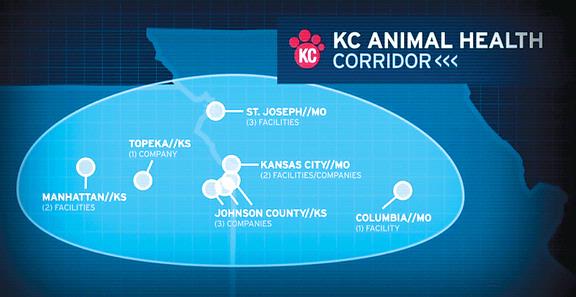 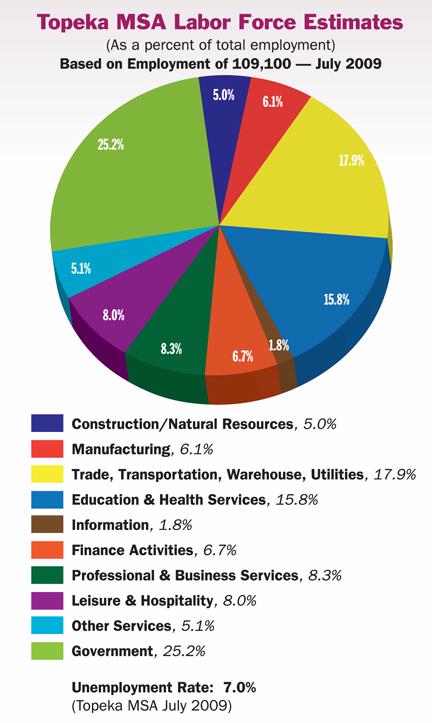 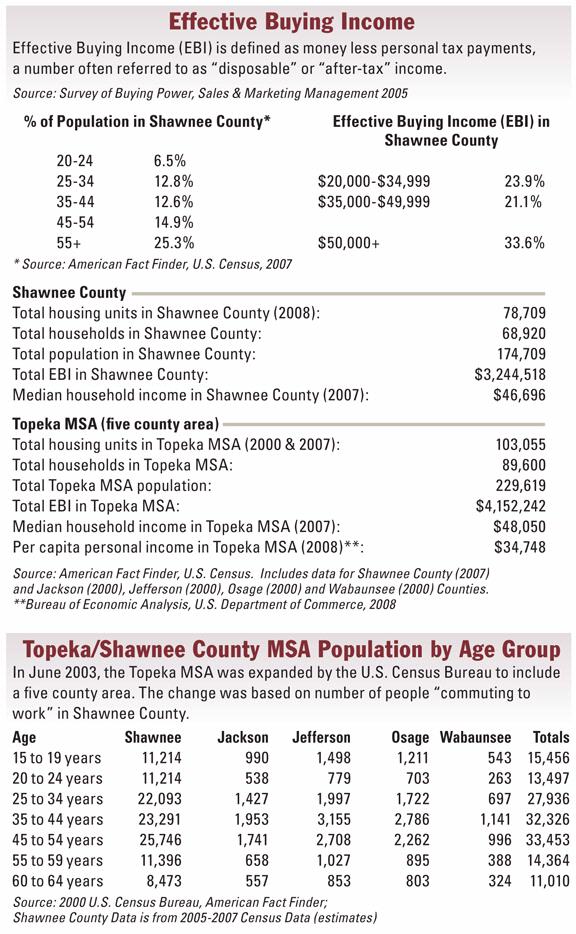 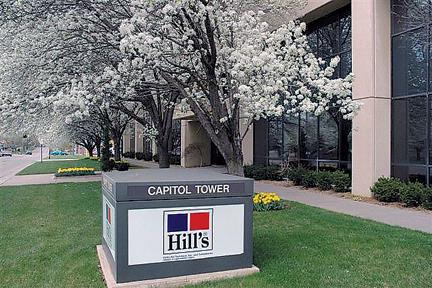 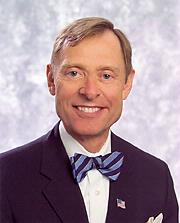 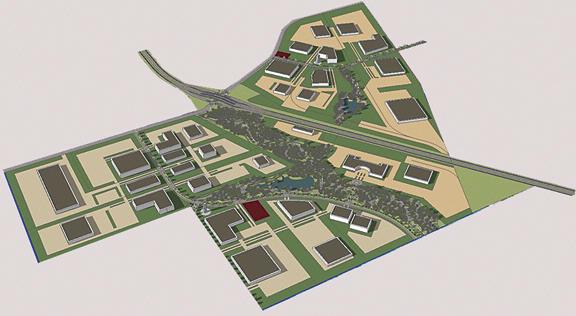 he is nearly fully occupied, so GO is in the process of acquiring land for a new business park. The land, comprised of 1,018 acres, is located south of and is bisected by US-75 highway. About 409 acres are east of US-75, and another 609 acres are west of US-75. The land provides 6,000 feet of rail exposure, primarily on the east side, and easy access to highways and airports, which will help attract businesses for whom these amenities are attractive. The new site will target businesses specializing in warehousing and manufacturing, alternative energy, biosciences and medical device manufacturing, as well as other target markets currently being analyzed.