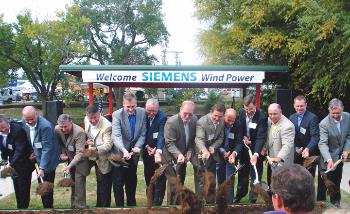 Siemens executives, along with state and local officials, break ground on the new nacelle plant in Hutchinson.

ansas ranks third behind North Dakota and Texas in wind energy potential among U.S. states. It also ranks 11th in wind project installation and was fourth in the amount of wind power capacity that was installed during 2008, according to American Wind Energy Association figures.

So, that logically puts the Sunflower State on the short lists of wind power equipment manufacturers. But until this year, a major manufacturer had not found its way to the state. That changed when Siemens Energy announced in May that it would build a nacelle assembly facility in Hutchinson, a city of about 42,000 about 40 miles (64 km.) northwest of Wichita.

The Hutchinson facility, to be located on a 108-acre (44-hectare) site, will be the first occupant of the Salt City Business Park. It also will be part of a growing global manufacturing network for Siemens, which entered the wind market in 2004 when it acquired Danish firm Bonus Energy. The plant, which will serve the Americas region, will employ 400 at full capacity. Its annual output will be 600 nacelles, enough to aid the generation of 1,500 MW of wind energy.

Siemens anticipates shipping the first nacelle from the factory in December 2010. The nacelles that are made at the Hutchinson facility will be used for the company's 2.3-MW wind turbine product family. Siemens currently ranks third in the U.S. wind market and sixth globally.

Due to the huge size of nacelles, logistics and location are always among the main considerations for siting a manufacturing facility, says Kevin Hazel, head of supply chain management for Siemens Energy's Americas Wind Power business unit.

"When we began looking for site, we knew we wanted to service the biggest portion of the wind market most efficiently," Hazel say. "We plotted the wind market and used industry data to map that market for the next 10 years."

That research led to the consideration of more than 80 sites in Kansas, Nebraska, Iowa and a small portion of Missouri. After assessing sites for distribution costs, costs of doing business, and the "build-ability" factor, Hazel's team narrowed its focus to one site each in Kansas, Nebraska and Iowa.

"At that point, we took a team of eight people with expertise in different areas such as human resources, operations and transportation. We held daylong meetings at each location in each discipline. The team used a ranking system to develop a score for each location.

"After all of that, we had a good comparison," Hazel says. "The beauty of America is that there are so many good sites and so many attractive, buildable locations with good incentive packages. It's a joy to be part of a group that is responsible to pick a site because you have such great options."

"Once we had the list of finalists, we considered some intangibles such as a gut feeling, the quality of people and the cooperation we saw between local officials, and we chose Kansas," says Hazel. "It was a combination of a classical site selection process and an awful lot of gut feeling."

State and local incentives also played a big role, Hazel says. These include tax abatements and $1.7 million from the American Recovery & Reinvestment Act for construction of a rail spur to the business park.

"We hope to have a pull-through effect where some of our suppliers will see the beauty of locating near us and shortening their logistics chain. If you look at the geography, Kansas is a terrific place to distribute from. It's rather under-built in wind energy at the moment, so there is a terrific upside in the state itself."

Hazel gives much credit to former Gov. Kathleen Sebelius for landing the project. It also helped that she was attending the Kansas State Fair in Hutchinson in September 2008, at the same time Siemens was looking at sites in the area.

"It happened to be Governor's Day at the fair," Hazel says. "Gov. Sebelius left the fair and came over to our meeting at the chamber of commerce. She told us she was ready to assist us and she would entertain any request within her power. We had some conversations with her in her office subsequent to that, and she was very true to her word. When she moved up [to U.S. Secretary of Health and Human Services], Gov. Mark Parkinson took over. In his prior role, he was responsible for the state's energy policy, so he was intimately involved in the project."

Hazel credits Dave Kerr, president of the Hutchinson/Reno County Chamber of Commerce for helping cement the deal. He says Kerr helped make things happen when they needed to happen during the site decision process.

"He was our key contact. Had it not been for him and his staff, we probably would not have selected Hutchinson," Hazel says. "It was a big deal for us to see that it was possible."

Hazel says Siemens tracks several forecasting agencies and all of them foresee a rebound year for wind projects in 2011.

"In 2008, U.S. installations totaled 8 gigawatts. 2009 will be 6 to 6.5 gigawatts, and we believe 2010 will be another rather low installation year, but then we will see a fairly good and strong rebound."

Siemens manufactures blades at its factory in Fort Madison, Iowa, and buys its towers from third parties. The nacelle assembly process requires skill in mechanics, hydraulics and electronics. Hazel says Siemens' turbine blades differ from others in that they are a one-piece design, vs. the "clamshell-like design" favored by other manufacturers.

Siemens currently manufactures its nacelles at the global headquarters of Siemens Wind Power A/A in Brande, Denmark. They are shipped to the U.S. through several ports, depending on final destination.

"It would be hard to overestimate what it means for our area," says Dave Kerr. "It's just exactly the kind of project we thought would be a perfect fit for our area of Kansas. Most of the potential wind power development sites in the region are within a day's drive of Hutchinson. So, we think we are extremely well positioned, both for big projects like Siemens, and also potential suppliers to Siemens and other companies."

Kerr says his organization viewed the Siemens project as a must win.

"From Kevin's first visit, we knew that this was a project that we would go all out to [make] successful," Kerr says of Hazel's initial inquiry. "We had a tremendously helpful partnership starting with then-Governor Kathleen Sebelius and then with Governor Mark Parkinson. The transition between the two was completely seamless as far as this project."

Kerr says Siemens' arrangement allows it to designate adjacent plots for its suppliers. By late September, one major supplier was already looking at the site, he says. 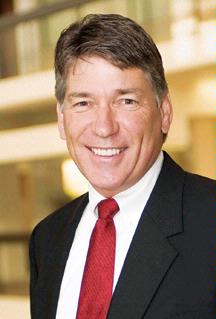 \It was a combination of a classical site selection process and an awful lot of gut feeling.\
— Kevin Hazel, head of supply chain management, Siemens Energy Americas Wind Power