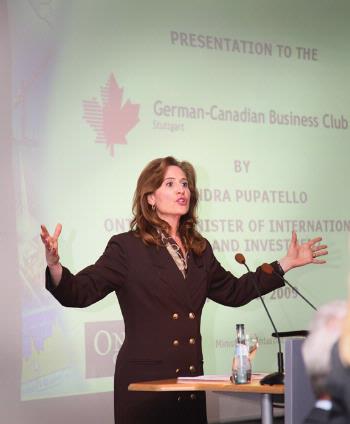 Sandra Pupatello is Ontario’s Minister of Economic Development and Trade.

is making a concerted effort to become 's next nexus of digital media. It took a large step when industry heavyweight Ubisoft, which has huge operations in Québec, announced in July it would create a major studio in . Ubisoft will invest C$500 million* in the project and will receive a C$263-million grant from the .

As Ubisoft develops, it figures to become the signature company of 's burgeoning industry.

"We've got a big push on in this sector," says Sandra Pupatello, 's Minister of Economic Development and Trade. "We have tremendous strengths here and we have seen a tremendous growth in the industry. Companies tell us that talent is everything and they have to be where the talent is."

's pursuit of Ubisoft was a three-year effort.

"I had a longer courtship with Ubisoft then I did my husband," Pupatello jokes. "We met here, in , and in Québec. We knew they were looking to do more in . We have a very successful smaller cluster, but we needed a publisher. For us, it was imperative that a company like Ubisoft come here."

Pupatello believes has a perfect lineup of companies across the sector in areas such as art, music and computer programming that are attracted by the region's skilled university graduates.

"These companies are telling us they are coming to because they want to stay home and get the skill sets we pay for," Pupatello says. "We are creating talented students for the sector. We want to level the playing field. There are lots of clusters around the globe, and companies know what each jurisdiction offers. Once you level the playing field, why wouldn't they pick ? They have to go where there are qualified people, and we know we have that."

Pupatello says the digital media industry is tied to the film sector, and may have another advantage there with the information and communications technologies (ICT) sector that clusters around .

"A lot of ICT technology applicable in the film industry is now moving into gaming," she says. "There may be a boom yet to be generated by these companies. There's such an obvious synergy."

Starz Animation has experienced rapid growth in over the past two years. The company has grown from 140 employees to 280 and has moved from working on one feature film to having three major projects in the pipeline.

"Being in gives us access to the city's great talent pool," says Jeff Young, CFO at Starz Animation. "For years, the college system here has delivered first-class animation talent. Since our arrival, we have seen a fantastic availability of talent who appreciate the opportunity to work in town on first-class, feature-level films. Heretofore, they would have had to go south of the border to work."

Young says also gives Starz access to some of the best software suppliers in the industry, which allows Starz to develop "leading-edge" technology and tools and create content at a high level, but at an affordable price.

The government has targeted interactive media. Combined federal and provincial tax credits can cut the cost of $100 in R&D to less than $46. Earlier this year, Starz Animation also received just over $22.9 million in funding from another program, the Government of Ontario's Next Generation of Jobs Fund.

"The Next Generation Fund is an industrial strategy to make a very strategic investment in the digital media sector," Young says. "In making that investment, they are looking for a world-class anchor tenant committed to the ."

Starz established its base in 2006 when its parent company, Liberty Media, acquired IDT Entertainment, which Young describes as having roots as a much smaller mom-and-pop studio.

Young says Starz Animation's goals are to maintain employment at close to 300 and consistently feed the pipeline with new products such as the film "9," released on Sept. 9. All animation for the film was done in the studio.

"Animation really is the true combination of artistry meeting technology," Young says. "We look for individuals with a solid foundation in the discipline of animation who are well versed in technical skills and software capabilities. We are very fortunate to have great schools here. Our emergence as a leading animation studio has done a lot to attract expats who went to back to and bring their toolsets from major studios such as Disney and DreamWorks." 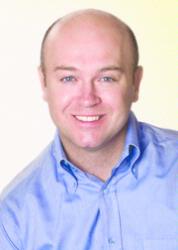 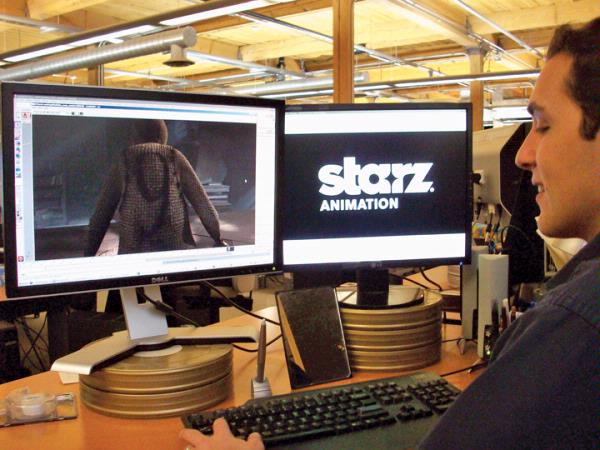 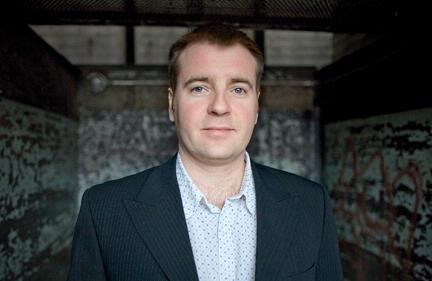 annis Mallat is CEO of Ubisoft Montréal and will also oversee the company's new studio. He recently responded by e-mail to questions regarding the Paris-based games publisher's decision to expand in .

Site Selection: What were the major factors that resulted in Ubisoft picking for its expansion?

Yannis Mallat: Ubisoft has been developing its network of internal production studios over the past few years, opening studios across the world (Asia, , , etc.) and is the latest created studio. There are many different factors that have been taken into account when making the decision to invest in , with the universities and colleges network there being one of the important factors.

Over the period of discussion, analysis and decision, we were in contact with a lot of different people and we only heard good things about the university programs that were already in place in the greater area. We were also aware of this through touring some universities in over the past few years to recruit young graduates for our Québec operations.

In addition to the educational system that is in place, there are other factors that were attractive for us. The relative closeness to the Ubisoft Montréal studio was a big part in our decision because of the potential of sharing the technology, expertise, tools and projects to ensure a smooth but strong development for the studio.

And finally, we can't answer this question without talking about the willingness of the Ontario Government to invest in the development of the video game industry in . Without their strong belief in the potential of this creative industry, this investment wouldn't have been made possible.

SS: How did their involvement influence your decision?

Mallat: The Government of Ontario has been key in this whole project. Without their open-minded approach, their confidence in the potential of our industry, we couldn't have made this a possibility. If you look at the process we have been going through in the , you can see that the impact of the government investing in an industry is significant. To answer your question succinctly, the Government of Ontario is giving us access to a Tax-Credit program to support the creation of 800 new jobs between now and 2019.

SS: Were other locations considered for this expansion?

Mallat: As a global and fast growing entity, yes, Ubisoft is often approached by governments or cities to open new facilities. The potential of the video game industry is enormous. The industry generates sales of billions worldwide, it is the fastest growing segment of the entertainment industry and most importantly, it creates quality jobs for the future.

SS: What is your opinion of the Toronto-based digital media sector in general?

Mallat: I truly believe that represents a strong potential for the development of our industry. The city is probably the economical capital of the country, huge companies like R.I.M. [Research In Motion, maker of the BlackBerry] are already well established in the region, and a few other players in the digital media sector are well represented.

I definitely see the potential for growth and most specifically for the video game production sector. I am sure that the Government of Ontario is definitely interested in continuing its efforts in developing the industry.