At the Center of a Bright Idea 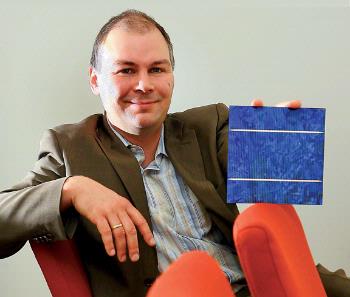 Dr. Jorg Bagdahn, Professor at the Hochschule Anhalt (FH) of photovoltaic materials in the Department of Electrical Engineering, Mechanical and Industrial Engineering, shows off a high-efficiency silicon wafer module that was developed by a team of research scientists at the Fraunhofer Center for Silicon Photovoltaics in Halle in Saxony-Anhalt, Germany.
Photo by Krumnow, Bannewitz

r. Jorg Bagdahn surrounds himself daily with the keenest minds in photovoltaic research and development. He's hoping that model replicates itself in similar choices by executives at world-leading solar energy manufacturing companies.

If the early returns of the Fraunhofer Center for Silicon Photovoltaics in Halle in Saxony-Anhalt, Germany, are any indication, then Bagdahn is well on his way to seeing his dream fulfilled.

As the head of the Center, Bagdahn oversees a research institute that is revolutionizing the way R&D is done in the photovoltaic sector. By spearheading research efforts that are producing greater-than-ever efficiencies in solar power conduction, Bagdahn and his team of scientists have positioned Saxony-Anhalt to remain the dominant global leader in solar energy technology.

"Photovoltaics supply 15,000 times more energy in one hour than is consumed in the world," says Bagdahn. "We have to exploit this potential."

Bagdahn, who at age 38 has already authored a doctoral dissertation on silicon, is now pursuing lower-cost and higher-efficiency solar energy through improvements in silicon crystal and solar module production.

The is at the center of his work. Founded in 2007 by the Fraunhofer Institute for Mechanics of Materials and the Institute for Solar Energy Systems, the Center is headquartered in Halle — the industrial capital of German photovoltaic manufacturing, also known as the Solar Valley of Central Germany.

The Center conducts research in the fields of silicon crystallization, thin-film technologies and the development of materials. Researchers at the institute manufacture and evaluate modules; they also carry out electrical, optical and micro-structural characterization of materials and components.

"At the end of 2006, we had at that time achieved the highest concentration of PV research and development in eastern ," says Bagdahn. "The political leadership here was interested in having a research center that would develop new technologies and foster a better connection between the region and the industry, in an effort to grow the industrial base of that sector here."

A plan was developed to build the research center in . "In the spring of 2007, the decision was made to invest €60 million (US$88.7 million) into founding a new research center," Bagdahn says. "We decided to focus our research on improving existing products that would pay off within one to three years."

A Lure to Top Scientists

Today, researchers work on the crystallization of silicon wafers and creating greater efficiencies in electric current. Some 40 scientists and another 20 students conduct experimental research on site.

Bagdahn also facilitated an exchange program with the Massachusetts Institute of Technology in , under which one Fraunhofer scientist attends MIT.

"This is a non-profit research institute," Bagdahn says. "The German government provides 25 percent of the institute's annual support. We have to raise the other 75 percent. About half of that comes from direct contract research, and the rest comes from grants from various organizations."

Students compete for selection to the center. "Together with a regional University and PV companies like Q-Cells and Sovello, we have one model for the students we choose to accept," says Bagdahn. "They have to go first to a company, which selects the student and provides financial support. Then, after they finish the program at the University, they must go to work for that company."

The result is a job placement rate of practically 100 percent.

Bagdahn says the major goal of the center is "to reach crystalline silicon area penetration in . We are focusing on the improvement of crystallization technologies and creating higher efficiency, and then integrating those cells into modules. We have also started projects in thin-film technologies."

The investments appear to be paying off. Today, more than 90 percent of all silicon solar cells made in come from the region anchored by Saxony-Anhalt. More than 20 percent of the production worldwide originates in this same region of eastern .

"In eastern , we have the special situation that allows companies to get financial support of up to 50 percent of their capital investment," Bagdahn says. "After the reunification of , the standard of living was lower here, so there has been a substantial financial incentive to get more companies to locate here."

Q-Cells SE and Sovello, two of the largest solar cell manufacturing companies in the world, operate large production facilities in , and other firms are rapidly expanding throughout the region.

Malibu GmbH & Co. KG has been granted official approval to begin production of a new type of thin-film solar module in Saxony-Anhalt. , a joint venture of E.ON AG and Schuco International KG, is investing more than €100 million (US$147.8 million) and creating 120 jobs at the plant near .

Q-Cells, the largest European producer of solar cells, plans to reach total employment of 5,000 workers and expand its core business to more than 1 gigawatt of capacity by 2010.

Sovello, a joint venture of REC of and Evergreen Solar of the , plans to increase production capacity to 600 megawatts by 2012 and create 900 jobs. The firm recently expanded its third factory in Saxony-Anhalt.

One more major establishment is coming from another Norwegian company. The cutting of the first sod for Vetro Solar in the middle of October marked the start of an investment of €23.5 million (US$34.7 million) and two new manufacturing halls for producing sheet glass.

"We are seeing interest in expansion activity in Saxony-Anhalt from solar energy manufacturing companies in , and ," Bagdahn says. "Companies that already have production in other locations are looking to come here for two reasons. One is that they find a situation with very good educational resources and an excellent work force. And secondly, is the biggest market in the world for photovoltaics. That is because of the laws we have here for supporting the industry."

ranks as the world's No. 1 photovoltaic market with 5.3 GW of capacity and 1,500 MW of newly installed PV power in 2008. Last year's investments into PV installations totaled €6.2 billion (US$9.2 billion).

The main driver of the PV market in is the German Renewable Energy Act, considered the most lucrative financial incentive in the world for solar energy. Installations occurring in 2009 receive a 20-year feed-in tariff of 31.94 to 43.01 euro-cents per kilowatt-hour.

The result of this legislation has been an unprecedented expansion in the German solar cell production sector and its supporting industries. German PV equipment manufacturers last year sold machinery worth €2.3 billion (US$3.4 billion).

Some 142 solar patents were registered in last year as a direct result of €190 million (US$281 million) of spending on R&D by solar cell companies in . In 2010, R&D investments of €224 million (US$331 million) are predicted for the PV sector, as double-digit growth is forecast for years to come.

"This is a very stable market. People are buying modules here," says Bagdahn. "Companies are checking to see if they can build a factory here so that they can have a better connection to the local market."

This editorial profile was published under the auspices of the Investment and Marketing Corporation of Saxony-Anhalt. For more information on investment opportunities in Saxony-Anhalt, contact Dr. Carlhans Uhle by phone at +49 (0) 391-568-9912 or by e-mail at carlhans.uhle@img-sachsen-anhalt.de. On the Web, go to www.invest-in-saxony-anhalt.de. 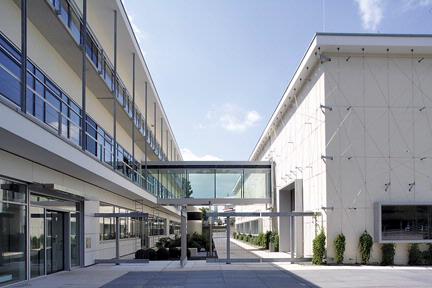 The Fraunhofer Center for Silicon Photovoltaics was established in 2007 to facilitate groundbreaking research in solar energy conduction. Some 142 solar patents were registered in Germany last year as a direct result of US$281 million of spending on R&D by solar cell companies in Germany.
Photo by Krumnow, Bannewitz 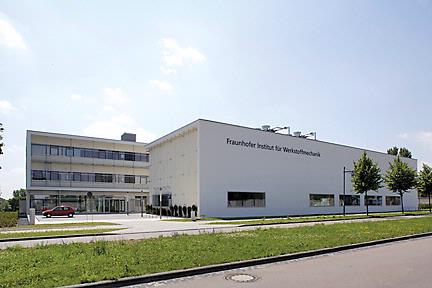