A wind energy firm ramps up in Chattanooga. 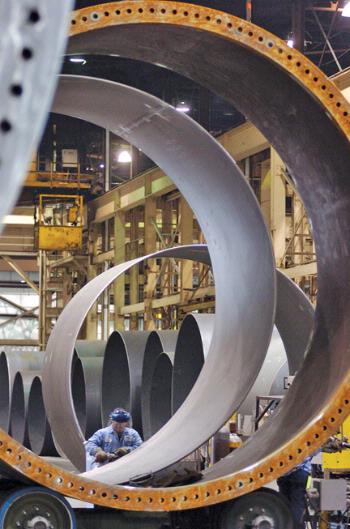 Schaff Industrie AG (SIAG), a company with a long history in the steel construction business, took control of Aerisyn LLC on Aug. 24 with big plans for expansion. The project is the latest in a string of major investments in the state by German companies, following projects by Volkswagen and Wacker Chemie.

Bernd Becker, president of SIAG Aerisyn, says it was a case of an experienced company taking over a firm that had been in "start-up mode the last five years." Acquiring an existing base gives SIAG a running start in its effort to attack the U.S. wind energy market in a big way.

"It's a win-win on both sides," Becker says. "SIAG is a market leader in Europe and needed to expand in the U.S. With Aerisyn they found a very good partner with everything available, including machines and a plant. It cut away the whole greenfield project timeline. Aerisyn had some difficulties because there are always challenges in a startup. During our learning phase, we will be transferring technology from Europe to the U.S. and hiring people in the skilled trades, process engineers and so on."

Becker says that lack of proximity to customers is not an issue for the company.

"We are certain that with our know-how and our quality performance and reliability, we can offset the potential issues of distance that might be out there," Becker says. "A lot of the [wind equipment] suppliers are in the Midwest, but not one of our American tower competitors will be able to compete with our experience in the industry. We can offset this [distance issue] pretty easy. With the entry of SIAG into the North America market, you will find a company that already had decades of experience in tower manufacturing in Europe."

SIAG has rail access to transport its huge tower components, and the use of barges on the nearby Tennessee River is also an option.

SIAG will be hiring highly skilled welders as it ramps up, and has already created an education program with Chattanooga State University.

"The SIAG requirements for quality exceed American Welding Association standards," Becker says. "As a global player we have as a company policy higher standards, and by taking over this facility, we must raise the level of experience and knowledge."

SIAG already has plans to expand in the Great Lakes region within the next five years, Becker says. The company, which plans to have global annual capacity of 1,600 towers by 2010, already has wind tower plants in Germany, France, the Czech Republic and Egypt.

Chattanooga's biggest ongoing industrial project, the $1-billion Volkswagen plant, continues to progress on schedule. All buildings at the site will be completed by the end of 2010, and the plant will employ more than 2,000 when it opens in 2011. It is designed for an annual capacity of 150,000 vehicles.

"A presence on international markets is a prerequisite for economic success," Wulff said during his visit. "For me, Volkswagen's new plant in Chattanooga is an excellent example of the dynamic and successful internationalism of Lower Saxony's industry."

While VW is still expected to draw suppliers to the region, just one major firm has arrived so far. The VW plant attracted its first Tier 1 supplier to Chattanooga in June when Gestamp Corp. announced it would invest $90 million and create 230 jobs within three years with an automotive parts stamping operation. Gestamp will supply structural components for the new mid-sized sedan that Volkswagen will build at its plant. Gestamp Corp., which is headquartered in Michigan, is a subsidiary of Gestamp Automocion, a company based in Madrid.

"I firmly believe the excellent business climate and skilled work force of Chattanooga and Tennessee will allow us to benefit from the same qualities Volkswagen found here and to continue our company's long-term growth," said Jeff Wilson, Gestamp's president and COO.

BJS North America East, a Swedish furniture manufacturer and a new supplier to IKEA, opened a new 95,000-sq.-ft. (8,825-sq.-m) factory in Dandridge on Oct. 16. BJS will manufacture tables, headboards, chests and other products using medium density fiberboard at the facility, which will create about 150 jobs and receive an investment of between $6 million and $8 million.

BJS officials said they chose Dandridge, a city of about 2,000 people, for proximity to Interstate highways. Located about 30 miles (48 km.) east of Knoxville, Dandridge is near the intersection of Interstates 40 and 81.

Unilever is investing $100 million to expand its Covington plant and create about 275 jobs. The Covington facility currently produces Slim-Fast and will now add the manufacture of ice cream and frozen novelties to its production line. 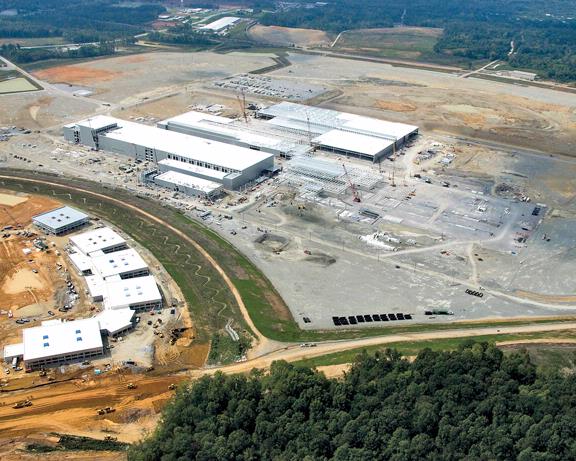 Volkswagen’s $1-billion plant in Chattanooga will employ more than 2,000 people. 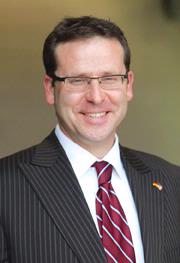