For the National Cancer Institute, curing a space problem
may lend a hand to the ultimate mission. 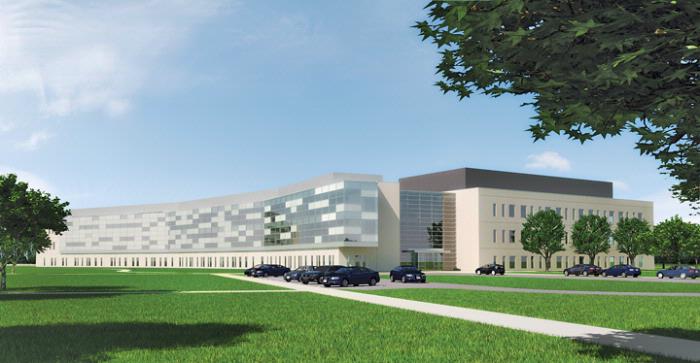 The National Cancer Institute’s Advanced Technology Research Facility (ATRF) at Riverside Research Park in Frederick, Md., will be the only Federally Funded Research and Development Center (FFRDC) in the country focused exclusively on biomedical R&D.
Image courtesy of the Matan Companies
by ADAM BRUNS
T

en months from groundbreaking to financing completion: In the best of times, one might look askance at such a delay. In today's economy it counts as a solid success.

On Sept. 30, the Matan Companies announced they had teamed with Federal Capital Partners (FCP) to complete the US$52-million financing from Wells Fargo and US Bank for the development of the National Cancer Institute's 330,000-sq.-ft. (30,657-sq.-m.) Advanced Technology Research Facility (ATRF) at Riverside Research Park in Frederick, Md. The range of operations encompasses proteomics, genomics and other translational research disciplines, including a bio-pharmacological manufacturing capability.

What's more, the 62-acre (25-hectare) campus has room to expand by another 570,000 sq. ft. (52,953 sq. m.), reserved for life-science and advanced technology partners. With SAIC-Frederick, Inc. as its prime contractor, the new facility will be the only Federally Funded Research and Development Center (FFRDC) in the country focused exclusively on biomedical research and development, and concerted technology and R&D partnership efforts toward reducing the burden of cancer.

"We spent a lot of time and energy reviewing particular details of the lease, expertly negotiated by the borrower," says Jeff Jacobson, CFA, senior vice president at US Bank Commercial Real Estate in McLean, Va., who co-agented the deal with Wells Fargo. "I was introduced to the project and went to the groundbreaking in November 2008. It took a good concerted six months of effort to close the deal, once it was definitively moving forward."

"Today's financing environment demands creative approaches to bring large, high-profile projects like this to the market," said Mark Matan, principal of the Matan Companies. "The ATRF is one of the largest private biotech developments in the country to secure construction financing and it is a credit to everyone involved." Other involved parties included Cassidy and Pinkard, which helped to secure the equity and debt for the transaction, and Jones Lang LaSalle, which represented the tenant.

Asked to describe unique or creative aspects of the financing arrangement, Dan Milligan, finance/investment manager for the Matan Companies, says, "One of the larger obstacles was to balance the need for the flexibility of the tenant with the need of certainty for the lenders. Because of the flexible nature of government contracts, it was critical for the players to fully understand the core mission of this facility and the importance of and commitment to our nation's cancer research effort. Also, assembling a strong team possessing local knowledge and regional presence was key to satisfying the banks."

"What the site does for us is provide a place to move many of our operations that support this translational research mission," says Frank Blanchard, director, public affairs, SAIC-Frederick, Inc., which employs approximately 1,880 people as the primary contractor to NCI.

The existing location of NCI is 68 acres (28 hectares) inside the fence at Fort Detrick, much of it built in the 1950s, and renovated many times since, says Blanchard, with various biopharma activities scattered across approximately 33 buildings, ranging from modern structures to trailers.

One interested party describes the 1.3 million sq. ft. (120,770 sq. m.) at Fort Detrick as "not just functionally obsolete, but in many cases absolutely obsolete. Some [space] is so bad it's embarrassing that cancer research was taking place in that kind of environment."

In other words, the opportunity Riverside presents is akin to a dream realized for NCI and its existing and prospective partners.

"We've been patching it together over the years," says Blanchard. "Other operations were scattered about as well. This will consolidate everything, and increase efficiencies."

Asked how much money the shift will save, Blanchard says, "I cannot find that we did such an analysis. The focus has always been on consolidating staff at the one location, and we do not have adequate facilities for that on-site. It also gives us the space and flexibility to do partnering."

Though operations will continue at the Fort Detrick site, Blanchard says there's the possibility that some other satellite locations could be consolidated at the new site. Blanchard says the facility will "bring together not only commercial enterprises, but also there's the possibility that we'll get a business incubator out there that will be a resource for businesses that will spin out of this research. The whole project is driven by an NCI initiative to translate results into medicine for cancer patients. The research enterprise has produced vast numbers of great ideas, but getting those ideas into the marketplace has been a tremendous challenge."

"Researchers from private industry will literally sit alongside their NIH brethren and hash out what they're working on together," says US Bank's Jacobson, who calls the facility a "fascinating project" in part because of the small-scale manufacturing capability, and the cradle-to-grave control of the drug development process. He says some subleasing might occur, but it won't affect the lenders at all.

So what made this project "financeable" in a climate where so many projects seemingly are not?

"100-percent pre-leased to, ultimately, a federal government tenant," says Jacobson, before explaining that it's really not that simple. "We took our comfort in the fact that this is a very important facility for the NCI, and they have committed contractually to not only completing a significant above-base shell build-out, in excess of $400 a sq. ft., but also they're contractually committed to have over 250 employees on site prior to any subject-to-appropriation risk."

"Given the current economy, this deal would not have been done with a single lender," says Milligan. "Today's more complex deals will require a 'club' of lenders who have worked together before and who recognize the benefits of sharing risk."

"Look, it's tough out there," says Jacobson. "It's a lot easier if you have a government lease, obviously. But we're starting to see some very slow movement in the marketplace. We never stopped doing things, but we're now starting to do a little more."

"Those who ended up providing financing for this deal were those who, even in the face of the most challenging economy in a generation, were able to see and understand the big picture," says Milligan. "This facility will serve as a springboard for a new way of thinking about curing and eliminating the suffering caused by cancer and, tough economy aside, people wanted to be part of the solution."

"It's not often that folks sitting in my chair can not only do something good for our clients, developers and shareholders, but also advance the cause of humanity," he says. "So I'm proud to be part of it."