Even for Amazon, four big projects pledging 8,000 new jobs announced over the past 17 days is an above-average pace. 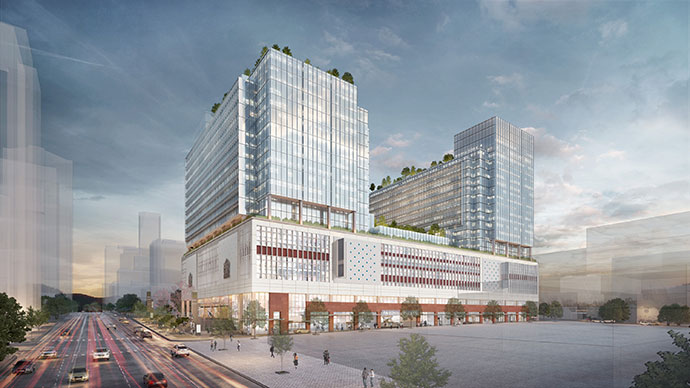 “Amazon’s significant presence at The Post marks a defining moment for Vancouver’s growing knowledge sector and an important catalyst for B.C.’s economy," said Dennis Lopez, CEO of QuadReal, which is redeveloping the iconic Canada Post building. Amazon will occupy 35 per cent of The Post’s 1.13 million sq. ft.
by ADAM BRUNS 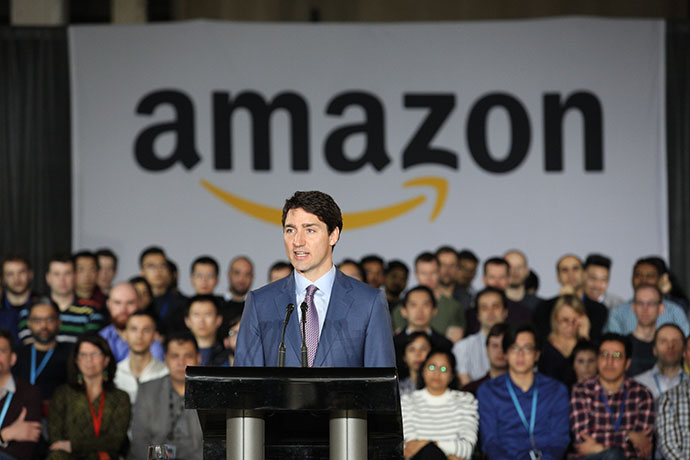 "Our vibrant cities, which are home to some of the best talent in the world, are poised to attract premier investment that creates the jobs of tomorrow," said Canadian Prime Minister Justin Trudeau at Amazon's April 30 announcement of 3,000 new jobs in Vancouver.
Photo courtesy of QuadReal

Would you rather have the chance at HQ2 later or thousands of high-tech Amazon jobs now? One Canadian city and one HQ2 finalist city weren't given that choice, but happily welcomed the latter over a 24-hour span beginning the month of May.

Two weeks later, the company's breakneck pace in opening and expanding e-commerce fulfillment sites continued, adding 3,000 more jobs to its future payroll with a pair of 1,500-job facilities in Greater Columbus, Ohio, and Tucson, Arizona — the same city that took some jeers for sending the company a Saguaro to remember it by when the whole HQ2 sweepstakes got rolling last year. (Amazon politely sent it back to a friendly home in southern Arizona.)

It's almost enough good news to make Amazon forget about the "head tax" on large employers passed this week by the Seattle City Council, enabling the city to collect an annual tax of $275 per full-time employee on the City's 585 large businesses (those with revenues of more than $20 million, or about 3 percent of all businesses).

About a three-hour drive north of that city hall, company officials got together with their pal Justin Trudeau, prime minister of Canada, on April 30 at the historic Canada Post building in Vancouver, British Columbia, to announce an expansion of Amazon's Vancouver Tech Hub that will create 3,000 jobs in fields including e-commerce technology, cloud computing, and machine learning. That adds to the total of over 6,000 Amazon already employs at the 416,000-sq.-ft. development center.

"We are home to the fastest growing, most resilient and greenest economy in Canada," said Vancouver Mayor Gregor Robertson, "and Amazon's major expansion in our city means more long-term jobs for people who want to live, work and build a future in Vancouver."

"Vancouver is home to an incredibly talented and diverse workforce, and these thousands of new employees will invent on behalf of our customers worldwide," said Alexandre Gagnon, vice president of Amazon Canada and Mexico. "Thank you to Prime Minister Trudeau, Mayor Robertson, and all our partners across Vancouver and Canada for welcoming us and helping to foster a strong local innovation economy."

Amazon will expand into a brand new location in QuadReal's The Post redevelopment of the landmark Canada Post building when the project opens in 2022. The company's current Vancouver offices include a 156,000-sq.-ft. location in TELUS Garden which opened to Amazon employees in 2015. Amazon also confirmed last November its plans to expand into another downtown site on Dunsmuir Street, which will open in 2020. The company expects to grow to 5,000 corporate employees in Vancouver in the coming years across all of its locations in the city.

Boston is one of the 20 finalists for Amazon HQ2, but it's not too far-fetched to say the area might be out of the running now, thanks to Amazon's announcement within 24 hours of the Vancouver news that it would lease 430,000 sq. ft. at WS Development's 23-acre Boston Seaport development and create 2,000 new jobs in fields including machine learning, speech science, cloud computing, and robotics engineering. "Together with its customer fulfillment facilities, Amazon has created more than 3,500 jobs in Massachusetts and since 2011 invested over $400 million in the state," the company stated.

"In just a few years, we've grown from a handful of software developers and scientists to a team of more than 1,200, inventing new capabilities and products on behalf of millions of customers around the world," said Rohit Prasad, Amazon's, vice president and head scientist of Amazon Alexa, who is based in the Boston area. Amazon said its teams in the Boston metro area primarily focus on Alexa, Amazon Web Services, and Audible. 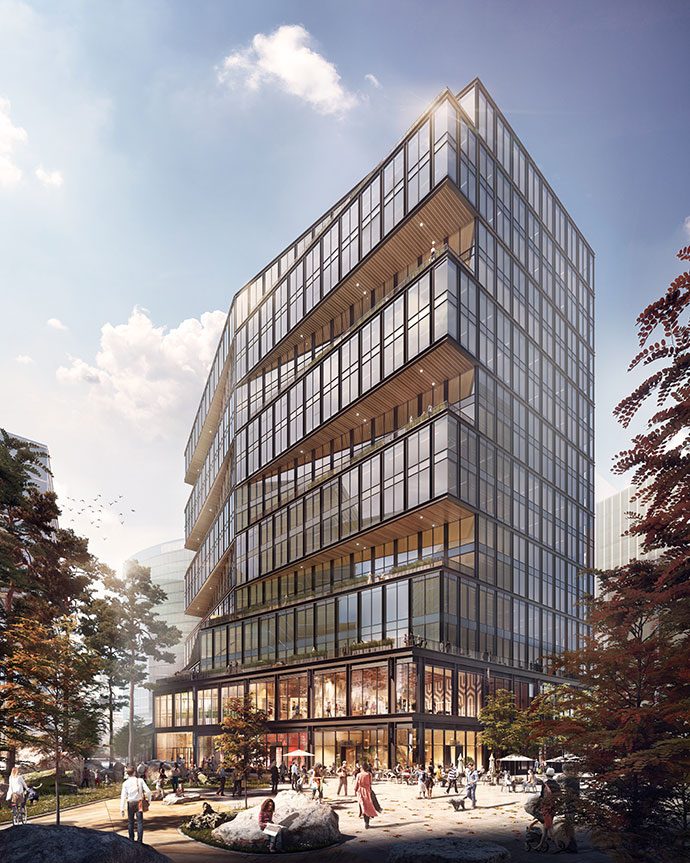 Amazon's new Tech Hub in Boston's Seaport will create 2,000 tech jobs in the city. Amazon will occupy all of the office space in the building to be constructed on Block L4 of the Boston Seaport development, a 17-story mixed-use building designed by a collaboration of Gensler's Sa Francisco and Boston offices.
Rendering courtesy of Amazon

The site will open in 2021 at the Seaport, where a total of 7.6 million sq. ft. are being developed. This site has a Canadian angle too: WS Development's partner at the Seaport is Public Sector Pension Investment Board (PSP Investments), one of Canada's largest pension investment managers, which manages net contributions to the pension funds of the federal Public Service, the Canadian Forces, the Royal Canadian Mounted Police and the Reserve Force. "Amazon's presence will further strengthen the innovation ecosystem and creative economy in this burgeoning technology cluster," said Kristopher Wojtecki, managing director, real estate for PSP Investments.

"Massachusetts' innovation economy is powered by a talented workforce, exceptional educational institutions and companies like Amazon at the forefront of research and development," said Governor Charlie Baker. "Amazon's expansion in the Seaport will bring thousands of new jobs to the Commonwealth and build upon the hundreds of jobs they already have here in research and development, fulfillment centers and robotics."

"The construction of this new facility is expected to generate additional funding for job training programs in Boston, providing opportunities for Amazon to work with the city's Workforce Development team to prepare local residents for jobs in the technology industry," said the company. That's just part of overall investment in the fabric of the neighborhood and its workforce, explained WS:

"The development of the building housing Amazon's new offices will also result in the construction of numerous district-wide transportation improvements, including new protected bicycle infrastructure, a new MBTA Silver Line headhouse at Courthouse Station, and numerous streetscape improvements throughout the Seaport that will significantly improve district-wide mobility and the quality of the public realm in the Seaport neighborhood," said the developer. "The project will also fund approximately $4.4 million dedicated to the creation of affordable housing in Boston, as well as $875,000 of funding for job training in the City of Boston."

In 2013, Amazon opened its corporate office in Cambridge, which has served as the anchor for its Boston Tech Hub – one of more than a dozen Tech Hubs nationwide. The company has recently added additional offices in Back Bay and the Fort Point neighborhoods, in addition to the Amazon Robotics development center in North Reading.

Amazon took a bit of a breather after the Boston news — but not for long.

We are excited to open a new, state-of-the-art fulfillment center in West Jefferson, and to continue innovating in Ohio — a state committed to providing great opportunities for jobs and customer experience," said Mark Stewart, Amazon's vice president of North America Customer Fulfillment. "Amazon is committed to providing great opportunities for employment and creating a positive economic impact for the region. Our growth in Ohio is the result of an outstanding workforce and incredible customers and we are proud to be adding 1,500 new jobs to the more than 6,000 Amazonians already working in the state."

"Amazon has been an outstanding partner in Ohio, and the West Jefferson investment demonstrates the company's ongoing confidence in this state's talent and logistical advantages," said Ted Griffith, JobsOhio managing director for logistics and distribution. "Its newest fulfillment center will be Amazon's fourth in the Central Ohio region and will bring 1,500 new jobs that will provide health care on day one."

"Amazon is quickly becoming one of the Columbus Region's largest and most important employers," said Kenny McDonald, president and CEO, Columbus 2020. "This project underscores how our strategic location and infrastructure helps the company fulfill their customers' needs.

Amazon has invested over $2 billion in the state since 2011.

Two days later, the company announced plans to open its first fulfillment center in Tucson, creating more than 1,500 full-time jobs at a new 855,000-sq.-ft. facility being developed by Seefried Industrial Properties. Amazon currently employs more than 7,000 full-time associates at its four existing Arizona fulfillment centers and other facilities throughout the state.

"Since we first broke ground in Arizona over 10 years ago, we have found a network of support from community leaders to statewide officials, a dedicated workforce and fantastic customers," said Mark Stewart.

Since 2007, Amazon has invested billions of dollars into its local fulfillment center infrastructure and through compensation to thousands of employees in Arizona. Between 2011 and 2016, Amazon's investments in the state contributed an additional $900 million into Arizona's economy, "and using methodology developed by the U.S. Bureau of Economic Analysis, Amazon estimates its investments in the state have created an additional 18,000 indirect jobs on top of the company's direct hires," the company stated.

"Amazon's selection of Tucson for this impressive new facility demonstrates that southern Arizona has a lot to offer businesses in terms of talent, location, pro-business environment and quality of life," said Arizona Governor Doug Ducey.

In his own statement about the project, Sun Corridor Inc. President and CEO Joe Snell wrote about that famous cactus — a gesture some lampooned, but nobody's laughing at now.

"Many of you remember our bold move with a cactus gift to Amazon last fall," he wrote. "We sent a compelling message that we have room for Amazon to grow here, and nothing signified that better than a Saguaro cactus."

He went on to say the project is the result of a "very competitive eight-month process, and illustrates the power of collaboration in achieving economic development success. Project partners include Governor Doug Ducey, Arizona Commerce Authority, Pima County, City of Tucson and Tucson Electric Power."

"This announcement of 1,500 new jobs with Amazon, one of the world's largest brand names, is huge for Southern Arizona," said David G. Hutchens, chair, Sun Corridor Inc. and president & CEO, UNS Energy Corp., Tucson Electric Power & UniSource Energy Services. "The ripple effect of a project of this magnitude will benefit the region for many years down the road."

Leaders and potential employees in all four cities chosen by Amazon this month hope that is indeed the case. 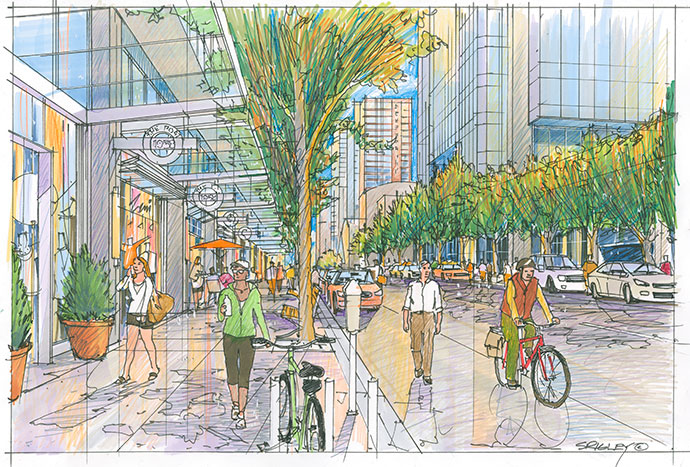 Pedestrian- and transit-oriented, the area around The Post in Vancouver is steps from Rogers Arena, BC Place, QE Playhouse, and the library, as well as the future home of the Vancouver Art Gallery and False Creek Entertainment District.