Fields of Plenty: The Promise of Solar Energy 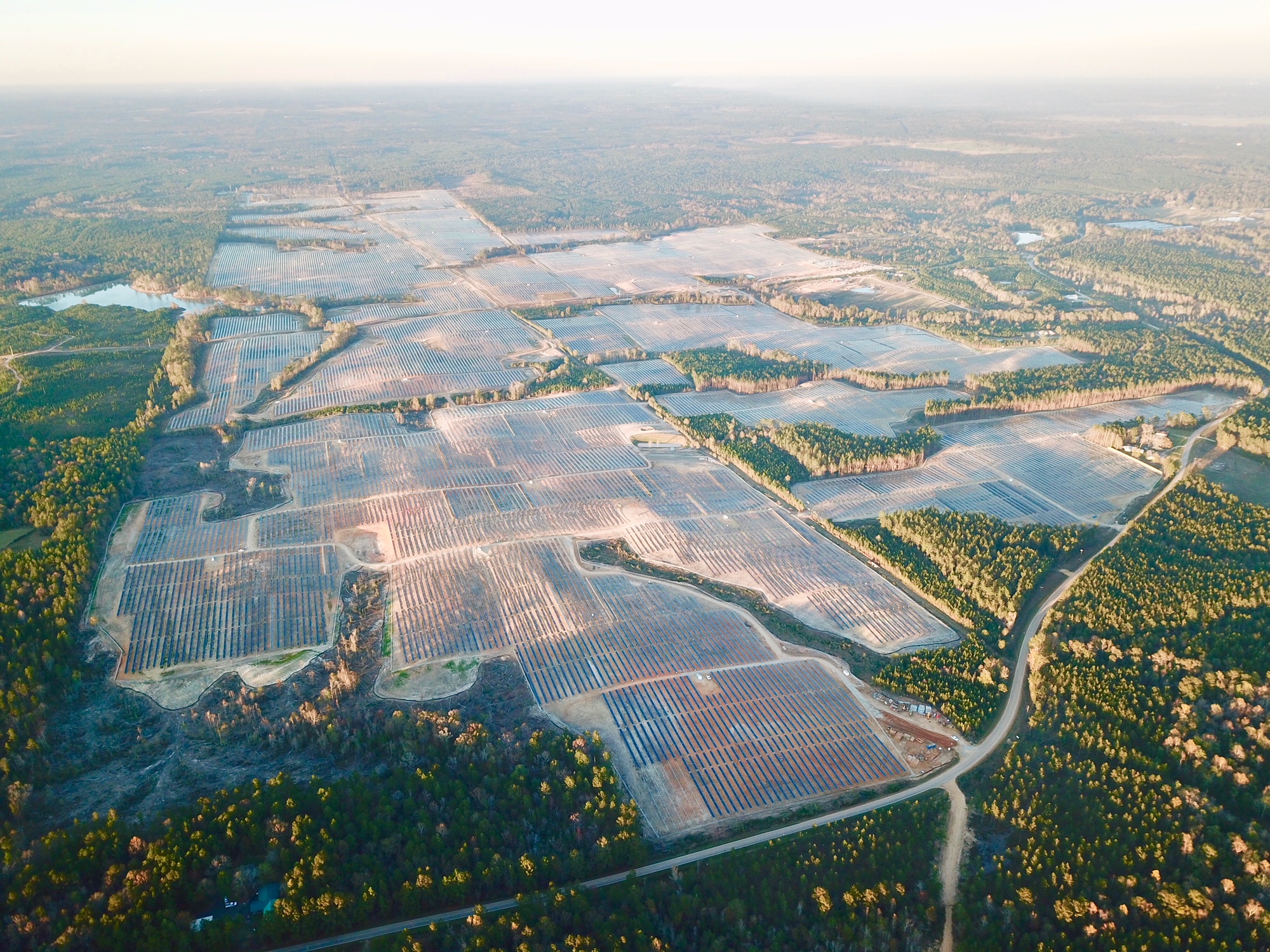 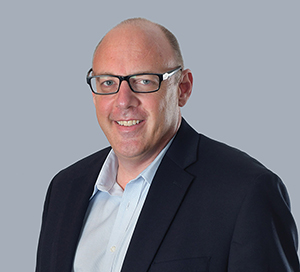 Chances are high that if you’ve been traveling around various regions of the United States in the past few years, you have noticed a solar array where one was not previously. I have had a similar “ah-ha” moment.

You may have been struck by the fact that there are vast solar developments in more rural areas — where site selection for solar installations is more favorable, land is cheaper and larger land tracts are available. You might be further surprised to see that solar farms are popping up in most regions of the country. It’s not just your region.

Given that solar farms place minimal material demands on municipal services, more rural areas make sense from a siting perspective. As you glance back at the solar array you just passed, you might ask yourself the same question I did in Hattiesburg, Mississippi: “Why is this solar farm here, and what is driving the huge increase in solar energy over the past few years?”

I would argue that the solar power industry is one of the largest economic impact successes in rural America over the past decades.

As Far as the Eye Can See

My “ah-ha” moment was essentially looking over my shoulder and observing a solar array 2.5 miles by one mile in size — with more than 500,000 solar panels on trackers. Yet the array is hardly visible from the road. For me what had been a glancing interest morphed into some more serious curiosity. 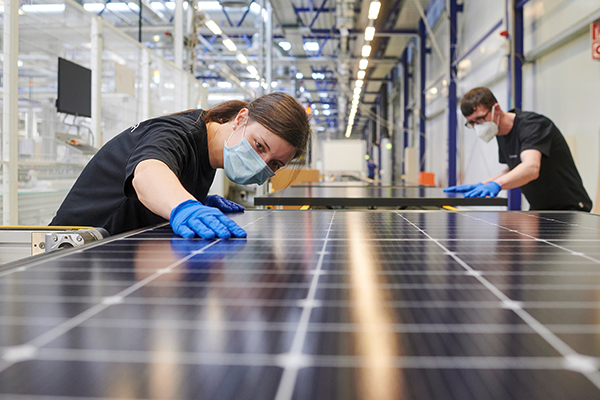 Solar can generate jobs in addition to megawatts. Germany’s Meyer Burger in January committed to a 400-MW manufacturing facility in Goodyear, Arizona, to make high-performance solar modules like these from the company’s German facilities.

I already had some familiarity with the solar industry, and took the opportunity to return to Hattiesburg and meet with Chad Newell, president of the Area Development Partnership, to discuss the how and whys of solar and Hattiesburg. Here is what I learned: The two large solar farms in Hattiesburg service the energy needs of Cooperative Energy and Mississippi Power — together they are generating more than 100 MW of clean renewable energy for Mississippi residents and employers.

This is a story that is being repeated across the Southeast as utilities seek to diversify their energy generation portfolios. These developments have made solar energy the most rapidly growing form of energy generation in the U.S. While the percentage of overall generation is small, the growth and technology advancement is impressive. According to the Solar Energy Industries Association:

Solar is likely to continue this path for some time. Among the key drivers that will support the industry going forward is the need for utilities to replace generation. The closure of coal plants continues, and that generation is being replaced by solar and natural gas at a rapid pace. Coal accounts for about 19% of energy generation, yet over 50% of carbon emissions from the sector. In the race to decarbonize, 80 coal plants with a total capacity of 98.3 GW are publicly scheduled for full retirement over the next three decades, according to the global coal plant tracker from Global Energy Monitor. 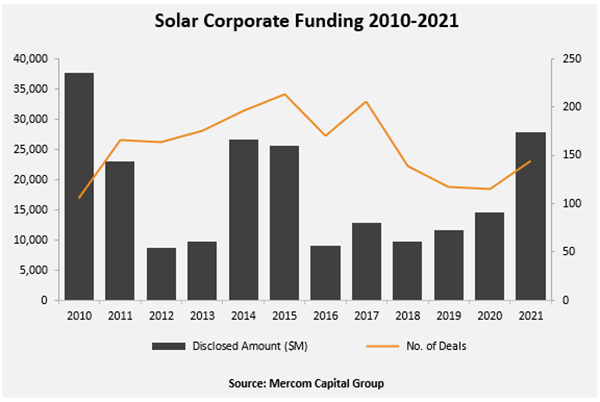 Utilities are becoming more adept at solar and at working with developers to accomplish renewable energy development. Solar projects are not simple or easy, but as markets evolve, developers secure sources of long-term financing. As techniques and strategies evolve, the industry will find its way and adapt to evolving market conditions.

One hot topic is the demand for direct solar procurement by companies themselves. This is an emerging and important issue. As companies with heavy loads (large industrial plants, data centers and the like) seek to secure renewable energy to fulfill their net-zero objectives, the solar industry along with partner utilities will need to respond in a manner that works for all parties.

For example, Mercedes-Benz USA and Alabama Power announced in December the opening of the 80-megawatt Letohatchee Solar Project in Lowndes County, Alabama. According to reports, “under the 15-year contract, MBUSI will receive all the renewable energy credits (RECs) from the facility, which will cover a significant portion of the electric needs for its Vance and Bibb County campuses. Alabama Power will receive the entire electric output from the project pursuant to a 15-year power purchase agreement.” 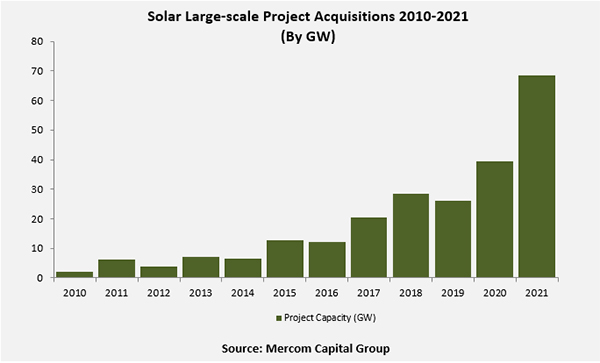 The demand for renewable energy will become an important topic for site selectors and economic development organizations as major employers will adjust to evolving energy strategies both in front of and behind the meter. A very high percentage of industrial load going forward will seek local economic development and utility responses in solving renewable energy procurement challenges as part of the site selection process.

The project in Hattiesburg is actually 150 MW in total and created over 300 construction jobs over the construction period. The capital investment for such a project is over $300 million, and according to Chad Newell, “Hattiesburg is punching above our weight class in terms of solar. There are other states like California, North Carolina, Arizona and Nevada, but if you look across the Southeast, Hattiesburg is one of the larger centers for solar, certainly No. 1 in Mississippi. Solar gives our community an edge and allows us to talk about all of what Hattiesburg has to offer and our acceptance and support for innovative industries.”

It’s that sort of potential that converted my curiosity into a career move back in 2018, when I came on board with Origis Energy as director of site procurement and real estate. Ever since, I’ve watched renewable power grow increasingly sustainable economically as well as environmentally.

The proposed federal Build Back Better legislation includes provisions for renewable energy, specifically money for grid modernization, as well as extensions of the investment tax credit. As this legislation moves forward, it should address a major issue in securing solar and other forms of renewable energy such as battery technology going forward: the long overdue modernization of the grid. The Build Back Better legislation, if it continues in its current form, will provide a boost to renewables such that solar may become even more omnipresent in a region near you.

But keep your eyes on the road.

Insights from ‘The 50 States of Solar’

The N.C. Clean Energy Technology Center’s 2021 Annual Review & Q4 2021 Edition of the 50 States of Solar found that 46 states and the District of Columbia took some type of distributed solar policy action during 2021, with the greatest number of actions relating to net metering policies, community solar policies, and residential fixed charge increases. “A total of 286 state and utility level distributed solar policy and rate changes were proposed, pending, or decided in 2021,” said the report. The states taking the greatest number of actions were Illinois, Maine, California, New York, Colorado, South Carolina, and Connecticut.

“With regulators in Connecticut, Kentucky, New York, and South Carolina adopting new DG compensation tariffs, 2021 was a very consequential year for distributed solar,” said Brian Lips, senior policy project manager at NCCETC. “But with major proposal under consideration in California, Hawaii, North Carolina, and other states, 2022 is shaping up to be even more eventful.” 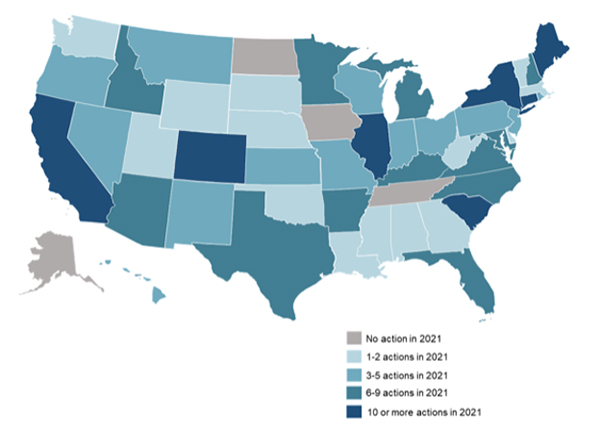 At a ceremony in Phoenix in January, officials with the Navajo Tribal Utility Authority, Salt River Project and the Navajo Nation extended an agreement that paved the way for the first large-scale utility solar farm on the Navajo Nation, the Kayenta I facility. The groups also signed a contract for a brand-new, 200-MW solar resource on the Navajo Nation called Cameron Solar that is set to be operational by the end of 2023, as the Nation — like the nation — transitions from a coal-dependent economy.