Perspectives from Europe on Business Resilience in Pandemic Times 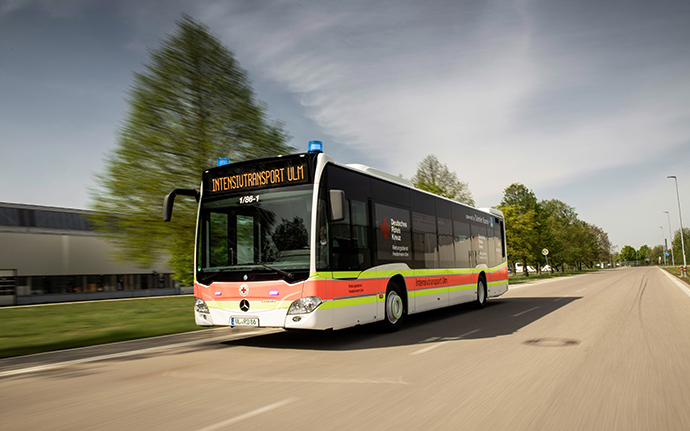 Among other innovations and adaptations by European industry, Daimler converted one of its Mercedes-Benz Citaro buses into the largest intensive care ambulance in Germany, used by DRK-Rettungsdienst Heidenheim-Ulm gGmbH (German Red Cross Emergency Medical Services Heidenheim-Ulm).

In addition to operating its own Conway Advisory division, Site Selection parent company Conway, Inc. is a shareholder in and major partner of PM & Partner Marketing Consulting GmbH (PM&P), an independent consulting and market research firm with offices in Frankfurt, Munich, Berlin and Chicago. The company has operated internationally since 1974 providing advisory services to corporations and to economic development organizations.

Today, like all consultancies and companies, it has pivoted.

“None of the regions we are operating in and that we are serving has been spared,” writes Michael Hass, PM&P’s CEO, “and every single one is adopting drastic measures to protect their people from the effects of the virus. Through our extensive international network, we at PM&P have the privilege to have access to firsthand information on the social and economic impact of these interventions.”

Even as they address protective measures, those communities and companies are demonstrating novel solutions to dealing with the novel coronavirus, and some companies are indeed finding themselves busier even as they look to reposition and recover.

“This slowdown will not be universal. Indeed, many companies are very likely to be looking for ways to rebuild resiliency into their supply and value chains,” says Chris Steele, vice president – Advisory at Conway. “Food production, healthcare, biotech and pharmaceuticals will all likely see new investments as the world makes investments to prepare for this kind of disruption in the future. Additionally, these investments are likely to be spread more across the globe (for market and talent access) rather than concentrated in any particular areas for cost reasons.”

Site Selection’s ongoing series of reports on COVID-19 (including an entire special edition of the magazine coming in July) has so far featured insights into our home state of Georgia, Asia’s supply chain dominance and what’s next for the United States. Here we present brief insights on Europe from our friends at PM&P. — Adam Bruns, Managing Editor, Site Selection

Germany: A Position of Strength

Although COVID-19 has a huge impact on the German society in general, compared to other European countries, Germany is not dealing with the same exceptional hardship. Worldwide, we have the lowest death and infection rate per inhabitants.

Chancellor Angela Merkel called the COVID-19 outbreak the “biggest challenge the Germans have to face since World War II.” The German mittelstand — the country’s family-owned companies and the backbone of the German economy — are suffering. Travel bans and a lack of personal communication led us to an economic crisis. However, to face the economic impact, the Bundesregierung and German parliament acted fast. On Wednesday, March 25, German Minister for Economic Affairs Peter Altmaier said the following during his speech in parliament:

“The German Bundestag today demonstrated again how quickly it can adopt important legislation when this is urgently needed. It is now important to secure the economic survival especially of own-account workers and microenterprises and to do everything we can to help our companies to cope with the crisis as well as possible. We need to safeguard the economic substance of our country. It is now important to act together - and quickly!

On that day, the German parliament passed a bill to support the German economy with an unprecedented amount of more than €750 Billion. Small and medium sized companies were able to apply for a cash flow subsidy up to €25.000 immediately. In addition to immediate assistance for small enterprises, there are comprehensive loan programs for companies to apply for from the German KFW Bank. The bank has financed enterprises in Germany since World War II with low interest rates, and is taking over a huge number of guarantees. In addition, the Kurzarbeit (short-term-labor) scheme, a wage subsidy, will help to stabilize the country’s labor market.

“Travel bans and a lack of personal communication led us to an economic crisis. However, to face the economic impact, the Bundesregierung and German parliament acted fast.”

Besides the containment of the pandemic itself, the vital question right now is how we can return to “normal” life, business, and how to reduce the economic damage resulting from the crisis. Our government at least says they will do everything to protect the economic structure and prevent the sale or break-up of important German companies. They already have proved their willingness by passing the bills mentioned. We have a strong, diverse, recession-proofed economy, skilled workforce, great infrastructure and now the support from the German government. The pandemic might affect private industry for a few months, but we hopefully will recover soon and use the strength that has made Germany Europe’s economic powerhouse. — Sebastian Hass, Partner, PM&P

The famous German research societies Max Planck Society, Fraunhofer Society and the Helmholtz association have researched together on the best path out of the crisis. Today, April 30, they published a scenario on how to cope with COVID-19. They propose to drain the virus with a continued lockdown. They see the chance to push back the virus to a level where simple tracing of infected persons could be sufficient while the normal life could go on. Currently 160,000 people in Germany are infected, of which 120,000 have already recovered and 6,000 died, which means there are only 34,000 active cases left. That is a number which could be brought close to zero, as long as more people recover each day than become newly infected. The strategy follows the vision that some further weeks of lockdown could avoid a second wave or more severe and long-lasting restrictions later this year. — Andreas Paulicks, Senior Partner

After Italy and Spain, among other European countries France has been strongly hit by the COVID-19 outbreak. The third highest death rate after Italy and Spain shows the dramatic situation. In some regions like the Alsace, hospitals have reached the maximum capacity and some patients were moved to hospitals in other regions in France and even to Germany or Switzerland.

French Minister of Economy and Finance Bruno Le Maire detailed a massive plan to help companies overcome the economic difficulties linked to the Coronavirus outbreak. The objective of these exceptional measures is to allow businesses encountering cash issues to postpone certain tax and social security payments and to prevent the growth of unemployment with extended partial operation measures. To support companies, French authorities have decided to mobilize €350 billion to support the economy, including:

The French National Assembly has just voted in favor of a containment plan beginning May 11 that includes measures to allow a gradual — but partial — return to normal, such as the opening of schools and shops and the facilitation of movement for personal and business trips.

Even if the French economy still faces some structural challenges — loss of competitiveness and market share, high public debt, too few mid-cap companies — France has a number of strong fundamentals and specific strengths:

Even if the impact of the COVID-19 outbreak on businesses could be massive in the very short term, these assets will be the basis of the recovery to come in an economic world in full reconversion. — Jerôme Ducuing, Business Development, France, PM&P

In terms of economic aid, the Spanish government has put in place a €200 billion plan in order to help companies and individuals. It is expected that additional supporting schemes will be introduced in order to facilitate the re-start of the economic activity and in order to avoid a massive increase in the unemployment rate. The economic support scheme will be based on seven pillars:

We believe that both Spain and Portugal have the capacity to overcome the existing economic situation and, during the second semester of 2020, both countries will be in the process of recovering from this dramatic pandemic situation. — Sergio Reyes, Partner - IAF Consulting

On FDI Attraction and Remote Work

Recently, the UN Conference on Trade and Development (UNCTAD) published a report stating that COVID-19 “could bring global foreign direct investment flows to their lowest levels since the 2008-2009 financial crisis.” The UN trade body predicts that FDI could decline by 5% to 15% worldwide. This will particularly affect the automotive, aerospace and energy sectors.

As a result, site selection and location marketing are likely to see increasing competition for investors in an already highly competitive market. Key success factors will be a concise positioning and strategically planned efforts based on e.g., analyses of existing clusters and supply chains.

“When talking to decision-makers during the last couple of weeks, we have experienced a very high level of openness to reconsider their companies’ existing supply chains and to explore strategic expansion plans.”

Currently, economic development organizations (EDOs) on national, regional and local levels are focusing on supporting companies to handle the situation and to avoid job losses. Attracting new investors becomes inevitably of secondary importance. Notwithstanding this challenging situation, EDOs must not lose sight of the significance of investment attraction to ensure the creation of new jobs and future prosperity.

When talking to decision-makers during the last couple of weeks, we have experienced a very high level of openness to reconsider their companies’ existing supply chains and to explore strategic expansion plans. The fact that most employees are working from home these days facilitates engagement with CEOs and other members of the management team, as they are less booked with meetings.

Although videoconferencing and e-networking platforms cannot replace personal interaction completely, they are well suited for an initial exchange. Prior to the corona outbreak, these tools have only been used selectively in some sectors and markets. Adaptation to the social distancing regulations resulted in the introduction of virtual communication to a much broader audience, and we are convinced that it will persist as an additional facet in the mainstream of global business life. — Jonas Winkler, Economic Development Specialist, PM&P

In addition to manufacturing surgical masks, carmaker SEAT has restarted production this week at its Martorell, Barcelona and Componentes plants, and is conducting COVID-19 tests on its 15,000 employees. “Now that the most difficult phase of COVID-19 has been overcome, we face the first stage of returning to normal without letting our guard down,” said SEAT President and Vice President for Finance and IT Carsten Isensee.
Video courtesy of SEAT