The Port of Mobile will build a new roll-on/roll-off facility at an ideal time for the growing automotive industry in the southeastern U.S. 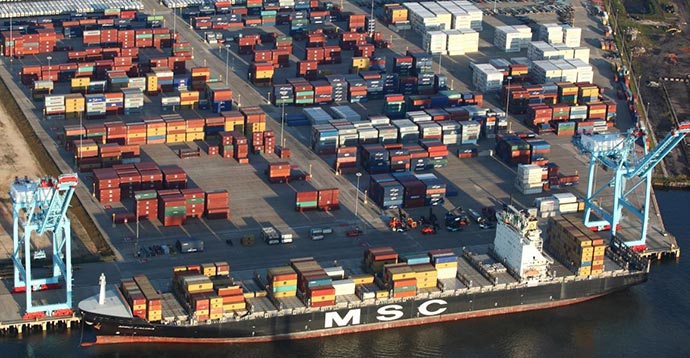 Alabama’s state port is currently the nation’s 10th largest seaport, with 58 million tons of cargo in 2016.
Photo courtesy of Alabama Department of Commerce
by SAVANNAH KING

Historically, vehicles come into or leave the United States via ports on the East Coast or West Coast. But the Gulf of Mexico is becoming an even more vital player in the import and exports related to automotive manufacturing.

Between 2010 and 2016, Gulf Coast import market shares grew from 5 to 7 percent and exports grew from 10 to 11 percent. Between those years, West Coast imports dropped from 57 percent down to 51 percent while the East Coast grew from 38 percent to 43 percent.

The trend is likely to continue as automotive manufacturing grows in the Southeast and Mexico. And ports along the Gulf of Mexico are stepping up to handle the slew of newly minted cars and trucks.

Earlier this year, Huntsville, Alabama, won the coveted $1.6-billion joint Toyota-Mazda assembly plant. The plant, which is located on a former 2,500-acre (1,012-hectare) cotton field about 14 miles (22 km.) away from Toyota's engine plant, will open in 2021 and is expected to produce some 300,000 vehicles a year. Toyota also manufactures its popular Corolla model at its Blue Springs, Mississippi, facility. Toyota has announced it will invest $170 million in a complete replacement of the facility's production lines at that facility, which will allow the plant to respond more quickly to changing market demands through a.

In March, The Alabama State Port Authority was awarded a $12.7-million Transportation Investment Generating Economic Recovery grant (TIGER grants are discretionary funding for road, transit, maritime and rail projects) by the Department of Transportation to convert an abandoned bulk handling facility at the Port of Mobile into a new mobile vehicle processing facility. The new roll on/roll off (RO/RO) facility will help diversify the port's cargo base, which primarily exports forest products (the Port of Mobile is one of the largest ports for forestry products), steel and commodities such as Coca-Cola.

"Advancing the Port of Mobile is critical to driving economic success in our state," said U.S. Senator Richard Shelby. "We have one of the fastest growing harbors in the nation. This grant will help facilitate the demands of Alabama's booming automotive industry. I am encouraged by the current growth opportunities directly tied to the harbor and will continue working to make the Port of Mobile one of the most competitive harbors in the country."

A month later, in April, the Alabama State Port Authority and AutoMobile International Terminal — a joint venture of Terminal Zárate S.A. and SAAM Puertos S.A. — met in Buenos Aires, Argentina to sign a memorandum of understanding to develop and operate the terminal. In addition to the TIGER grant, a $28.8-million grant from the Alabama Gulf Coast Recovery Council as authorized under the Resources and Ecosystems Sustainability, Tourism Opportunities and Revived Economy of the Gulf Coast Act of 2011 would contribute toward the cost of the project.

The new $60-million, 57-acre (23-hectare) facility will be able to handle cars, trucks, military vehicles and other heavy cargos. A 40-ft. ship draft facility will be served by five Class I railroads that serve all of North America, and access to interstates I-65 and I-10. Construction is expected to begin by the end of the year with an anticipated completion at the end of 2019. The project is expected to reduce shipping costs to several automotive manufacturing plants in the region.

"There are a number of ports that already have these facilities," says Alabama State Port Authority Director Jimmy Lyons. "The two biggest in the Southeast are in Brunswick, Georgia, and Jacksonville, Florida. Charleston, South Carolina does some, primarily with BMW." But for other OEMs like the ones in Alabama and Mississippi and even the Kia plant in Georgia, he says, "We are the closest port, and this will give them an additional option for exporting vehicles, whether it's worldwide or going down to Mexico."

Roll-on/roll-off statistics are hard to come by from federal sources. The American Association of Port Authorities surveys its members about various shipping stats every year, but doesn't normally make the RO/RO figures public. AAPA Public Affairs Director Aaron Ellis, however, was able to dig up the numbers for us:

Early reports of 2017 numbers show substantial upticks at many of the reporting ports, led by Jacksonville surging over 693,000. Meanwhile, a peek at the Mexican port members of AAPA shows even greater leaps up, including the Port of Veracruz rising from 770,729 to 1,032,692 and the Port of Lazaro Cardenas shooting from 311,744 to 442,869.

The capacity of the new terminal in Mobile will be 160,000 imported or exported vehicles per year. By comparison, Georgia's Port of Brunswick has an annual capacity of 800,000, and is aiming for 1.4 million. In the last two years, ports in Houston, Galveston and Freeport, Texas, also have added RO/RO capacity or shipping services for automakers. 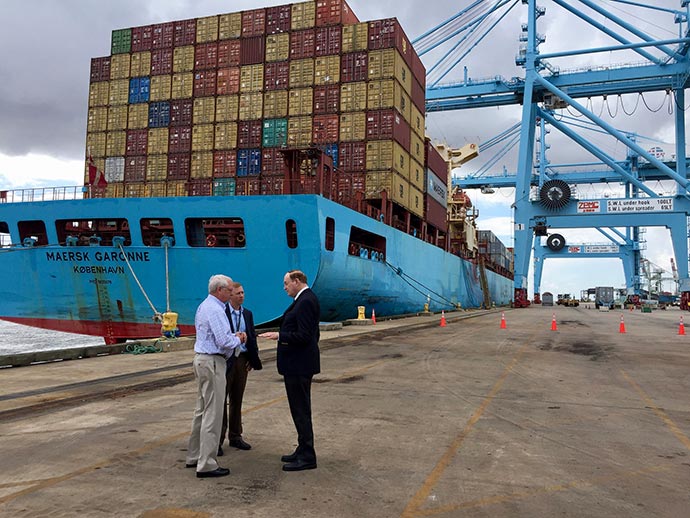 U.S. Senator Richard Shelby, shown here during a visit to the Port of Mobile last year, in March announced a $12.7-million TIGER grant that will help fund a new roll-on/roll-off terminal at the port.
Photo courtesy of Sen. Shelby’s office