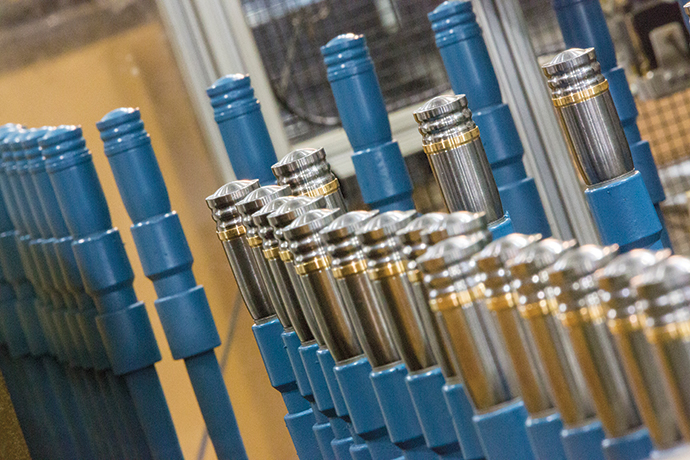 Considered one of the best-kept secrets in the defense industry, the U.S. Navy’s Allegany Ballistics Laboratory (ABL) has a storied past and what appears to be a bright future. The 1,600-acre (650-hectare) installation tucked away in northern West Virginia is the site of the Mountain State’s largest current industrial investment, a $100 million rocket motor project by the facility’s overseer, Northrop Grumman.

The campus in northern West Virginia dates to World War II, when the former Kelly-Springfield Tire Company erected a plant to make artillery shells for the Army. Taken over by the Navy after the war and since leased to a series of private operators, the facility over the years has churned out a vast array of weaponry that has included bazookas, solid rocket propellant, rocket casings, submarine-launched rocket motors, proximity sensors for rocket shells and all manner of ordnance.

Having grown to comprise more than 300 buildings, ABL is practically a city unto itself. In addition to Northrop Grumman, companies including Raytheon, Lockheed Martin and IBM have operations there, alongside occupants and programs considered top secret.

“ABL, in my opinion, is one of the most diverse plants in the U.S. industrial base,” says Northrop Grumman Vice President of Missile Products Pat Nolan,. “We’ve taken a World War II vintage plant and turned it into a state-of-the-art facility that has more than 100 active programs.”

Nolan tells Site Selection that Northrop Grumman makes products at the plant as small as bullets for a 25-millimeter cannon and fuses for 2,000-pound bombs, all the way up to the motors it has begun to build for air-to-air missiles, air-to-ground missiles and ground-to-ground missiles.

A Boon for the Community

Surrounding Mineral County absorbed the loss of more than 200 jobs in the spring of 2019, when a Versa paper plant just across the Maryland border shut down. The county put up $5 million to build the 50,000-sq.-ft. (4,645-sq.-m) structure where Northrop Grumman is making the new rocket motors. In return, Northrop Grumman has pledged to hire 500 people over the next five years. Head count at ABL is about 1,400 employees, says Nolan, which makes it the biggest employer in the county and the third-largest manufacturing employer in West Virginia.

“We have guards, we have firefighters, chemical engineers, mechanical engineers, civil engineers and electrical engineers. We have pipe fitters and welders and all kinds of business functions, including lawyers,” Nolan says.

“ABL, in my opinion, is one of the most diverse plants in the U.S. industrial base.”
— Pat Nolan, Vice President, Missile Products, Northrop Grumman

“It brings in a lot of well-educated, high-tech people from outside the area,” Howell tells Site Selection. “They lend a lot to our community.”

In April, after years of litigation, West Virginia became a right to work state, thus making it more attractive to outside investors. That development follows years of sustained effort to implement tort and judicial reforms as well as statutes governing workers’ compensation. Under the state’s PILOT incentive, businesses are saving millions of dollars in property taxes by selling their land to the state and leasing it back.

“The political winds have changed dramatically in West Virginia,” Howell says. “Our policies have become a lot more business friendly. We’re talking to companies now about coming to the state that would never have considered us before.”

A huge win could be in the offing. In February, a team from Richard Branson’s Virgin Hyperloop One visited West Virginia as part of site selection for a sprawling development center for its high-speed transportation system. Kristen Hammer, business development manager for Hyperloop One, told local media that the project could create a staggering 5,000 jobs. An official who prefers not to be identified tells Site Selection that West Virginia is one of only two states still being considered for the six-mile (10-km.) test track.

Gov. Jim Justice said the prospect of landing such a prize is “unbelievable” for West Virginia.

“It changes our image,” Justice said. “It makes us more popular in every way.”