The Next Markets to Embrace the Life Sciences Expansion 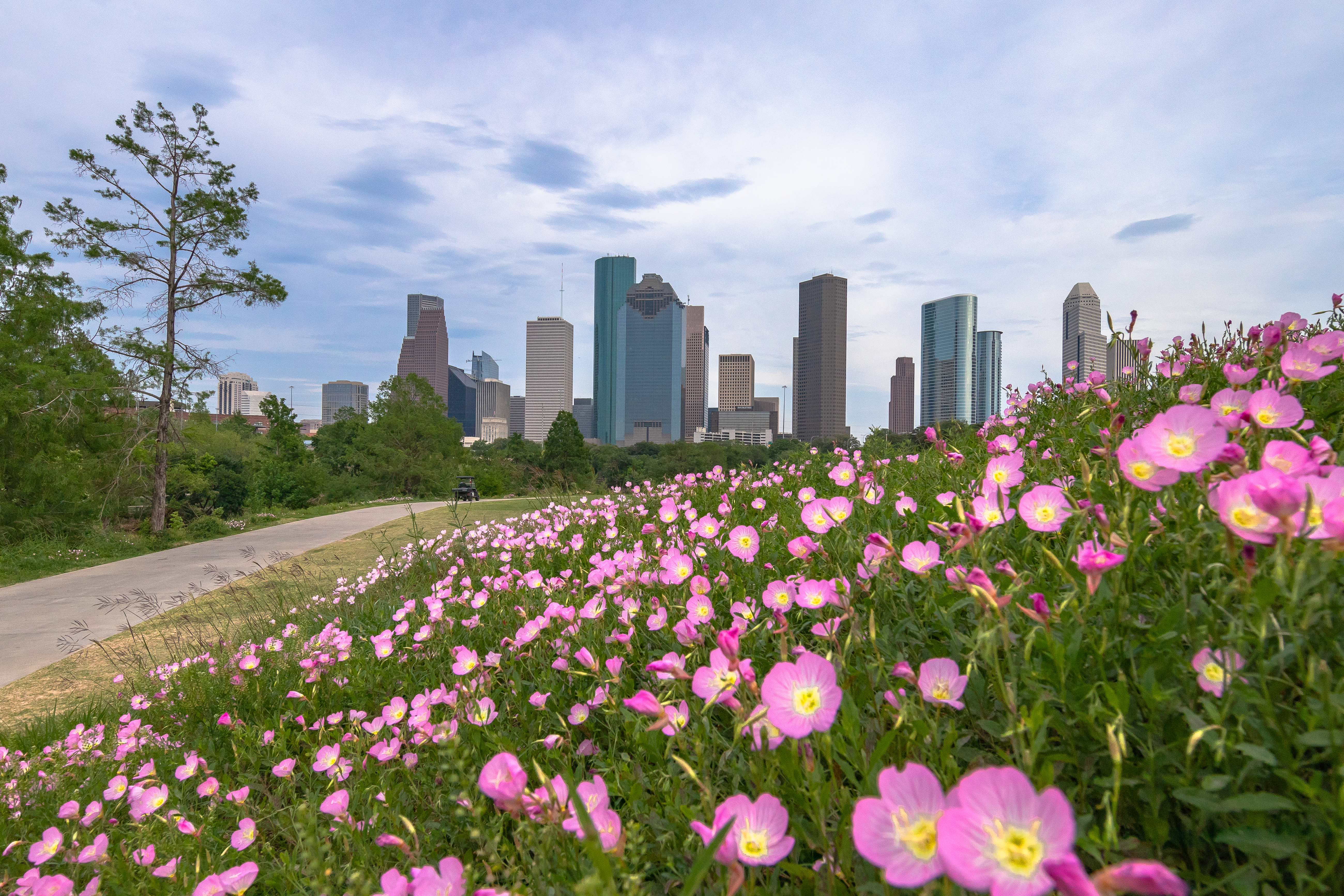 Houston is among the rising next wave of life sciences hot spots, according to the latest CBRE analysis.
Photo by Jaime Hudson courtesy of Travel Texas
By Ian Anderson
S

ure, you’re well aware of Boston and San Francisco as hotbeds of life sciences talent. But what about Sacramento? Maybe Pittsburgh?

No kidding, the industry has expanded dramatically beyond its traditional strongholds in recent years. Strong research and education networks, heightened funding and companies’ voracious search for talent have resulted in expanding pools of life sciences labor in dozens of U.S. markets.

As of mid-2022, various indicators suggested growth prospects for the next phase of the life sciences industry’s expansion were strong, despite a pullback in industry funding over the last year. As a result, over the next several years, more metropolitan areas will see activity in life sciences job growth and lab construction.

Based upon CBRE’s 2022 Life Sciences Talent report, many metros appear well positioned, including larger metros like Atlanta and Houston, and smaller hubs, like Salt Lake City and Nashville. There’s also the likelihood that a spillover effect from the leading clusters of Boston-Cambridge and the San Francisco Bay Area will extend to surrounding markets such as Worcester, Massachusetts; New Haven, Connecticut; and Sacramento.

In June 2022, employment in the U.S. biotechnology industry grew at its fastest rate ever: 14.5% year-over-year. The broader life sciences industry, including pharmaceutical manufacturers and testing and diagnostic laboratories, also grew at its fastest in rate in over 20 years, disregarding the sharp bounce back in 2021 from 2020’s deceleration.

Though job growth may soften in the near-term, based upon macroeconomic conditions and a pullback in industry funding over the last year, research and development expenditures within the life sciences industry are on target to be as high as they have been in years. NIH funding for 2023 is projected to surge to its highest level ever.

The industry’s ongoing expansion will benefit some metros more than others. Figure 1, for example, shows the link between NIH funding and employment of life sciences researchers in CBRE’s top-25 ranked markets for life sciences talent, providing clues to which markets might be the next to have a growth spurt.

Next up are those markets in a purple font on Figure 1, on deck and just to the lower left of the previously mentioned established markets. These less established, rising markets include some of the nation’s largest metropolitan areas, offering sizeable pools of life sciences researchers as well as notable research and healthcare institutions receiving significant dollars from the NIH (Houston, Atlanta, Dallas-Fort Worth, Miami-Fort Lauderdale, and Minneapolis-St Paul).

Also included in this group are some smaller metro areas that offer significant densities of talent reflecting healthy, closely knit life sciences and healthcare ecosystems or other ideal talent attributes supportive of growing life sciences clusters. Those include Nashville, Salt Lake City, Pittsburgh, Portland (Oregon) and Austin. Any of these markets could become one of the next leading life sciences clusters in the U.S.. 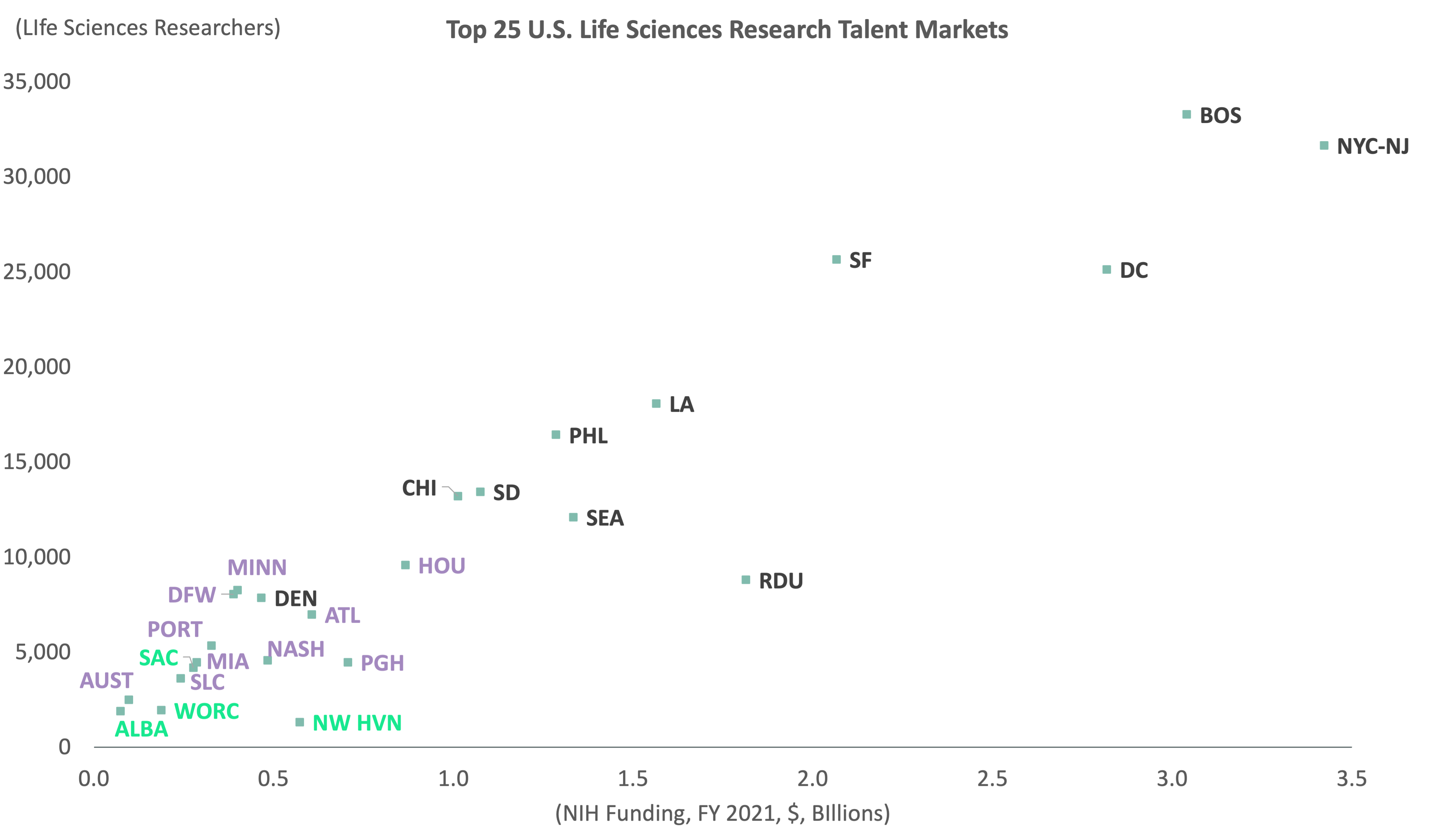 Beyond that are the satellite markets. Those include several tertiary markets with notable geographic proximity to the nation’s two leading life sciences clusters — Boston-Cambridge and the San Francisco Bay Area — that are positioned to benefit as spillover markets. The metros of Sacramento, Worcester, New Haven, and Albany (also benefiting from close proximity to New York City) all have attractively high densities of life sciences researchers as well as  key universities and healthcare institutions supporting their ecosystems.

Ultimately, the surprising influence of life sciences research in these relatively smaller markets reflects the reality of the much larger ecosystems nearby. In the Boston-Cambridge orbit, this ecosystem stretches to New York, encompassing Providence and New Haven, west to Worcester, Springfield, and Albany and north to Hanover, New Hampshire. Similarly, San Francisco‘s spillover effect extends to Sacramento in the north, supported by UC Davis, and south to Santa Cruz, supported by UC Santa Cruz. The linkages and life sciences activity between these relatively smaller markets and their more established, noteworthy neighbors will likely intensify over the next several years.

In conclusion, our research shows a number of markets are positioned to benefit disproportionately in the life sciences expansion. Those notably include large metros in the Sun Belt with an abundance of talent, as well as other emerging markets such as Pittsburgh, Minneapolis-St Paul, and Salt Lake City. Meanwhile, strongholds like Boston and San Francisco will remain cornerstones of the life sciences industry and their orbits of influence will grow. 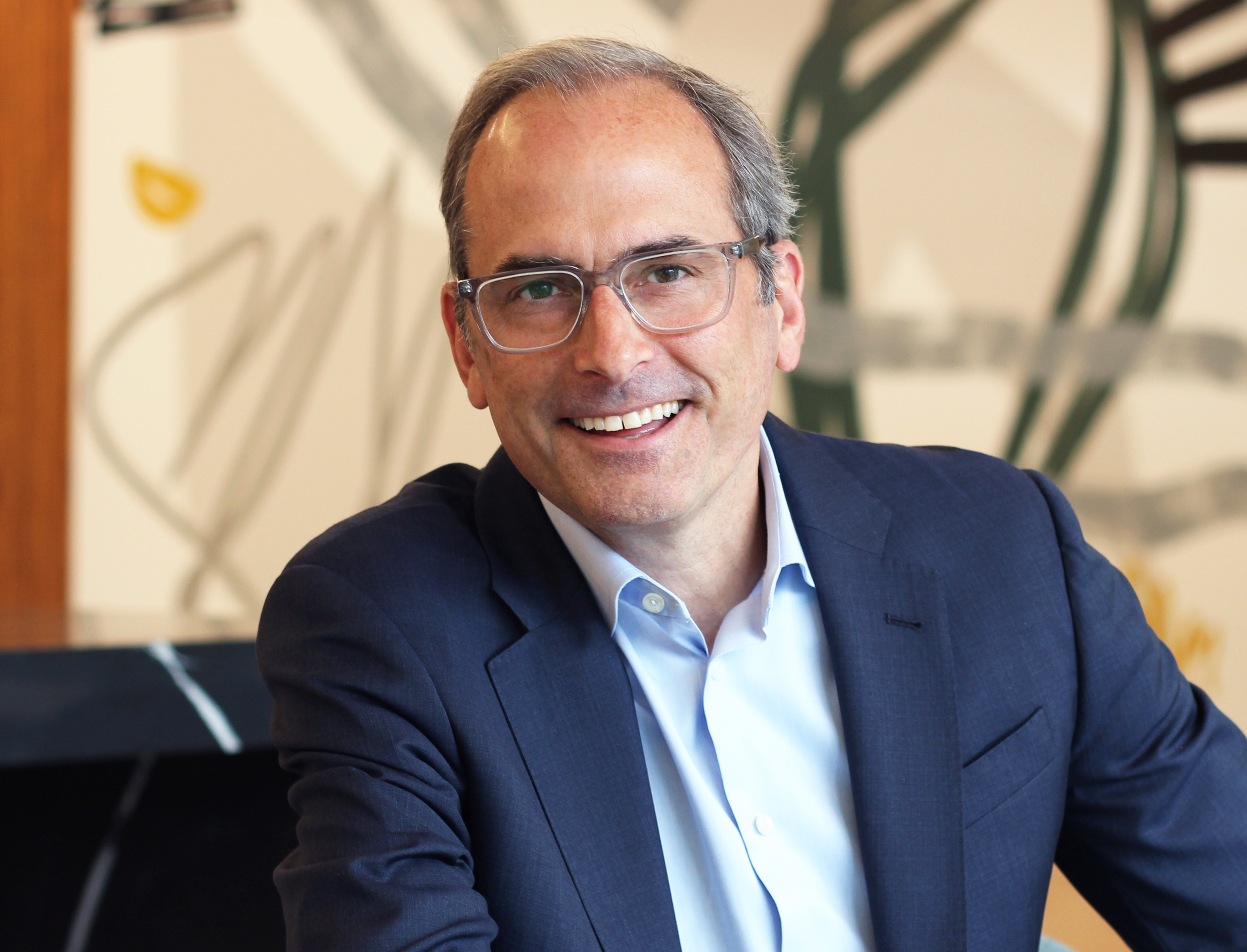 Ian Anderson is a Senior Director leading research about the life sciences industry for CBRE, the global commercial real estate services company. He is based in Philadelphia.