What America Can Learn from Lynchburg, Virginia

This south-central Virginia city did not set out to become a model for regional rebirth, but things changed. 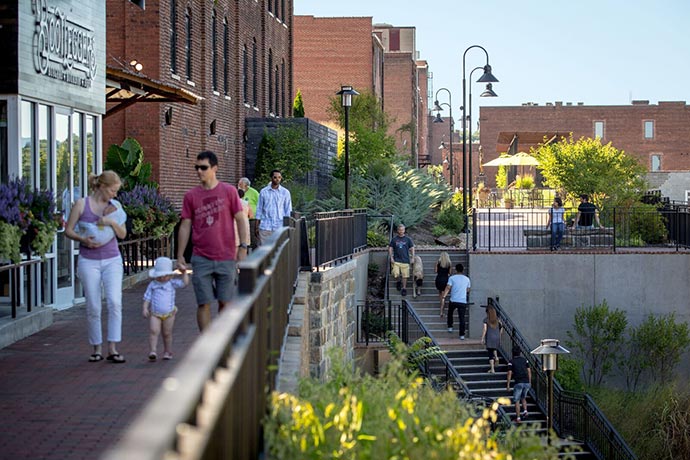 Lynchburg is known as the Hill City because it was built on seven hills.
Courtesy of Lynchburg Regional Business Alliance
by RON STARNER 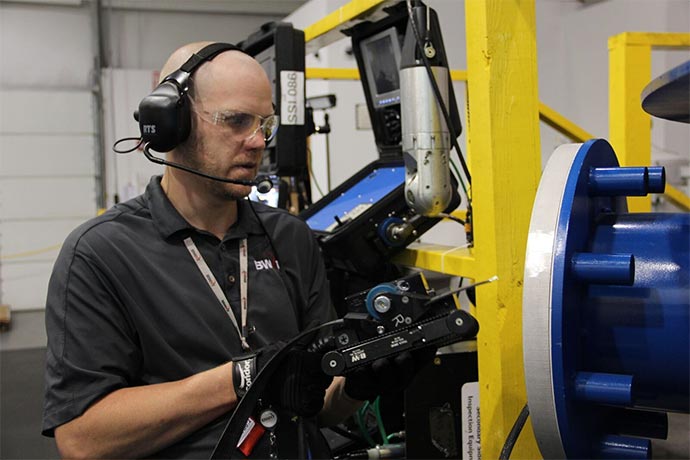 BWXT has a market capitalization of $6.8 billion and employs more than 2,500 workers in nuclear technology in the Lynchburg Region.
Courtesy of LRBA

Sometimes, it is rocket science.

Five minutes into my conversation with Jonathan Cirtain of BWXT, I realized we weren't on Earth anymore.

The subject had turned to Mars, and the BWXT vice president of advanced technologies was explaining the physics of a nuclear energy-powered journey to the Red Planet.

The fact this discussion took place in Lynchburg, Virginia, was not by accident. BWXT, a $6.8-billion company that uses nuclear technology to solve on- and off-earth problems, has been based in Lynchburg since it was spun out of Babcock & Wilcox in July 2015, but the true origins of the firm date back to 1867.

Today, BWXT is one of several high-tech manufacturing firms clustered in the greater Lynchburg region and the main reason why Lynchburg is considered one of the two most important nuclear cities in the United States.

If beleaguered factory towns are looking for a model city to follow in making a turnaround, they could do a lot worse than Lynchburg, the anchor community of a metropolitan area of 260,000 people in the foothills of the Blue Ridge Mountains.

If you're familiar with Lynchburg, it's probably because you've heard of Liberty University, the largest evangelical Christian university in America. But you likely don't know that Lynchburg had a history in advanced manufacturing long before the late Jerry Falwell Sr. founded LU in 1971.

Even though I graduated from LU in 1986, I never had a front-row seat to Lynchburg's economic revival. Megan Lucas, CEO and chief economic development officer for the Lynchburg Regional Business Alliance, changed that when she invited me to participate in a two-day media tour of the region that served as the private retreat for Thomas Jefferson.

What I learned were valuable lessons that could help any rusted-out community in need of an economic renaissance.

Taking a Ride to Mars

First and foremost, I learned that Lynchburg had hitched its wagon to the fortunes of the rapidly growing nuclear technology sector. Rex Geveden, president and CEO of BWXT, calls Lynchburg one of the two most important nuclear cities in the country. "Only Pittsburgh has more people working in this sector," he says. The Lynchburg Region employs nearly 4,000 people in the nuclear field, with 2,550 of them working for BWXT.

"This area is blooming literally and figuratively," says Geveden. "I came from the Toronto area, and I love being able to walk this city. The work we do is very labor intensive, and there is a lot of craft labor in this market. We're able to recruit talent from Virginia Tech, the University of Virginia, Liberty University and other schools in this region. There is a vibe of creativity at our company now, and it's due to the people who live and work in Lynchburg."

“There is no such thing as standing still. Higher education is getting more competitive all the time. Most colleges and universities don’t adapt quickly; we do. We operate more like a business.”
– Jerry Falwell Jr., President, Liberty University

The company made big news on April 15 when it announced plans to acquire a medical isotopes business from a Canadian health company. Pending regulatory approvals in the U.S. and Canada, BWXT will by the end of 2018 complete its buyout of Nordion's medical isotopes operation. Nordion, headquartered in Ottawa, is a branch of Ohio-based Sotera Health.

BWXT also continues to supply needed support for the manned mission to Mars. Cirtain says the nuclear energy propulsion system being designed by BWXT will enable a rocket carrying astronauts to reach Mars in 80 days.

"We'll spend $200 million in our capital budget this year," says Geveden. "About $40 million of that will be spent right here in Lynchburg. We're adding new employees every year, and the local community and technical colleges tailor training programs to meet our needs. Plus, the cost of living is very good here."

Another nuclear tech company, Framatome, has invested about $34 million in capital assets in the past five years into its Lynchburg area operations. Of its 2,300 North American workers, about 1,300 are based in the Lynchburg area. 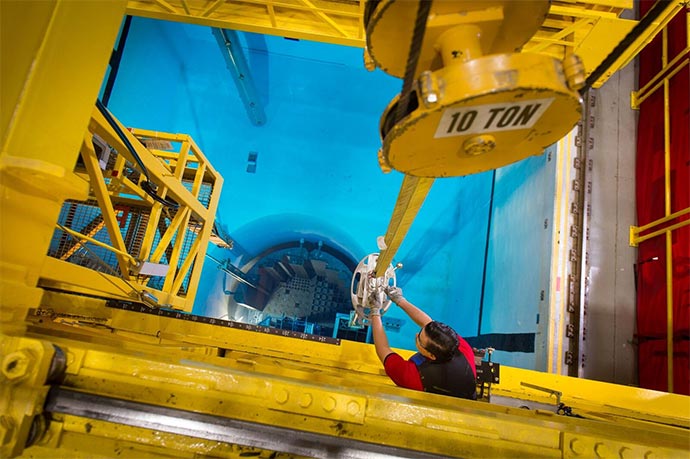 Framatome announced in April that it would relocate its corporate headquarters from Charlotte to Lynchburg. A nuclear technology firm, it employs 1,300 people in the Lynchburg Region.
Courtesy of LRBA

On April 4, Framatome announced that it would relocate its corporate headquarters from Charlotte, North Carolina, to Lynchburg. Formerly known as AREVA NP, the firm is a designer and supplier of nuclear steam supply systems and nuclear equipment, services and fuel. Framatome employs 14,000 workers worldwide.

"We have been in the Lynchburg area of Virginia for more than 50 years, and as we look to the future as Framatome, we are proud to once again make this the headquarters for our North American operations," said Gary Mignogna, president and CEO of Framatome Inc. "When it comes to recruiting, we have access to some of the best university programs in the country, and the region offers a growing diversity of activities and opportunities that make this a great place to live and work."

The second most important lesson I learned is that Lynchburg has transformed from a company town into an entrepreneurial one. Everywhere I visited in the region, I saw signs of innovation — from Madison Heights firm S&S Machine Inc., which makes archery equipment for world and Olympic champions, to Bedford County firm Simplimatic Automation, which assembles the robots and automated conveyor systems used in pharmaceutical factories around the world.

One of the chief purveyors of that entrepreneurial mindset is Carroll Moon, chief technology officer of CloudFit Software. "I was an 18-year Microsoft guy," he says. "I built and ran global operations for Office 365. I decided that the right thing to do was to help enterprise customers integrate the cloud with their IT portfolios. I revamped a service management consulting practice at Microsoft. That led us to start CloudFit – a managed scenario business."

A Lynchburg native, Moon moved away to pursue his career with Microsoft in Charlotte and Seattle. But he always felt the pull to return home. "In November 2006, I moved back to the Altavista area. I just love this area. It is home," he says. "When we had the opportunity to start CloudFit, it came down to what it would take for me to leave Microsoft. I needed to be able to pay my bills, and I wanted our presence to be in Lynchburg and help the region."

The talent in Lynchburg sealed the deal for Moon. "The people I want to work with are here," he says. "I call it blue-collar brilliance. They have a tremendous work ethic. Those who do move away want to come back home. There is something about this area that calls people home." 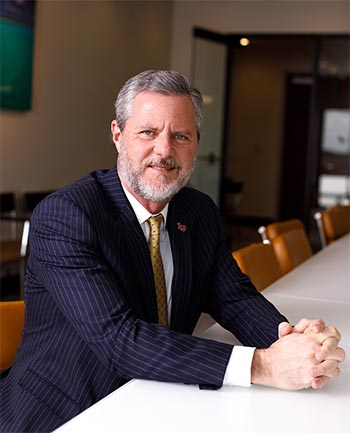 Jerry Falwell Jr., president of Liberty University, has led the school to a record enrollment of 15,000-plus residential students and $1 billion in construction activity over the last 10 years.
Courtesy of LU

With assistance from the state of Virginia, the city of Lynchburg and the Lynchburg Regional Business Alliance, CloudFit is off and running, Moon says. "They mobilized and worked with the state to help us find space and get started here," he says. "We know we're growing fast, and leasing space from the LRBA was a win-win. It helped us and it helped them. Being here is attractive to people. This is a great family atmosphere. It's not just the talent — it's the culture. We want to hire people who are giving back to society, and that's exactly what we're finding in Lynchburg. These folks would have been hired in an instant in Seattle."

CloudFit is on a trajectory to land in its own downtown building by March of 2020, Moon adds. "We're starting to meet with developers, and we like the fact that many other technology entrepreneurs are in this region. There is a culture of entrepreneurship here, with firms like 434 Marketing and Selective Wealth Management. And Liberty University is promoting it with Alex Barker and the new Center for Entrepreneurship."

The bottom line, says Moon, is that "in Lynchburg, you will find people who are very smart and who will work very hard. They will go outwork everyone else."

'No Such Thing as Standing Still'

Jerry Falwell Jr., president of LU, shares that view. "This is a dynamic city and a great place to live," he says. "Many of our students are choosing to stay and live here after they graduate."

With a resident enrollment of more than 15,000 students, Liberty casts a wide shadow from its perch on Candlers Mountain. And its influence on the region is growing.

"There is no such thing as standing still," Falwell says. "Higher education is getting more competitive all the time. Most colleges and universities don't adapt quickly. We do. We operate more like a business."

Only one college in America — Carnegie Mellon University in Pittsburgh — saw its endowment grow at a faster percentage rate than Liberty's $1.6-billion endowment last year. And Liberty, with 7,500 acres, is expanding its real estate footprint too. 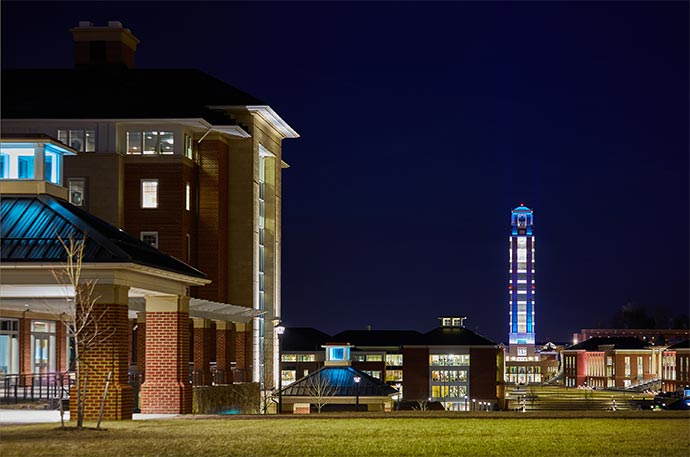 The 275-foot-tall Freedom Tower opened last year on the campus of Liberty University.
Courtesy of LU

LU has spent $1 billion on new facilities over the last 10 years and shows no signs of slowing. After opening the 275-foot-tall Freedom Tower and a new Olympic-sized swimming pool and indoor track in the past year, Liberty plans to start building a new 4,500-seat, 125,000-sq.-ft. indoor sports arena on campus soon.

Meanwhile, work continues on a $40-million expansion of Williams Stadium, part of Liberty's transition to the Football Bowl Subdivision. All other sports will transition from the Big South Conference to the Atlantic Sun Conference, effective with the 2018-2019 school year.

Companies are taking note of the progress. "Dozens of Fortune 500 firms come here to recruit our students," says Jonathan Whitt, vice president of special projects and business engagement for LU. "Apple and Microsoft love our students."

Falwell says he hears the same from area employers. "Companies here want to hire our students. Their work ethic and behavior make them great employees and great tenants," he says. "And the education they receive is of the highest quality."

Even if it's not all rocket science. 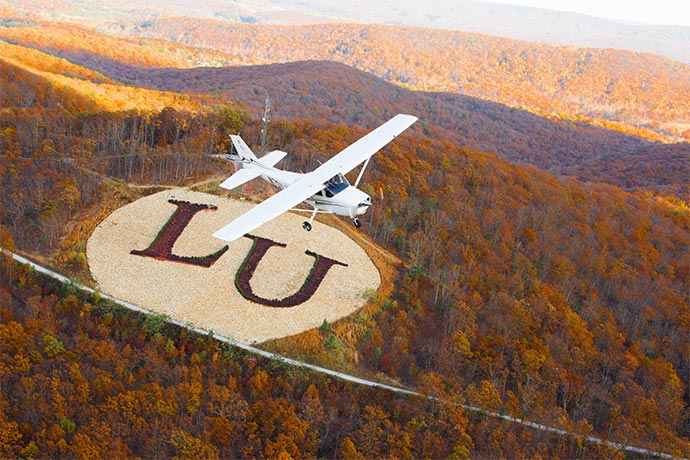 An airplane flies above the LU logo on Liberty Mountain. LU recently acquired the New London Airport and plans to expand its aeronautics school there.
Courtesy of LU