Write the Check, Get a Green Card


by ADAM BRUNS
adam.bruns bounce@conway.com
T
hat's what the U.S. Citizenship and Immigrations Services' Immigrant Investor Pilot Program, known as EB-5, did for 779 foreign individuals and their 2,227 dependents in the most recently concluded fiscal year. All told, these investors poured some $428 million into U.S. projects projected to create more than 7,700 direct and indirect jobs. But the program has room for three times that many visas – which means the potential of up to $2 billion in investments.
At a time when foreign corporate money has its eyes on U.S. investment like never before, economic developers, immigration experts and international entrepreneurs yearning for U.S. citizenship are all climbing up the EB-5 learning curve. Even though the program is set to sunset in November 2008, there is little doubt it will be renewed, given renewal of interest in the program and resolution of some past legal difficulties involving legitimate investment oversight.
The level of interest is strongest in the Republic of Korea and China, where the People's Bank of China is encouraging individual citizens as well as companies to invest abroad, in part to curb inflation. Korea, in turn, has relaxed its own rules regarding capital transfers out of the country. All of which means that all those trade missions to Asia might very well be focused on high-net-worth individuals as much as highly capitalized companies.
Open to Opportunity
The EB-5 program works primarily via the establishment of "regional centers," of which there are 17 across the country. Business sectors range from cargo warehouses in Washington to just about anything in New Orleans. Investments within these geographies that also fall within what are termed "targeted employment areas" (TEAs) need to be at least $500,000. Those outside the TEAs need to be at least $1 million and create 10 direct jobs. The regional center designation allows the additional variation of creating at least 10 direct or indirect jobs per investor. Projects run the gamut from hotels to heifer farms, with some falling into the industrial and manufacturing sector.
That's the case with the regional center administered by CANAM and the Philadelphia Industrial Development Corp., whose projects have included two facility expansions by Agusta Aerospace that have created 360 jobs. The most recent project by the company included a $15-million portion from the EB-5 program, which meant 30 individuals invested in that project. 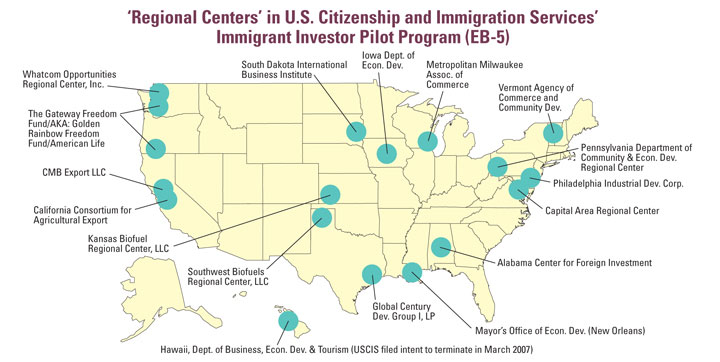 
Site Selection Online – The magazine of Corporate Real Estate Strategy and Area Economic Development.
©2008 Conway Data, Inc. All rights reserved. SiteNet data is from many sources and not warranted to be accurate or current.