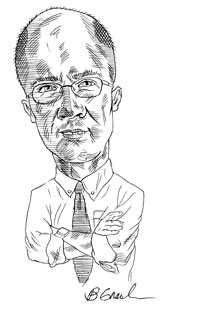 Illustration by Bob Gravlee
by MARK AREND
mark.arend bounce@conway.com
The Little Province
That Could


S
eldom does news of an area's proposed budget make it into my file of possible "Editor's View" topics. But over the past several weeks, one such item did just that. There it sat, since St. Patrick's Day, growing increasingly out of place with the other items I added to the file: The one about how a consortium of U.S. business interests, including the National Association of Manufacturers (NAM), the U.S. Chamber of Commerce and others are working to block an Administration effort to raise taxes on overseas profits – the consortium named itself "Protect America's Competitive Edge"; the one about how NAM is petitioning the U.S. Supreme Court to reaffirm earlier rulings that a company must have a physical presence in a state to be subject to its corporate income and franchise taxes (Massachusetts, you see, wants to tax the income of any business with customers in the state even if that business has no real property, employees or contacts there); or the one about how Illinois wanted in late March to increase income taxes 50 percent to close a budget deficit (cutting spending didn't seem to be an option), a move that didn't sit well with the state's largest manufacturing association. And there is any number of items on how damaging progressive taxation is in a volatile economy (think California's current situation to name just one).
In this milieu sat a news release from the provincial government of New Brunswick, dated March 17th, outlining its five-part 2009-10 budget. Sure, there's new spending on infrastructure, health care and education. But the budget also calls for a reduction in personal and corporate income tax rates. On the business side, the bottom line is a reduction in the corporate rate from 13 percent in 2008 to 8 percent in 2012, which surpasses the federal government's target of 10 percent by that year. Small businesses will benefit from a rise in the small business limit to $500,000 from $400,000. New, enhanced tax credits for small business investors and venture capitalists will result in improved access to capital, and still other tax credits are tied to energy use. Interestingly, the budget eliminates 700 public-sector jobs as a spending-control measure, which simply would not compute nowadays in state and national bureaucracies on the U.S. side of the border.
Canada's Financial Post predicted in its March 19th issue, "These moves will make New Brunswick one of the most tax-competitive jurisdictions in Canada," and praised – "Bravo" even – Premier Shawn Graham's government for choosing "to make personal and corporate tax reduction a pillar of its economic stimulus plan amidst the current global downturn."
Montréal-based Laurentian Bank Securities analysts, in a report reacting to the budget, predicted New Brunswick's recession would be "one of the mildest among provinces." What's more, "The New Brunswick government appears to be relatively more proactive compared to other jurisdictions, taking bolder steps to improve its economic and fiscal roadmap. The tax reform proposed in the 2009 budget is one of these steps."
You may recall that, a few years ago, Ohio's then-governor, a Republican, took similar measures, which were subsequently embraced by his Democratic successor, Ted Strickland. To my mind, that policy and Ohio's three consecutive Site Selection Governor's Cup Awards and its Department of Development winning the 2008 Competitiveness Award (page 310) are no coincidence. Congratulations, again, to Ohio and to the winning communities in this year's Top Groups recognition. And way to go, New Brunswick!