Driven by contracts, convenience and transit trends,
an Italian railcar maker wants to manufacture in California.

desire to stop shipping railcars halfway around the world has helped convince an Italian manufacturer to commit for the long haul.

On a 20-acre (8-hectare) brownfield parcel where bus coaches once were manufactured, along the Los Angeles River just east of downtown L.A., Italian manufacturer AnsaldoBreda plans to locate a US$70-million manufacturing plant, its first in North America, to make light-rail cars for the Los Angeles County Metropolitan Transportation Authority (MTA), and to establish a foothold for the high-speed rail revolution to come in the United States.

Final details were being hammered out in October on a unique and unprecedented agreement that features a 50-year lease term from the Community Redevelopment Agency (CRA) of the City of Los Angeles (with two 10-year renewal options), a base rent of approximately $900,000 a year, a non-refundable pre-payment of $15.1 million, a $5-million letter of credit and $30-million corporate guarantee, and reappraisal and escalation clauses. The company will make the pre-payment once it begins construction of the 270,000-sq.-ft. (25,083-sq.-m.) plant.

"That's important to us because we financed the acquisition of that property," says Calvin Hollis, CRA's deputy chief of operations for real estate. "So we will be able to pay off that loan, even though they are occupying only 14 acres [5.7 hectares]."

The plant will anchor the CRA's CleanTech Manufacturing Center, a site located at one end of a four-mile (6.4-km.) stretch called the CleanTech Corridor, and also positioned (a) at the northern terminus of the Alameda Corridor Improvement Project, (b) within the Central Industrial Redevelopment Project Area, (c) adjacent to a rail line that feeds right into the MTA railyard just to the north, and (d) within both a federal empowerment zone and state enterprise zone.

"The industrial area in this portion of Los Angeles is long established and largely built up, with very few vacant parcels available," says Hollis, "so it's a key strategic property from that perspective."

He says the state acquired the property a number of years ago with the intention of building a prison. "The community convinced the state that was a bad idea," he says.

Instead, CRA eventually negotiated an agreement whereby the state paid for site remediation, and CRA acquired the property in April 2008.

"We began an internal process of deciding how to dispose of it," says Hollis, though an outright sale was not on the table. "Our objective was always to put it to use to generate good paying jobs. About the time we began drafting a solicitation document, AnsaldoBreda came to town and began negotiating with our local transit agency to build additional railcars for the light rail system. AnsaldoBreda said they'd develop a manufacturing facility here in Los Angeles if that contract was extended."

Negotiations between CRA and the company began in early fall 2008. The MTA board chose to exercise its option on the AnsaldoBreda contract in May 2009, for the manufacture of 100 new cars and the refurbishment of existing rolling stock.

In the meantime, the company was doing its environmental and other due diligence: "They had to literally drive the site with super big trucks that transport the cars, so they knew they could transport them if for some reason they couldn't get rail acess," explains Hollis. "It's also an irregularly shaped property, so there was a fair amount of site planning to make sure their production process could be accommodated."

Until now, AnsaldoBreda has manufactured its coaches in Pistoia, Tuscany, with U.S. assembly sites in Atlanta and in Pittsburg, Calif., near San Francisco, both locations where it services transit contracts. The company moved its U.S. corporate headquarters to Pittsburg in 2007, and has done business in the U.S. since 1978.

Previously, L.A. transit cars would be 70-percent completed in Italy before beginning their own adventurous transit. A company official speaking on background says the new project will circumvent huge logistics costs and headaches associated with shipping via the ports of Genoa and Houston, and special transportation requirements in getting the railcars moved with police escorts over roadways all the way to their U.S. destinations.

It will also create some 535 manufacturing jobs, and another 125 associated with the firm's West Coast corporate regional office. AnsaldoBreda prizes the engineering and metalcrafting expertise resident in the longstanding aerospace work force in L.A., says the official.

Hollis says there are other brownfield parcels in the area, many privately owned. CRA is about to issue an RFP for a remediated nine-acre (3.6-hectare) site, as well as a separate RFP for the remaining acreage at the CTMC site.

"The last numbers I saw said the vacancy rate for industrial buildings in Los Angeles was about 3 percent, and it was less than 2 percent before the recession started," he says. "If you can make land available, there's a lot of interest."

There is a lot of interest in transit improvement as well, against the backdrop of the November 2008 passage by two-thirds of Los Angeles County voters of Measure "R," a half-cent sales tax projected to commit $40 billion solely to traffic relief and transportation upgrades over the next 30 years. The measure went into effect July 1, 2009.

Hollis says the AnsaldoBreda project is a great win, but it's just a small parcel along a corridor that's four miles long. "We think based on AnsaldoBreda's experience that some of their suppliers may want to locate near them," he says. "They purchase a lot of components to put together these train cars, and we expect some interest in finding sites close to this manufacturing facility."

The context extends much farther, as AnsaldoBreda positions itself to compete for high-speed rail and other contracts nationwide. The company official says it's the perfect time to put full-scale manufacturing on U.S. soil, as bids and RFPs for trains and transit proliferate.

The best-case scenario envisions the new plant simply meeting the huge demand on the West Coast alone. The worst-case scenario means the new facility serves the entire U.S. In the meantime, he can foresee the time when, depending on contract award volume, more such sites are built to serve both U.S. and global markets. 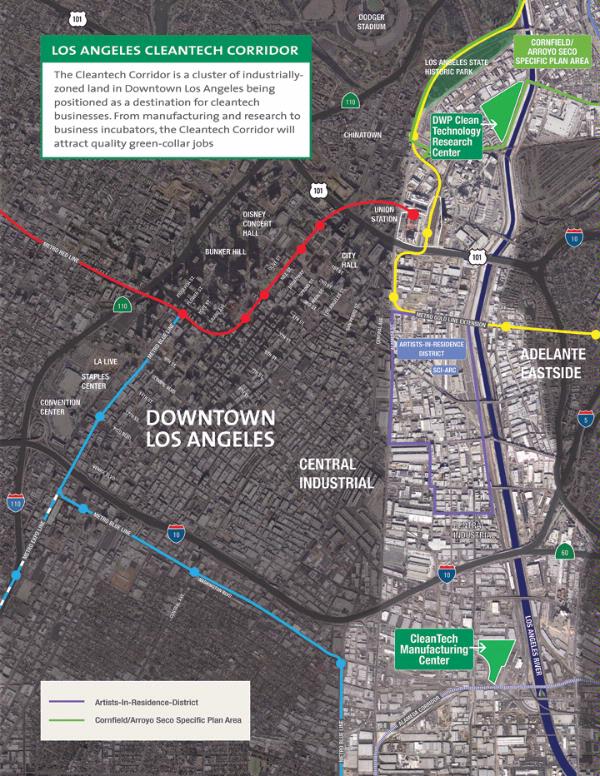 The AnsaldoBreda facility will anchor the CleanTech Manufacturing Center, located at one end of the four-mile (6.4-km) CleanTech Corridor that Los Angeles officials hope to see blossom in coming years.
Community Redevelopment Agency of the City of Los Angeles 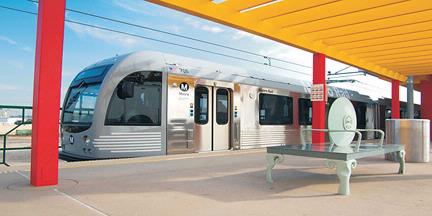