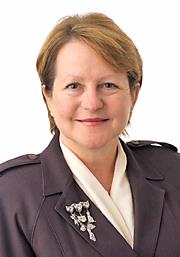 egeneron was a fledgling biotech firm employing four people when it moved to the Landmark at Eastview campus in Tarrytown, N.Y., a little more than 20 years ago. Now the company is a major part of a burgeoning biotech cluster in the Hudson Valley region.

To accommodate its own growth, Regeneron recently moved into a new corporate campus at Landmark, now encompassing four buildings with plans to move into a fifth.

With the new buildings, Regeneron will occupy approximately 390,000 sq. ft. (36,231 sq. m.) in four buildings on the 116-acre (47-hectare) Landmark campus. The company employs more than 1,000, about 750 of whom work at Landmark. Regeneron also has a manufacturing facility in Rensselaer, N.Y.

The latest $40-million building derives from Regeneron's expansion of its R&D collaboration agreement with Sanofi-Aventis. Regeneron is adding 400 employees as a result, with 300 of those in Tarrytown. The two companies recently announced that Sanofi-Aventis, which provides Regeneron with $100 million annually for antibody research, would increase its annual funding to $160 million from 2010 to 2017.

Regeneron, which discovers, develops and commercializes medicines for the treatment of serious medical conditions including cancer, gout, and retinal diseases, will use the new facilities for its research and development laboratories, clinical development staff, corporate headquarters and administrative offices.

Regeneron has been located in various buildings at Landmark since 1989, but it now has its own campus in the huge science park. Regeneron plans on occupying the third building in early 2011, giving the company a total of 525,000 sq. ft. (48,800 sq. m.). At that point Regeneron will have 360,000 sq. ft. (33,500 sq. m.) in three buildings dedicated to the company, with the remainder in two multi-tenanted buildings.

Joanne Deyo, Regeneron's vice president of facilities, says the company moved to Landmark in 1989 in part because its founder Leonard Schleifer was impressed that IBM had chosen to locate in the area. She says the company's expansion traces back to 2006.

"We knew our lease was expiring soon so we knew we had to look at our real estate strategy," Deyo says. "We performed a site search in the tri-state area of New Jersey, New York and Connecticut. We had finalists in both New Jersey and New York that we looked at seriously."

As it turned out, Regeneron elected to stay home and continue to work with its long-time landlord BioMed Realty for its space needs. BioMed purchased Landmark in 2004.

"We see our relationship with BioMed as a partnerhip," Deyo says. "They were a relative newcomer, having recently formed just before they bought the site. They brought to the table a unique perspective we hadn't seen in our previous landlord. They understand what we need. It's been a fabulous thing for Regeneron as well as the other tenants."

A major consideration was that staying in the same park wouldn't require the wholesale uprooting of employees. State and local incentives helped seal the deal. Regeneron received a $2.25-million grant from the Empire State Development Corp. The Westchester County Industrial Development Agency provided sales tax abatement and payment-in-lieu-of-taxes (PILOT) incentives worth about $1.5 million.

"New York State is trying to foster the idea of creating a biotech cluster, and it's only going to benefit our industry," Deyo says.

The cluster includes OSI Pharmaceuticals, which just consolidated its U.S. operations and 350 employees into a single campus in Greenburgh, also in Westchester County. It hopes to add 400 jobs at the site by 2014.

Regeneron worked closely with BioMed in the design of the shells of the buildings, with BioMed turning them over to Regeneron for fit-out. BioMed also added a few things tailored to Regeneron's specific needs, such as a much larger freight elevator to handle the company's large equipment.

"We worked to make sure the overall design would suit our needs," Deyo says. "Although we didn't seek LEED certification, we tried to apply its principles where we could. We did a white roof to reflect sunshine and we used natural lighting and sustainable materials extensively throughout the building."

Also, for the first time Regeneron will have its own corporate lobby with its logo. "It's important to us as a company," Deyo says. "It lets people know that when they walk into the lobby they have reached Regeneron."

Another amenity is a courtyard between the company's two primary buildings.

"It was originally designed to be a big parking lot. I wouldn't accept that, and had a lot of discussions with senior management. So instead, we were able to design a green courtyard with flowering trees as well as some parking. It has turned out to be a fabulous space, and adds to the campus feel."

tarwood Hotels & Resorts plans to move its global headquarters from White Plains, N.Y., to the waterfront Harbor Point development in Stamford, Conn., a development that is already home to such firms as Deloitte & Touche and Pitney Bowes.

"Not only did the State of Connecticut provide meaningful incentives that translate to a savings of 20 percent per year in rent, but we will also have the opportunity to design office space that reflects Starwood's leadership in global hospitality, design and brand-building, as well as our commitment to the environment and our communities," said Frits van Paasschen, president and CEO of Starwood.

He said the search took three years and included scrutiny of sites in Georgia, New York and Florida.