Not To Be Outdone

Mississippi claims its place at the Southeast’s booming aerospace table. 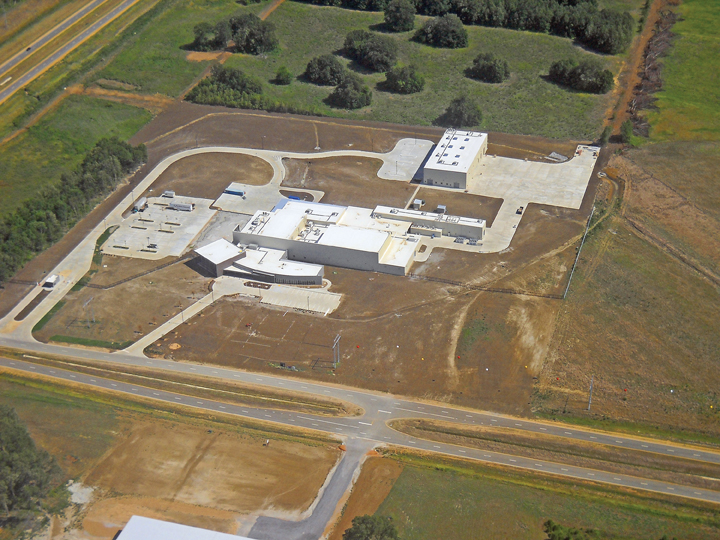 Stark Aerospace opened an 86,000-sq.-ft. (7,900-sq.-m.) facility in November at this site at the Golden Triangle Regional Airport in Columbus, Miss., where it develops unmanned aerial vehicles.
Photo courtesy of Stark Aerospace
by MARK AREND
M

ove over, automotive industry. You've got company. The entire Southeast is home to a thriving aviation industry, and Mississippi is no exception.

North Charleston, S.C., landed the Boeing 787 assembly plant in the fall, and Northrop Grumman-EADS might yet build its KC-135 refueling tanker in Mobile, Ala. (if the bid provisions are ever finalized). When the next big aerospace deal comes to fruition, it might well be in one the Magnolia State's many aerospace parks — there are seven in the Gulf Coast part of the state alone (see www.mscoastaerospace.com for a directory and other resources), and a new one — the GTR Global Industrial Aerospace Park — was announced in Columbus, Miss., on October 19. The 2,500-acre (1,102-hectare) park in Lowndes County is adjacent to the Golden Triangle Regional Airport, which is a key component of a growing, local aerospace cluster. Columbus Air Force Base, with its supply of test pilots and aerospace-specific technical workers, and the Raspet Flight Research Laboratory at Mississippi State University in nearby Starkville are two others.

Three aerospace companies — American Eurocopter, Stark Aerospace and Aurora Flight Sciences — already employ a combined 600 workers in the area, and more are on the way.

Vote of Confidence in Starkville

In November, Stark Aerospace, a subsidiary of Israel Aerospace Industries, opened a new, 86,000-sq.-ft. (7,900-sq.-m.) facility at GTR Airport. Stark builds Hunter and Heron unmanned aerial vehicles. Aurora Flight Sciences makes composite materials for use on the aircraft; both companies got their start at the Raspet Flight Research Lab.

"I have always believed in the potential of the greater Starkville area's ability to attract aerospace projects," says Pennsylvania-based site consultant Bill Boyd, who has helped site several aerospace projects in the Southeast and elsewhere, including Boeing's Delta Launch Rocket facility in Huntsville-Decatur, Ala. (That site won out over Titusville, Fla., and a site in Hancock County, in southern Mississippi, near the Stennis Space Center.)

Starkville's success, says Boyd, "is driven largely by Mississippi State University and its aerospace engineering department and the Raspet Flight Laboratory." Honda worked on composite materials R&D at the Raspet site, which Boyd says are used in the HondaJets being built in North Carolina's Piedmont Triad region. "The area has parlayed this potential it has into a thriving aerospace sector.

"When you see things happening like what's going on now at the Golden Triangle Park, those things begin to build on themselves," says Boyd. "It's like when Alabama attracted Mercedes, in that everyone noticed. In a few years, Alabama became the automotive center of the South."

On the Governor's Radar Screen

Meanwhile, on Oct. 26, Mississippi Gov. Haley Barbour joined Alabama Gov. Bob Riley and Louisiana Gov. Bobby Jindal in the launch of The Aerospace Alliance, a 501(c)(6) initiative, of which Florida is also a member, to establish the Gulf Coast region as a "world class aerospace, space and aviation corridor," with the first order of business being to bring the Northrop-Grumman-EADS KC-45 aerial tanker program to the region.

"This alliance will go far in promoting our region for what it is — one of the largest aerospace corridors in the world and a great place for companies in this sector to do business," said Gov. Barbour. "The Gulf Coast states share geographic proximity, a long tradition of aerospace and aviation activities and a skilled and experienced work force, and by joining together, we will be well positioned to take advantage of opportunities to grow this sector in our region."

In June 2009, Gov. Barbour and officials from GE Aviation announced a unique research collaboration with the University of Southern Mississippi in Hattiesburg for technology and advanced material development in the company's Composites Operation in Batesville.

On December 14th — a day before the first test flight of Boeing's 787 Dreamliner in the skies of Washington — GE Aviation announced it would add about 350 jobs in Batesville. "Our Batesville operation is involved in some of the most advanced manufacturing processes in the aviation industry," said Jeanne Edwards, GE's plant leader in Batesville. "Also, GE is very fortunate to have a strong order book for its new GEnx engine. Many of the technology advantages inherent in the GEnx engine are linked directly to the components produced in Batesville." The expansion will represent an investment of approximately $85 million. The Mississippi Development Authority provided $8.6 million in Momentum Mississippi incentives to assist with this project.  In addition, Panola County provided $4 million to assist with the expansion.

GE's partnership with the Southern Miss School of Polymers and High Performance Materials is focused on the development of advanced materials for the GEnx engine — the world's only jet engine with composite fan blades, fan platforms and fan case. The GEnx engine will power the Boeing 787 and 747-8 aircraft. The collaboration is supported with a grant of approximately $2.4 million from the Mississippi Development Authority, the state's lead economic development agency.

"GE's relationship with Mississippi leaders and the state's university system has been outstanding," said David Joyce, president and CEO of GE Aviation, headquartered in Cincinnati. "Simply put, we are teaming on unique technologies that ultimately impact future air travel."

Look for more reporting on the aerospace sector in the U.S. Southeast in the March 2010 issue of Site Selection.