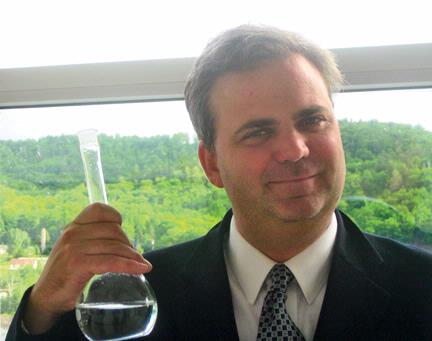 Carbon Capture's technology takes carbon dioxide and natural gas and turns it into syngas through the use of nano-structured catalysts made of cobalt. Carbon Capture uses nanostructured catalysts made of cobalt in a high-efficiency process. Wilson says the process has achieved 94 percent efficiency. He says other syngas processing methods used by large energy companies use iron as a catalyst and achieve an estimated 30 percent efficiency.

"Every gallon of diesel produced from this can be made from greenhouse gas," Wilson says. "It's lower in sulphur and it can be blended with regular diesel to extend its use."

The project has thus far been funded through private investors and the U.S. Department of Energy. The next stage is to find funding to push the project toward commercialization. Wilson says representatives from San Francisco law firm Orrick recently visited Louisiana Tech to take a look at Carbon Capture's test reactor.

"They have declared that we are much further along than our competition and that we are investment grade at this point. They are convinced that we should pursue large dollars," Wilson says. "There is no more proof of principle left."

Wilson describes the long-range possibilities for Carbon Capture as "sky-high."

Louisiana Tech's Nanosystems Engineering Program was established in 2005 and was the first such program in the U.S. The university has been recognized by Small Times magazine as one of the top institutions in nanotechnology.

"Louisiana Tech has been very successful in leveraging the money we have to commercialize products," Wilson says. "We are very focused on commercialization."

A New Gateway at Gateway

North Carolina's nanotech efforts figure to get a substantial boost with the opening of the Joint School of Nanoscience & Nanoengineering (JSNN) in 2011. JSNN is a collaborative project between North Carolina Agricultural & Technical State University and the University of North Carolina at Greensboro. A US$58-million, 100,000-sq.-ft. (9,290-sq.-m.) facility is being built on the south campus of Greensboro's Gateway Research Park. Two degree programs are planned: Professional Master of Science in Nanoscience and Ph.D. in Nanoscience. The region already has a renowned nanotech program in the Center for Nanotechnology and Molecular Materials at Wake Forest University in Winston-Salem.

QuarTek Corp., based in High Point, is perhaps the region's best-known nanotech firm. It was started by Reyad Sawafta, the company's president and CEO, in 2004. QuarTek specializes in development of products in green energy, water purification and antimicrobial applications in textiles, building products and medical devices. QuarTek is partnering with two Asheboro, N.C., companies, Vesture and Phase Change Energy, in the development of a green insulation product for residential and commercial buildings.

The region has about 10 nanotech companies, a figure Sawafta believes will grow in the coming years.

"The nanotech school will be a catalyst for bringing many new companies to the area as well as to commercialize technology," Sawafta says. "I believe the cluster will thrive and in the next five years or so, nanotech will be equal with biotech in the Triad."

Massachusetts elected officials and industry leaders are calling for the formation of the Advanced Manufacturing Initiative, a public-private collaboration that will support job creation, export growth, innovation and economic recovery throughout Massachusetts. The partnership between manufacturers, academics and policymakers will identify strategic opportunities for manufacturing growth and state strategies to enhance the sector's competitiveness. The announcement came at a recent advanced manufacturing summit held at American Superconductor Corp. (AMSC) in Devens.

Gov. Deval Patrick also announced a new loan program from MassDevelopment, the Manufacturing Innovation Initiative (MI2), a multi-tiered loan program to help Massachusetts manufacturers invest in innovation, adopt advanced production practices, upgrade facilities and buy equipment. MI2 will reduce interest rates on real estate and equipment lending to manufacturers, while the new planning and growth initiative loans will encourage companies to improve operations and pursue expansion opportunities. Planning loans will be up to $50,000 and growth initiative loans up to $500,000.

"The Commonwealth of Massachusetts is renowned for its innovation and is home to many of the world's leading advanced manufacturers that have significant potential for job creation," said Dan McGahn, president of American Superconductor Corp. "Over the course of the past few years, AMSC has added 500 new workers globally to meet a six-fold increase in revenues … We look forward to collaborating with this group to implement a plan that will add further jobs here in the Commonwealth."

Another building block in the state's push for advanced manufacturing is in Lowell, where UMass Lowell is building a $70-million Emerging Technologies and Innovation Center. The 84,000-sq.-ft. (7,804-sq.-m.) building will be home to experts in cutting-edge fields including nanotechnology, plastics engineering, biomedicine and electro-optics. Recognized as an international leader in advanced manufacturing, UMass Lowell is expected to draw researchers from around the world to collaborate with faculty and students at the center, as well as work hand-in-hand with industry.

The center is expected to be completed in 2012 and will create hundreds of new private-sector jobs in its first five years of operation, as well as more than 400 construction industry jobs.

"A center wholly focused on advanced manufacturing and research and development will help position UMass Lowell and the region to take advantage of growth opportunities in these emerging industries while bringing excellent new jobs to our region," said U.S. Rep. Niki Tsongas.

Put Your MIND to It

"All four NRI centers are working on some aspect of trying to find a replacement for CMOS transistors," says Bob Dunn, managing director of MIND. "Because transistors are becoming smaller, they are generating more heat and are difficult to keep cool."

The common goal of the NRI centers is to discover and develop the next nanoscale logic device — one with performance capabilities beyond conventional devices, enabling it to become the basic building block of future computers. MIND research is organized around two themes: energy-efficient devices and energy-efficient systems. In addition to funding from NRI, MIND is supported by the City of South Bend and the State of Indiana.

The burgeoning nanotech cluster in North Carolina’s Piedmont Triad region figures to get a boost when the Joint School of Nanoscience & Nanoengineering opens in Greensboro in 2011. It is a collaborative project between the University of North Carolina Greensboro and North Carolina A&T University.
Photo courtesy of JSNN 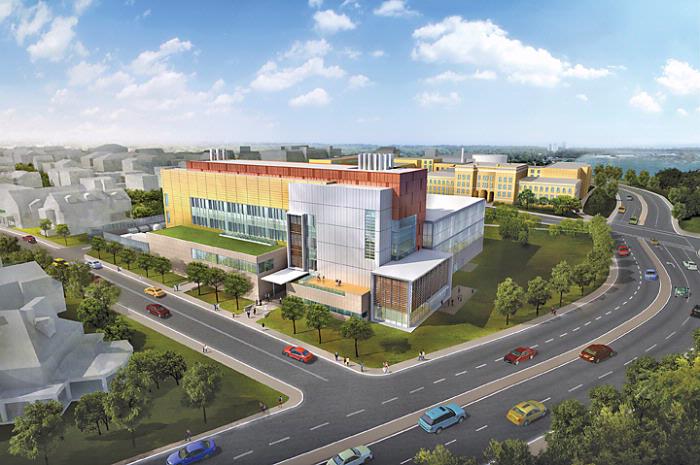 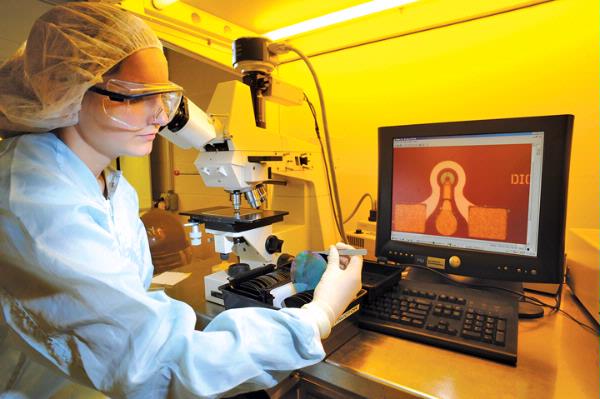