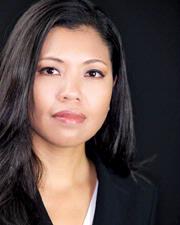 rom east to west to assorted points in between, the energy sector in Arkansas — both renewable and traditional — continues to thrive.

Mitsubishi Power Systems Americas, a division of Mitsubishi Heavy Industries, intends to spend US$100 million to build a 200,000-sq.-ft. (18,580-sq.-m.) nacelle factory near Fort Smith, in the northwest corner of the state, in a part of the former Fort Chaffee which was closed following the 1995 round of BRAC. Construction is due to begin in October with completion expected in September 2011. Production will begin in January 2012 with a projected work force of about 400.

Since that project's announcement, Mitsubishi filed an antitrust lawsuit against General Electric Co. In the complaint filed on May 20 in the U.S. District Court's Western District of Arkansas, Mitsubishi alleges that after it gained a foothold in the U.S. market in 2006, GE embarked on an unlawful anticompetitive scheme to drive Mitsubishi suppliers out of the U.S. market.

On the same day, attorneys for Mitsubishi Heavy Industry, Ltd. (MHI) filed suit in U.S. District Court's Middle District of Florida against GE charging them with infringing a key Mitsubishi patent for variable speed wind turbines, alleging that GE has been making, using, selling and offering to sell infringing turbines without any authorization or license to do so. Mitsubishi is seeking damages it estimates to be in excess of $1 billion.

Mitsubishi Power Systems Americas corporate counsel Sonia Williams said in a statement announcing the lawsuit that if "GE's unlawful conduct" continues the Arkansas plant might have to sit idle. But Williams tells Site Selection that the company will begin construction this fall.

"We are fully committed to building this facility and staying in Arkansas and having this facility operate at full capacity," Williams says. "We intend to vigorously pursue this lawsuit and expect to prevail. We are going forward with the project."

Williams says Mitsubishi selected the state because of its central location relative to potential wind development sites around the U.S. and because of its skilled labor force.

"Arkansas is a business friendly state and the state actively assisted Mitsubishi in finding a suitable site," she says.

The new plant will be the company's first nacelle production plant located outside of Japan. Mitsubishi already has a turbine blade manufacturing plant serving the U.S. market: VienTek, LLC, located in Mexico. MPSA currently has more than 4,500 wind turbines in operation worldwide, and more than 3,000 wind turbines in the U.S.

German firm Nordex had the largest wind equipment startup in Arkansas in 2009 with its $100-million wind turbine, nacelle and blade facility in Jonesboro. The operation will eventually employ about 700, Nordex says. Now, the company's suppliers are starting to land nearby.

Beckmann Volmer, a manufacturer of major steel components for wind turbines, plans a new manufacturing facility in Osceola. The company, a direct supplier to Nordex and to other wind-energy companies, will invest $10 million in the new facility, where approximately 300 people will be employed at an average hourly wage of $18. Steel components manufactured by Beckmann Volmer have a wide variety of applications in a wind turbine. The largest component to be produced in Osceola will be turbine main frames — the structural backbone of the turbine.

"We chose Osceola for the quality of its work force, its proximity to customers and its infrastructure," says Thomas Grigoleit, project manager for the Arkansas facility and the company's sales manager in Germany.

Beckmann Volmer also has production facilities in Germany, Poland and China. Grigoleit says the Arkansas plant will supply other major wind OEMs in addition to Nordex. "We will begin building the facility in July and plan on having a fully functioning production site in March 2011," Grigoleit says.

Beckmann Volmer considered about 100 sites in the South and Midwest. The company says it may also consider a future investment of $7.5 million and the addition of 200 more employees.

Oil and gas line pipe specialist Welspun aims to be well-prepared for increased demand for products made at its sprawling Little Rock complex by the Arkansas River. Just a year after dedicating its new facility, Welspun is embarking on a major expansion in equipment and personnel. The new $30-million investment in equipment and infrastructure will accompany a planned increase in employment of 230, bringing the total number of jobs at the site to around 650. With this expansion, Welspun will more than double the work force at the plant since its opening.

"One year ago, Gov. Mike Beebe and I celebrated the inauguration of our Little Rock facility," said B.K. Goenka, chairman and managing director of Welspun. "I had promised we would build one of the finest mills in the world. This facility has achieved success which is much ahead of any other mill in the industry. Recent significant pipe orders will further boost the progress of this facility, positioning Welspun to serve the energy industry for years to come."

Rajesh Chokhani, Welspun's vice president, commercial, was its first U.S. employee, traveling throughout Gulf States and up and down the Mississippi during the second half of 2006. A water route for delivery of heavy raw materials was a key factor, he says. The others included rail access and a large tract of land. The project, which was developed on a 740-acre (300-hectare) tract adjacent to the Port of Little Rock, also had to come together fast.

"It was very critical because we had very fast-paced orders," Chokhani says. "An operation like this usually takes 30 months to construct, but we were in operation in 18 months. We worked with a very dynamic team of state and local chambers," Chokhani says. "Little Rock has a magnificent team. Since we had done some surveys, we knew where pipelines are going to be built through 2015. Arkansas and Little Rock are centrally located and logistics are a very huge cost in this business."

Welspun receives its raw materials via river barge and then ships products by rail.

The economic downturn has curtailed business, but the Arkansas plant has had large orders to carry it through. The expansion, which will turn the plant into a 24/7 operation, will help position the company for a future upturn.

"Moving forward, it is very important that we build up capacity to sustain large projects," Chokhani says. "There is high volatility in the market and customers now want fixed pricing. They don't want to take any amount of risk. We have to have a good supply of steel, which is 75 to 80 percent of our costs. That requires a huge capacity at our end to make sure if I book an order, that we will be able to stock that much material and not be exposed to prices."

One major challenge during the process, a challenge Chokhani says the company was aware of during its site due diligence, is a shortage of personnel with the expertise the company needs.

"Little Rock did not have any large-diameter pipe companies and to find people who have this expertise is a challenge, not just in Arkansas, but across the country."

Chokhani says Welspun has worked with every university and college in Arkansas and some in neighboring states to develop its work force.

Where the pipe market goes from here is anyone's guess, but Chokhani believes there will be a gradual pick-up. He says the Arkansas plant does not currently supply offshore oil drilling as all five of its completed projects have been onshore. However, the BP spill in the Gulf will delay future permits, which will push new offshore oil and gas projects deeper into the future.

"It's very difficult to predict the market, especially with the Gulf oil spill. It will have a long-term effect because projects will be delayed."

Welspun has won major orders from El Paso Corp. and TransCanada Pipeline and is exploring opportunities to export pipes for many large projects under way in Mexico.

The company is relatively new, having started in 1985 as a textile yarn producer. Its most recent foray is in the solar and hydro energy business through its Welspun Energy subsidiary. 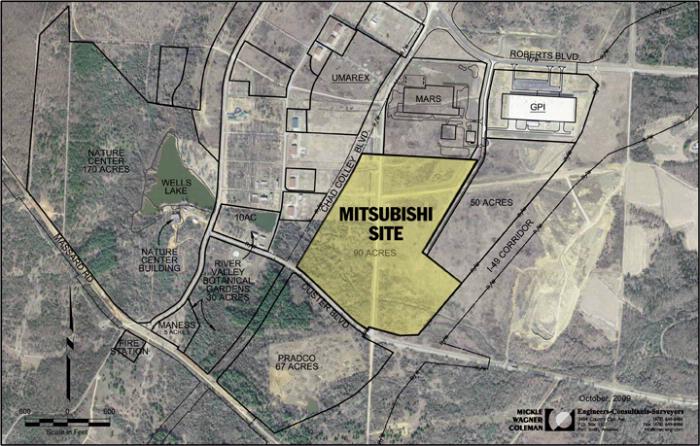 Mitsubishi Power Systems plans a $100-million nacelle plant on this 90-acre tract on property of the former Fort Chaffee near Fort Smith.
Image courtesy of the Fort Smith Regional Chamber of Commerce 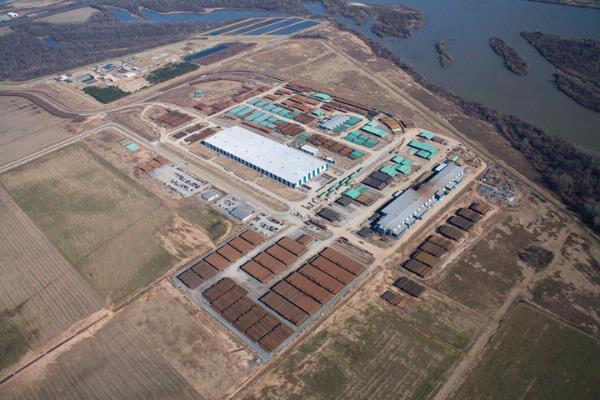