Look At the Data 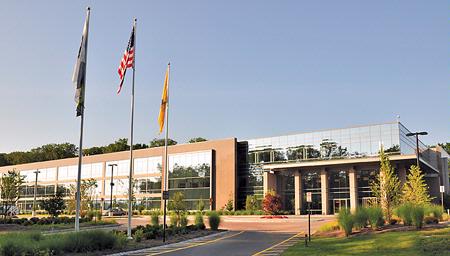 A new governor offers no spoonful of sugar with his reforms. But several cities will gladly take their medicine in the form of life sciences and data center investments.

hen a former U.S. Attorney in New Jersey is elected governor, and teams up with a lieutenant governor who fought corruption and crime as a federal prosecutor and sheriff, chances are they won't back down when it comes to such pedestrian matters as reforming the state's business climate and restructuring the state's own ways of doing business.

But even as Gov. Chris Christie, a lifelong New Jersey resident, seeks new prescriptions for economic vitality, a steady injection of life sciences and data-driven investment continues in the state.

Since January 2009, according to the Conway Data New Plant Database, some 10 percent of corporate facility projects have come from the state's dependable pharmaceutical sector. And among the top 20 or so projects by investment, approximately one-fifth are either single-user or wholesale data centers — some of the latter specifically targeting the biomedical and financial firms flocking to the state.

In late May, life sciences business services and software solutions provider Intrasphere Technologies announced it would relocate 120 jobs from New York City to Jersey City when its lease expires at the end of June 2010, and create 180 new jobs there over the next two years.

"New Jersey has made it clear to us that they are interested in our business, and in helping Intrasphere grow," said Samuel Goldman, Intrasphere co-founder & COO. "As a life science–focused company, it's encouraging to be in the same state that many of our clients call home."

In February 2010, New Jersey awarded Intrasphere a Business Employment Incentive Program (BEIP) grant worth an estimated US$12.4 million over 10 years. The grant was a material factor in its decision to move its corporate headquarters to New Jersey, the company said. Meanwhile, Intrasphere expects to invest $965,000 in the relocation.

Intrasphere might be looking to call on Watson Pharmaceuticals, which just a week prior had announced its commitment to expand into a new administrative headquarters at Morris Corporate Center II in Parsippany that will bring together separate operations currently 11 miles (17.7 km.) apart in Morristown and Parsippany, and provide adequate space for future expansion.

The company's $15-million expansion project received a BEIP grant worth an estimated $7.3 million over 10 years, and the company has been approved for a $290,000 Business Retention and Relocation Assistance Grant (BRRAG) from the New Jersey Economic Development Authority (NJEDA) to support the retention of over 200 jobs in the state. The company expects to relocate to the new Parsippany facility by late 2010/early 2011.

Watson, which currently employs approximately 225 people at the two sites, expects total employment at the new facility could grow to approximately 500 over the next few years. Watson will occupy an entire building within a multi-tenant corporate office complex and will also have an entire floor of an adjacent building totaling 148,700 sq. ft. (13,814 sq. m.), with the option to acquire additional space if future expansion requires it. Watson's current New Jersey administrative space totals approximately 80,000 sq. ft. (7,432 sq. m.).

Watson, a maker of generics and of specialized products focused on urology and women's health, is headquartered in Corona, Calif. In addition to international sites around the world, it operates pharmaceutical ingredient, distribution, R&D and manufacturing sites in Carmel, Copiague and Grand Island, N.Y.; Davie and Weston, Fla.; Gurnee, Ill.; Groveport, Ohio; and Salt Lake City, Utah.

Watson established its New Jersey presence in 2000 when it acquired Florham Park–based Schein Pharmaceuticals, Inc., and moved into 40,000 sq. ft. (3,715 sq. m.) a year later. That grew by half again as much space, but that wasn't enough after Watson acquired The Arrow Group in late 2009, and had to move 80 administrative employees into interim space in Parsippany.

"This new facility will ensure that we have a single location for the leadership and shared services functions that are driving our global growth," said Paul Bisaro, Watson President and CEO.

Parsippany in early 2009 also saw an intra-Jersey move from pharma/biotech firm Wockhardt USA, a subsidiary of Indian firm Wockhardt Limited, which will move its regional headquarters from Bedminster. Advised by Studley, the company signed a 12,000-sq.-ft. (1,115-sq.-m.), four-and-a-half-year sublease, the balance of the existing lease term, for turnkey space from Clifton-based healthcare packaging company Cortegra.

In August 2009, Wyndham Worldwide Corp.'s new 250,000-sq.-ft. (23,225-sq.-m.) corporate headquarters at the Mack-Cali Business Campus in Parsippany saw the completion of interior construction management services by Gale Construction Co., which also managed construction of the facility's core and shell, along with 26 acres (10.5 hectares) of site improvement.

India-based IT services provider HCL Technologies is investing $15 million in a 35,000-sq.-ft. (3,252-sq.-m.) data center in Parsippany that it acquired from a FORTUNE 500 company in August 2009. HCL took over the center in 2008, and will employ 100. HCL said it chose the location "due to its highly skilled work force and close proximity to its U.S.-based customers in the greater New York City area, particularly those in the financial services and life sciences as well as pharmaceutical industries."

HCL in May announced a five-year, $500-million strategic engagement with Merck & Co., based in Whitehouse Station, N.J.

Driven by the cloud computing trend, data center projects are accumulating on the New Jersey horizon. Customers and communities alike are glad to let them rain down.

As recently reported in Data Center Knowledge, data center REIT Digital Realty Trust (DRT) has new centers in Piscataway and South Bound Brook, and both DRT and Sentinel have centers in Somerset. Among the newest projects is a center in Piscataway from REIT DuPont Fabros Technology, which recently has also sited new centers in Chicago and its home state of Virginia, and plans to site another in Santa Clara, Calif. The New Jersey facility will open in the fourth quarter of 2010. Other recent projects include a center from Mountain Development Corp. in Clifton, and centers from Morgan Stanley, Goldman Sachs and Switch & Data.

In October 2009, outsourced Internet infrastructure services company Savvis, advised by CresaPartners, signed a 20-year lease for 209,000 sq. ft. (19,416 sq. m.) of data center space at Hartz's Lincoln Harbor property in Weehawken. It adds to the company's existing space nearby, as Savvis responds to increasing demand from financial services customers. Savvis anticipated capital outlays for the project of $10 million in 2009 and $12 million in 2010. 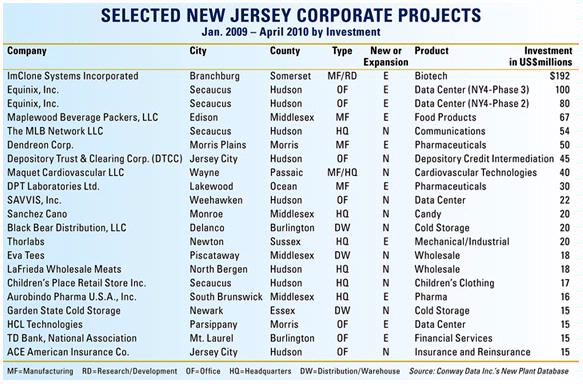 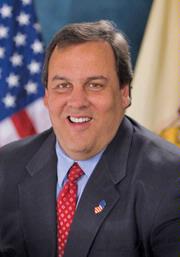 Christie's Way I: Whoa … You Got a Permit For That Rule?: "On his first day in office, Governor Christie executed a 90-day freeze on 128 proposed regulations in Executive Order No. 1. The Red Tape Review Group was initially tasked with reviewing pending and proposed rules and regulations, as well as all operative Executive Orders from previous administrations, in order to assess their effects on New Jersey's economy and to determine whether their burdens on business and workers outweigh their intended benefit.

"During this time, the Red Tape Review Group conducted a transparent and bi-partisan process in order to provide tangible and realistic recommendations that will lead to economic growth and job creation. The Group has recommended the withdrawal or modification of 16 of the 128 rules (12.5 percent) that were frozen."

So read an April 19, 2010, press release from the office of New Jersey Gov. Chris Christie. The trend continued on May 5, when the governor signed "time of application" legislation to simplify and make more predictable regulations governing land-use development applications at the municipal level, which, says the governor' office, can now move forward "without the unnecessary hurdle of constantly changing requirements while the application is pending." Exceptions are provided for those rules related to health and public safety.

Christie's Way II: Put a Lid On It: On May 10, 2010, Gov. Christie introduced his 33-bill package to reform the state's property tax situation, led by a proposal to put a hard cap on property tax increases and state spending at 2.5 percent. Current law provides for a 4-percent cap "with at least 13 broad exclusions that render the cap virtually meaningless," said the governor's office.

A report from the Manhattan Institute for Policy Research, co-sponsored by the Common Sense Institute of New Jersey, compares the new measure to Massachusetts' Proposition 2.5, which that state adopted in 1980, and which the authors have found did not impair educational outcomes.

"Real-dollar property-tax growth from 1980 to 2007 was just 22 percent in Massachusetts," said the report. "It was 68 percent nationwide and 102 percent in New Jersey."