ew data from the U.S. Bureau of Labor Statistics reveals trends in total compensation (wages, salaries and benefit costs) in private industry going back to the first quarter of 2004, by U.S. Census region.

For the first time, the data include information for 15 metro areas and combined statistical areas (CSAs), ranging from $38.62 per hour worked for the Boston-Worcester-Manchester, Mass.-N.H. CSA, and $38.52 for the San Jose-San Francisco-Oakland, Calif. CSA, to $24.00 in the Miami-Fort Lauderdale-Pompano Beach, Fla. MSA. Can’t Google This (Yet)

he Google influence is global and virtual, and surely isn't related to its physical presence or employer status in any particular geography. Or is it?

Google in late May published a new report showing its economic impact in all 50 states and D.C. The company tallied the number of advertisers who use Google AdWords and the number of Web site publishers who use Google AdSense in each state as of 2009, performed what it called conservative calculations of economic value received by those parties, and tossed in Google grant recipient data for good measure. All told, Google says it generated $54 billion of economic activity for American businesses, Web site publishers and non-profits in 2009.

The figures did not encompass economic impact from employees in each state, but Google did include notes on the 18 states where employment is significant. As it turns out, the top 15 states by total economic impact include 11 of those 18 states where Google maintains a physical employment presence. Moreover, two-thirds of the top states by Google grant dollars received also are home to Google operations of one kind or another. 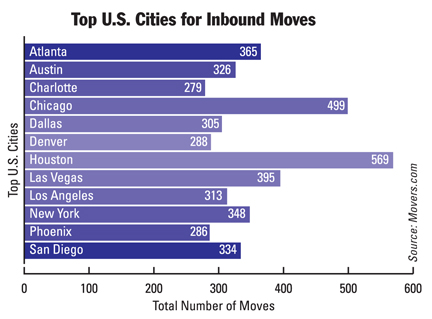 any moving companies publish data from their business to illustrate trends. So does Movers.com, a network of some 700 moving companies across the U.S. Below are the top 12 states by percentage growth in total moves performed by the network's companies, with separate bars denoting inbound and outbound moves.

No Reservations About Nashville n May, just days after historic flooding ravaged the Nashville community and such landmarks as Opryland, Loews Hotels Chairman and CEO Jonathan Tisch announced that the company would locate a $12-million 200-job shared services center in the city center, providing billing, accounting and IT services to 19 Loews properties in the U.S. and Canada that had previously performed these functions for themselves.

Tisch said the company would be moving into approximately 40,000 sq. ft. (3,716 sq. m.) of Class A office space at the Fifth Third Center in Nashville's central business district (pictured), managed by Eakin Partners Commercial Real Estate. Loews began the selection process more than six months previous with an initial list of 250 communities across the country, then refined that list to 10.

"It was then narrowed to four finalists," read a Loews statement, "and Nashville was selected because of our 21 year history in the community, the willingness of state and local government to partner with Loews Hotels, the well educated local population, and vibrancy and growth of the city."

"I'm grateful to Loews Hotels for the company's longstanding commitment to Nashville and the state of Tennessee," said Tennessee Economic and Community Development Commissioner Matt Kisber. "The successful completion of this project is a testament to the partnership between the state of Tennessee, Mayor [Karl] Dean's office and the economic development professionals at the Nashville Chamber and CB Richard Ellis."

Kisber said the project would likely qualify for a number of standard statutory incentives, including the Job Tax Credit, the Industrial Machinery Tax Credit and FastTrack Job Training Assistance. Meanwhile, a local incentive has been offered in the form of an economic development grant worth $310,000 from the Metropolitan Development and Housing Agency (MDHA) to offset the company's information technology investments.

Loews expects the facility to be operational by September.