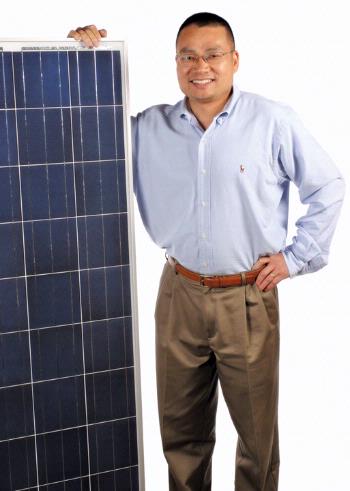 irst there was Apple. Then came Blackberry. Now another technology firm with a fruity name is aiming for its day in the sun. Grape Solar is the latest manufacturing company to join Oregon's growing alternative energy array. The company is opening an assembly facility in Eugene and will employ about 200 in the assembly of solar panels and solar kits.

Ocean Yuan, Grape Solar's CEO, says the growing number of states that offer incentives for solar panel installation, plus available federal incentives, make the time right for a U.S. assembly facility. The Eugene site is the first of six the company plans in North America. Based in Eugene, Grape Solar is backed by a consortium of Chinese solar panel manufacturers.

"We are currently manufacturing in China, however we have demand in the U.S. with certain states offering high incentives for solar," says Yuan. "This solar thing has been gradually building momentum to have a mass appeal. Consumers are thinking about it. Commercial rooftop owners are doing it because at the federal level, 30 percent of the total installed costs are paid by the investment tax credit. For example, if you have a gigantic rooftop and put $10 million of solar panels on it, the government would write you a check for $3 million within 60 days of grid connection."

Yuan points out that Oregon also treats 50 percent of the cost of solar panel installation as a tax credit. Also, effective July 1, Oregon began a pilot feed-in-tariff program administered by the state Public Utilities Commission. Homeowners may receive up to a $0.65-per-kilowatt-hour incentive for electricity generated by solar panels with a 15-year guaranteed contract. Yuan says that since the average cost of a kilowatt-hour in Oregon is 10 cents, this is a major incentive.

"The feed-in-tariff, a very popular scheme for solar energy in Europe, is now coming to North America," he says. "The return on investment in Oregon now will take five or six years, which means that homeowners will receive a cash flow from utility companies for nine or 10 years. That is the major policy that is driving solar in Oregon. That is one reason our U.S. market is expanding. The second reason is that there are customers nationally who want made-in-America solar panels."

"Another thing about Grape Solar is that unlike other solar panel manufacturers like Sharp and GE that are electronics manufacturers and have a tiny little bit of solar panel manufacturing for PR purposes, we are very focused on solar panels," Yuan says. "Instead of just selling panels, we are putting inverters and solar racking structures into one kit for consumers. To put everything together requires the right amount of space, so when selecting our site, we had a lot of considerations including space, a loading dock and easy access to the freeway. We are just 10 minutes from Interstate 5, which gives us access to our main markets in California, Arizona and New Mexico."

Yuan says the Eugene area also has a good labor pool of the electrical, mechanical and structural engineers that Grape Solar needs.

Grape Solar was originally known as Centron Solar, but a German firm with a similar name filed suit to force a moniker change. Yuan laughs when he discusses the name change.

"We are the only fruit-themed solar company in the world. When people hear our name, they say 'What solar?,' but they see it's a fruit and they remember that like Apple or Blackberry."

Grape Solar's second assembly plant will be in Hamilton, Ont. Possible sites for the next four plants are in New Jersey, Indiana, Texas and either Florida or south Georgia. All of these states have significant solar energy incentives except for Georgia, Yuan says, noting that his company may consider a site in Georgia to serve Florida. Yuan says Grape Solar is targeting $1 billion in revenue within five years. He admits that is an ambitious figure, but he says it's achievable in the solar business.

"We follow the policies of state incentives," Yuan says. "The Ontario feed-in-tariff is even wilder. It's 80 cents per kilowatt-hour. That's 10 times the current utility rate. The ROI is three years and there is a 20-year contract."

Grape Solar joins an Oregon alternative energy sector anchored by SolarWorld's massive facility in Hillsboro. The company recently announced the final phase of its ramp-up program, adding 350 jobs to the site, growing toward an eventual work force of about 1,000.

Another solar company, California-based Solexant, is reportedly considering placing a plant near Portland. The company has not officially announced plans, but has applied for a $25-million state loan to build a plant.

The alternative energy wave is also pushing companies to reinvent themselves. Miles Fiberglass and Composites, a long-time supplier to the RV industry, has now segued into also serving the wind energy sector and the new ice energy field. Miles has partnered with a Colorado company called Ice Energy to be the sole manufacturer of a new shell for an energy-saving air conditioning unit called Ice-Bear, which freezes water from the air conditioner at night to use to help reduce cooling energy needed the next day on small and medium commercial air conditioners.

"In the past, we served the RV market, making components for various RV companies in the Pacific Northwest," says Lori Luchak, the company's president. "We saw that business decrease by about 60 percent, pretty much overnight. We had already started to diversify into other areas such as wind about three years ago, by having our repair and maintenance technicians work on turbines. That pretty much saved our business. The skill sets in the fiberglass business are pretty much the same. Now we are getting into other green products such as ice energy."

Miles currently employs 64. Luchak says the company plans to expand into a larger facility in the Portland area within the next three to five years.

Genentech cut the ribbon on its new $400-million biologic fill/finish facility and warehousing and distribution center in Hillsboro in April. Genentech says it focused on Oregon and Hillsboro as a location due to an advantageous business environment, highlighted by a favorable tax climate as a single-sales factor state, and ease and efficiency in permitting. Genentech says Oregon offers a high-quality available labor force, a favorable location with proximity to Genentech’s South San Francisco headquarters, and development-ready land with adequate infrastructure to support the company’s needs.
Photo courtesy of Genentech 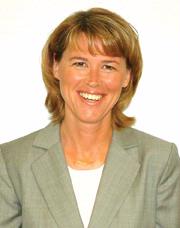 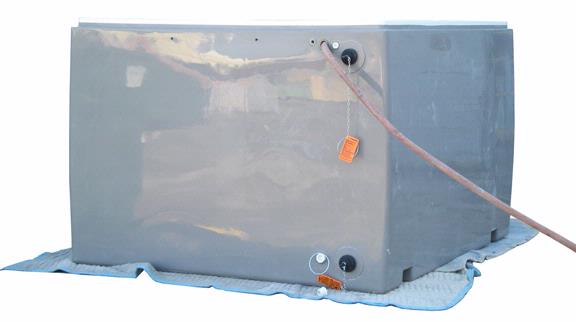