Belgium advances key sectors by virtue of
its literal and collaborative links to other nations. 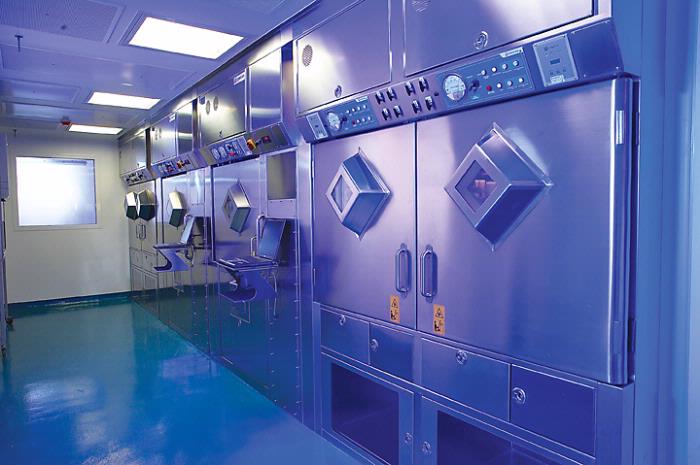 MDS Nordion opened a facility in Fleurus in 2009 to supply a radiopharmaceutical used in PET imaging.
by JOHN W. McCURRY
B

elgium is a significant center of life sciences development, both in biotechnology and in medical equipment. One of the country's recent major projects comes in Fleurus, where MDS Nordion has opened a facility for production of the F-18 FDG radiopharmaceutical used in positron emission tomography (PET) imaging. The new facility is supplying hospitals throughout Belgium, France, the Netherlands, Luxembourg and Germany.

"Our investment in this facility further demonstrates our commitment to address the growing demand for PET diagnostic imaging in targeted European regions, and provides the medical community greater service for their future patient care," said Steve West, president, MDS Nordion.

Medical Options, a U.K.-based research firm, reported in a 2009 study that PET examinations are on a rapid rise in Europe and are expected to grow at a compound annual rate of about 20 percent through 2012.

A Flemish-Dutch project, Bio Base Europe, is a joint initiative of Biopark Terneuzen and Ghent Bio-Energy Valley. Bio Base Europe consists of two parts: a pilot plant for bio-based products and processes, and a training center for process operators of bio-based activities.

Organizers say the project will transform the border region of Ghent/Terneuzen into an important center for the bio-based economy in Europe by speeding up the development of a sustainable bio-based economy through technological innovation and training activities.

Belgium drew high scores in two recent logistics reports. The World Bank Logistics Performance Index ranked the country 9th in the world. The study is based on a worldwide survey of operators on the ground (global freight forwarders and express carriers), providing feedback on the logistics "friendliness" of the countries in which they operate and those with which they trade. In addition, a recent Cushman & Wakefield report concluded that Wallonia is the top logistics region in Europe. The study cited excellent access to European markets, a central geographic location, top transportation infrastructure and low costs for land, warehouses and labor.

The KOF Index of Globalization 2010, produced by the Swiss EPFZ institute, named Belgium the world's most globalized nation for the fourth consecutive year. The KOF Globalization Index measures the economic, social and political dimensions of globalization. The current analysis refers to the year 2007.

Another recent accolade comes from the World Competitive Center of the Swiss Management Institute IMD, which ranks the country 22nd in terms of global competitiveness.

Reflecting all of those findings, traffic was brisk at the Belgian Port of Zeebrugge in 2009. The port handled 44.87 million tons of goods, a 6.8-percent increase over 2008. Strong growth in container traffic and the strong performance of the port's LNG terminal were responsible. Container traffic rose by 17 percent, while gas traffic doubled to 5 million tons. However, due to adverse global economic conditions, car transshipments were down 40 percent and truck transshipments by nearly 20 percent.

Here is a glance at recent distribution center announcements across Belgium:

The Vision on Technology (VITO) research organization and Katholieke Universiteit (KULeuven) are collaborating on a project called Energyville at a former mine site in Waterschei–Genk. The organizers aim to create one of Europe's leading centers for energy research with a goal of achieving carbon reduction. Energyville will house research workers from VITO, KULeuven and the European Institute for Innovation and Technology.

"By setting up Energyville, Flanders wants to occupy a strategic position in Europe in the field of advanced energy research and related business development," said Ingrid Lieten, Flemish minister of innovation. "Flanders has become one of the front runners in Europe, thanks to the Energyville sub-project being recognized as a European innovation hotspot for sustainable energy use in buildings and cities. This makes Flanders very appealing to foreign companies and researchers."