As the U.S. Department of Energy weighs FutureGen’s fate, support for the long-simmering clean coal project has come from Exelon and Caterpillar.
Rendering courtesy of FutureGen Alliance
H 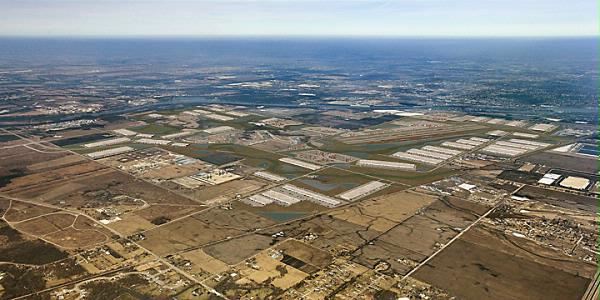 The 3,900-acre (1,580-hectare) CenterPoint Intermodal Center in Joliet soon will be home to a new $370-million, 785-acre (318-hectare) intermodal terminal from Union Pacific, an image of which is superimposed above.
Artist’s rendering courtesy of Union Pacific

eavy machinery manufacturer Caterpillar in February joined Chicago-based utility Exelon in supporting the FutureGen Alliance, which is awaiting a green light from the U.S. Department of Energy to begin construction on FutureGen.

The project, slated for a site near Mattoon, Ill., is designed to be the cleanest coal-fueled power plant in the world. The 275-MW facility will convert coal into hydrogen and electricity, while capturing and safely storing the carbon dioxide in sandstone formations a mile beneath the site. Promoters of the project say it will lay the groundwork for developing similar plants around the country and the world, pioneering the capture rather than release of greenhouse gases (GHG).

"Clean-coal plays a critical role in our energy supply, energy security and environmental protection," said Caterpillar Vice Chairman Doug Oberhelman. "The FutureGen project will demonstrate carbon capture and sequestration technologies that are absolutely essential for the world to realize reductions in GHG emissions. This alliance recognizes the global nature of climate and energy challenges and will provide domestic and international communities the groundbreaking technologies to assist in the shared goal of reducing GHG emissions."

A major provider of coal extraction machinery, Caterpillar adds its support as the U.S. Dept. of Energy prepares to decide whether to move FutureGen to the permitting phase and to groundbreaking later this year on the site west of Mattoon that has been purchased for the project. The final go-ahead depends on increasing Alliance membership and dollar contributions from the private-sector support, as well as reducing total project costs. At stake is $1.1 billion through the American Recovery and Reinvestment Act to re-launch the FutureGen project. The state has put together a comprehensive investment package that includes direct grants, financing incentives and tax-related savings, to help ensure that FutureGen comes to Illinois.

"I welcome Caterpillar's investment in FutureGen and in Illinois," said Governor Pat Quinn at the announcement. "The company's support — just over a week after another major Illinois-based company, Exelon, signed on to the project — is a clear sign that momentum for this project is gaining. This shows that the private sector stands alongside my administration and our local partners to move quickly and effectively once we receive the final 'go' from USDOE."

Once approved, FutureGen will generate much-needed jobs — as many as 1,300 construction jobs and 150 permanent jobs, by some estimates. A study conducted by Southern Illinois University showed that during the four-year construction period, there would also be 1,225 indirect and induced spin-off jobs created and more than $1 billion in economic impact statewide as a result of FutureGen.

"I am delighted that Caterpillar is joining in this long-overdue endeavor to advance our nation's energy independence and put people back to work in jobs that will prove we can burn coal cleanly," said U.S. Rep. Timothy V. Johnson (R-Ill.), whose district includes the FutureGen site. "We have been working toward this project for nearly seven years, and this decision brings us one step closer to getting under way. Caterpillar has practically written the book on sustainable manufacturing. It's a perfect fit."

Researchers and industry experts have made great progress advancing technologies for coal gasification, electricity generation, emissions control, CCS and hydrogen production. But these technologies have yet to be put together and tested at a single plant — an essential step for technical and commercial viability.

Construction began in August 2009 on Union Pacific's new Joliet Intermodal Terminal, a nearly $370-million, 785-acre (318-hectare) complex that will increase the railroad's international and domestic container capacity and improve rail traffic efficiencies in Chicago, the nation's largest rail center. Once on line, customers will benefit from Joliet's annual capacity of 500,000 ocean-going containers. The terminal is part of the CenterPoint Intermodal Center – Joliet ("CIC – Joliet"), a 3,900-acre (1,580-hectare) integrated logistics center being developed by CenterPoint Properties, based in Oakbrook, Ill.

The initial phase of construction is scheduled for completion in June 2010. The new facility, located about five miles (eight km.) south of I-80 and seven miles (11 km.) east of I-55, has additional space for future expansion based on customer demand. The Joliet Intermodal Terminal features include:

Four 8,000-ft. (2,440-m.) tracks with capacity to handle the loading or unloading of 107 intermodal "double-stack" railcars; six 8,000-ft. tracks to give train crews the ability to sort railcars by destination; an additional six tracks to stage railcars; four cranes that straddle the railcars; and two rubber-tired mobile "packers" that lift trailers and containers on and off railcars.

The cranes are equipped with Global Positioning System (GPS) technology, increasing loading and unloading efficiencies; more than 3,400 "staging" or parking places for trailers and containers; an advanced yard system that coordinates all movement of railcars, trucks, trailers and containers at the facility; AGS Gate technology that decreases truck processing time from five minutes to between 30 to 90 seconds; and a state-of-the-art security system.

CIC – Joliet is a $2-billion private investment that is expected to generate as many as 15,000 new jobs and millions in new tax revenue for local governments over the next 10 to 15 years. CenterPoint will be investing more than $200 million in new infrastructure, including roads, bridges and utilities. Of the 3,900 total acres (1,580 hectares), 975 acres (395 hectares) are zoned for rail and intermodal terminal development; 1,900 acres (770 hectares) are available for up to 20 million sq. ft. (1.85 million sq. m.) of industrial facilities (warehouse, distribution, manufacturing, cross-dock, and transloading); and 400 acres (162 hectares) can accommodate container/trailer and equipment management facilities. The remaining 625 acres (253 hectares) have been reserved for stormwater and conservation.

CIC – Joliet is an extension of CenterPoint's 2,500-acre (1,012-hectare) integrated logistics center in nearby Elwood, the redevelopment of the U.S. Army's former Joliet Arsenal. Total investment in CIC – Elwood is projected to be $1 billion at full build-out. CenterPoint has developed almost 9 million sq. ft. (836,000  sq. m.) of industrial facilities within CIC – Elwood in six years as a result of customer demand for warehouse/distribution facilities located adjacent to rail.