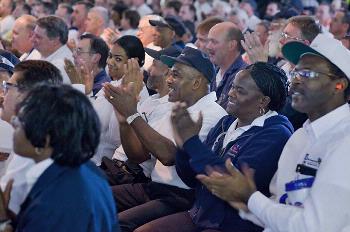 A solid footing in knowledge and flexibility scores a major investment from the new GM.

n 2006, General Motors' 71-year-old plant near the of was razed and launched on the path to redevelopment by Duke Realty as . In June 2009 GM filed for bankruptcy protection, shuttering dozens of plants and emerging later with a 60-percent stake held by the government. In early January 2010 in White Marsh, about 12 miles (19 km.) up I-95 from the razed facility site, the "new GM" announced it would invest US$246 million in a new facility and equipment to build electric motors and hybrid components at its Baltimore Transmission Plant.

That plant, nursed from conception to the decade mark by plant manager Tom Gallagher, has from the beginning been marked by flexibility in both its hardware and its work force. The speed to market such conditions can induce was a major factor in its selection for the project, says Gallagher, who in January accepted a position as plant manager of GM's castings plant in .

"The nature of the initial design has enabled its flexibility to adjust with product, market and volume changes," he says of the plant. "We have lean, agile and flexible equipment. We're able to pick up and move equipment in the course of hours and redesign our work flow."

In addition to time saved, such flexibility reduces the overall investment requirements of a new facility like the one now rising in White Marsh, which will bring with it 200 new jobs to boost the plant's overall payroll close to 400.

"It's more than project windows, it's also when we're adjusting to market changes," Gallagher says of that flexibility. "It's a real competitive factor for the site, in line with GM's thinking in all new investments across the board."

'Engines of the Future'

The new electric motor project is being aided by $105 million in stimulus funds awarded in August 2009 by the U.S. Department of Energy, $3 million in incentives from the State of and $6 million in conditional grant money from .

"Electric motors are the engines of the future," said Tom Stephens, GM's vice chairman of global product operations, at the project announcement in January. "By designing and manufacturing electric motors in-house at Baltimore Transmission, we can more efficiently control the design, materials and production processes. It will also enable us to lower costs and improve performance, quality, reliability, and manufacturability of the electric motors we use in our vehicles."

Gallagher says GM considered a number of sites for the new project, evaluating them in terms of site, technical and staffing capabilities, competitiveness of labor agreements and total cost to bring the work to the site, among other factors. He says GM's site selection team, in this and most instances, includes a project lead, flanked by a site-specific project lead, engineering, production and human resources colleagues. While some specific questions might require bringing in a logistics expert or structural engineer, those core team members know their site and equipment like the backs of their hands. "We know what those costs are," says Gallagher. "The objective is to streamline the flow, and minimize the number of steps to bring a product to market."

Since arriving in in 1999 as project manager responsible for all aspects of the new operation, Gallagher helped foster a strong partnership that included union leadership, county government, state government and the Community College of Baltimore County, where the company helped to develop a new training and employee development curriculum. Gallagher also served for five years as the chairman of a consortium of Maryland-based manufacturers known as the Regional Manufacturing Institute.

He describes the state and county as "very cooperative" in working creatively to support the project and its time frame. But in an era when automotive location trends consistently point to non-union locations, the investment stands out for the superior nature of GM management's relationship with UAW Local 239.

"Fundamentally, it's the competitive nature of our labor agreement that has enabled our ability to bring to market the product with the least amount of costs," says Gallagher. "We've established union leadership as part of our business team. They recognize that the success of the business leads to the success of employees and job security. It's very important to have open lines of communication to meet that level of engagement between the two groups. If we can address problems on the floor — not arguing or having disagreements on how we handle issues — we can work on how to handle the product in the marketplace."

Another big plus is the work force's straightforward expertise: "Having experience with this level of technology was a key enabler to the site."

More particularly, the plant's flexible operating schedule has helped keep costs down as well, with a series of production plans driven by customer requirements that mean work schedules ranging from four to six days per week. The current Monday-through-Thursday schedule "allows us to operate at a more affordable level, and is key to generating lower operating costs for the site," says Gallagher. "We've operated six-day schedules with employees rotating on a four-day schedule. That level of flexibility throughout has been very helpful."

In the meantime, the federal government now owns that 60-percent piece of GM. Asked how the new GM's day-to-day work processes, project management and decision-making is affected by the arrangement, Gallagher says, "The ownership stake by the government has not had a direct impact, but the structure of the new GM has."

The company is trying to smooth out processes in order to drive to quicker decisions and, hence, quicker product delivery to market, he says, with a focus on quality and overall cost, backed by safety initiatives. "Business processes have been simplified and streamlined, and decision-making has been simplified around project investments and around contracting and sourcing." 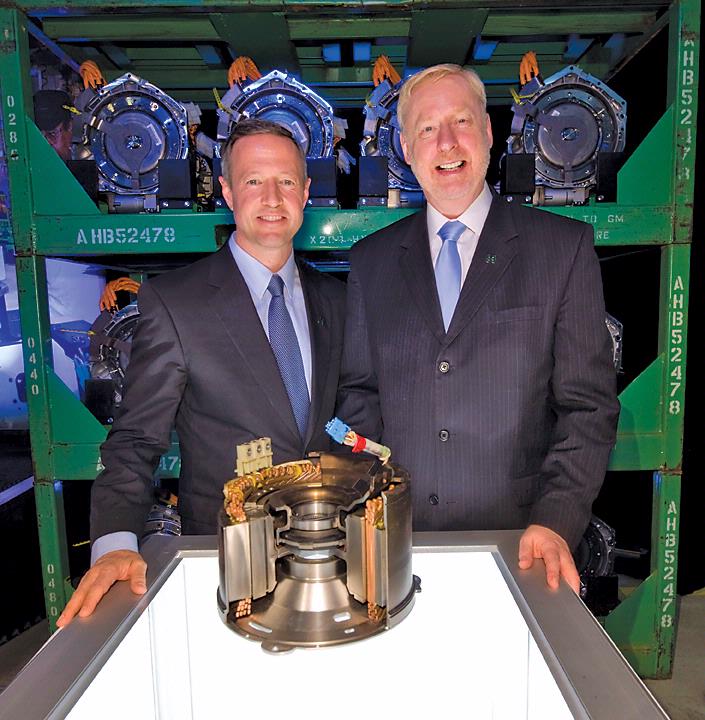 Maryland Governor Martin O’Malley (left) and General Motors Vice Chairman Tom Stephens with a cut-away version of an electric motor, a core technology for hybrids and electric vehicles. The plant’s own green efforts netted it the 2008 Green Manufacturing Award from the Maryland Charter of the U.S. Green Building Council.
Photo by Steve Fecht for General Motors

recent ranking by Good Jobs First of state Web sites tracking how they are disclosing their spending of their portions of the $787-billion federal stimulus bill found Maryland's StateStat site (www.statestat.maryland.gov) to be the best in the United States.

Built on ESRI's ArcGIS platform, the site is modeled after CitiStat, which Gov. Martin O'Malley helped devise when he served as mayor of Baltimore.

our days prior to GM's big announcement in White Marsh, the moved forward too. On January 22, Ports America Chesapeake and the Maryland Port Administration (MPA) finalized a 50-year, $1.3-billion agreement that will allow the MPA to lease its 200-acre (81-hectare) Seagirt Marine Terminal to Ports America. In return, Ports America will construct a 50-foot (15-m.) berth for the of , timed for completion in 2014, just as the next generation of large ships begins to transit the expanded .

Ports is the current operator of the Seagirt Marine Terminal and has operated the facility since Seagirt opened in 1990. Ports has also run operations at the Dundalk Marine Terminal since 1996. An initial payment of $100 million by Ports America will pay for road, tunnel and bridge work. The agreement is expected to generate $15.7 million per year in new taxes for .

The cost to develop the 50-foot berth and four cranes is approximately $105.5 million. The agreement comes at the same time that Ports America is moving forward with another 50-year agreement with the of in , valued at $700 million.