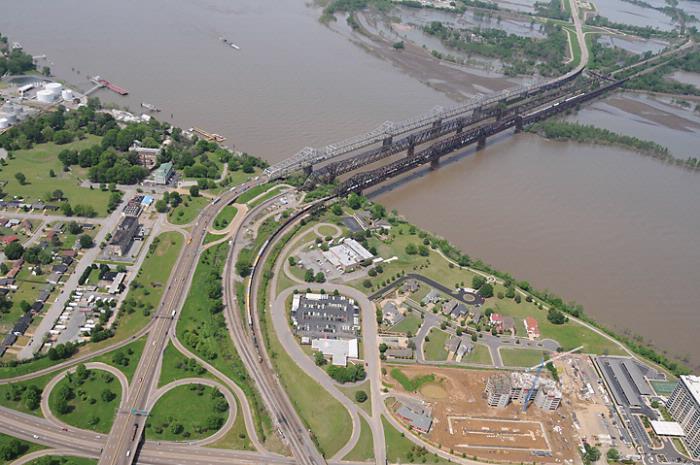 This view from near downtown Memphis shows just a part of the “quadramodal” transport infrastructure that has helped Shelby County, as well as neighboring counties in both Tennessee and Mississippi, lead the way in industrial development along the Mississippi River’s entire nine-state length. Among its attributes are the Port of Memphis, multiple intermodal rail hubs from multiple Class I railroads, an aerotropolis planning concept and improving highway connectivity.
Photo courtesy of Port of Memphis
by ADAM BRUNS
F

Today, at a site near the Mississippi River in Tunica County, Miss., just south of Memphis, Tenn., the company is gaining its first manufacturing perch in North America, as it aims to meet the infrastructure needs of the energy, public works and chemical sectors, among others. After a global search that originally included territories in the Middle East and South America, the company announced in early January 2010 it would invest approximately US$300 million in a pipe manufacturing plant that will create 500 jobs over the next five years.

The company's Mississippi division will be known as Schulz Xtruded Products (SXP). It will be the exclusive producer of a breakthrough product that's already stacking up orders: a seamless extruded metallurgical bonded pipe, or clad pipe, that can serve both upstream and downstream needs in the oil and gas industry, as well as other industries.

Schulz operates three production facilities in Germany totaling 1,076,000 sq. ft. (100,000 sq. m.) and 270 employees. It also operates two plants in Brazil that opened in 2006 and 2008, employing 250 on approximately the same square footage. The company portfolio also includes 14 offices and distribution centers, including a new regional center that just opened at Interwood Business Park in Houston in 2009. Schulz also is looking at the possibility of adding a second distribution center in Brazil, where it opened its first some 15 years ago.

Rainer Floeth, managing director and CFO for Schulz, says in an e-mail interview that the company first looked at opportunities in Brazil, Saudi Arabia, UAE, Qatar and Oman, before choosing to focus on North America. The Houston chapter of the German-American Chamber of Commerce was its introductory portal for a North American site search focused on the southern United States led by him, Assistant Director Daniel Kölling and Don Osborne, backed by the company's entire management team.

"Three hundred counties replied to the request for proposal, and we had about 10 counties presenting to us in Houston in July 2009," he says. "Four locations got short-listed, in Tunica, Georgia, Oklahoma and Arkansas."

Non-union labor, project financing and energy cost were leading criteria, followed by tax and other incentives. "Access to at least a good accessible national airport was an additional but not so important issue," Floeth says. As it turned out, however, Schulz got better than "good," in the form of Memphis International Airport just to the north, where a daily flight operates to and from Schiphol Airport in Amsterdam, just a two-hour drive from Krefeld.

Gray Swoope, executive director of the Mississippi Development Authority, notes that the State of Mississippi has a presence in Dortmund, Germany, and that he has worked directly with Neal Wade, of the Alabama Development Office, making calls in Germany on behalf of the southeastern U.S. At the same time, he gives local credit where it's due.

"Tunica years ago made a conscious decision to diversify from gaming and develop a megasite," he says. The problem was access to the Interstate system. The county used HELP bonds with the state department of transportation, and fronted the costs to have the Interstate brought in, which were paid back by DOT. The site is on I-69. You can connect easily to I-55, and you can go anywhere with your product."

While most of the product will likely move by truck, some may move by air cargo, making the Memphis airport and FedEx doubly important.

"Since we are serving a global market, with a product where transportation costs are not the biggest factor, an inland location was no problem," says Floeth. Utility infrastructure quality and cost was also high on Schulz's list. But financing may have carried the day in the end. Floeth describes the financing environment for projects such as this as "very difficult. Banks are a different animal these days, making such projects almost impossible to finance. Without the unique possibilities of the State of Mississippi, this project would probably have ended up in the Middle East. So, to find the financing was a key issue for the project. Offering a financing solution none of the competitors could offer made it a clear decision."

Asked what types of improvements or "lessons learned" might be incorporated into the new project, Floeth responds, "This would be a very long story based on previous experience in Brazil. I would describe it with 'Don't believe everything you are promised!' "

Skin in the Game

In this case, however, a promise kept swiftly was an object lesson: When the Mississippi legislature convened in early 2010, shortly after the project announcement, consideration of Mississippi's incentives for Schulz topped the agenda.

"On the first day of the session, we introduced a bill about 1:30 in the afternoon," says Swoope. "By five that afternoon, we had a bill out" with House and Senate approval, giving the state the authority to back a loan guarantee. "This was unprecedented," he says. "It wasn't a special session, but the first day of the regular session. Normally they gavel in and go home."

But it was just one aspect of the assistance the state brought to bear.

"As the site search narrowed to a handful of states and then three states, we continued to work with them on two big aspects," says Swoope. "First, figure out how to provide a building we could lease back to them, and second, figure out equipment financing."

Mississippi and Tunica County are contributing $15 million toward construction of the building, and Schulz will lease it back with a purchase option, backed in part by an unnamed private lender in Germany.

The State of Mississippi will back a third of equipment financing by taking a guarantor's position via a $20-million loan guarantee, toward $60 million worth of equipment.

"One thing companies are having trouble with is highly specialized equipment," says Swoope. "Even with the guarantee, it's still very difficult to pull off those kinds of deals today."

"The company has put some equity in the deal," he says. "That gives us the assurance the values are there, so the taxpayer is protected." The state's exposure is $25 million in all in exchange for a $300-million investment, he says, "and we get paid back the $15 million at the end of the day."

Mississippi Gov. Haley Barbour was due to lay the cornerstone for Schulz's plant on March 10. Swoope says the project reflects Gov. Barbour's call for the state to be "forward leaning" even as the recession's effects linger.

"That's a great way to look at it," he says. "We're still protecting the taxpayer in a worst-case scenario. But we're still able to pull off this investment and 500 new jobs." 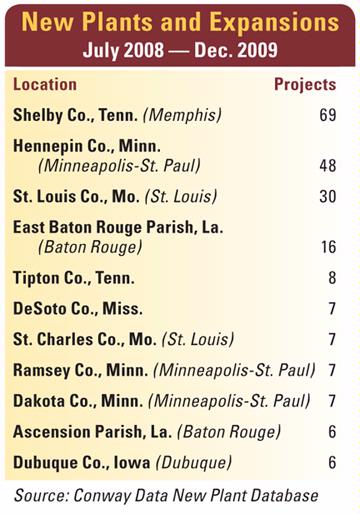 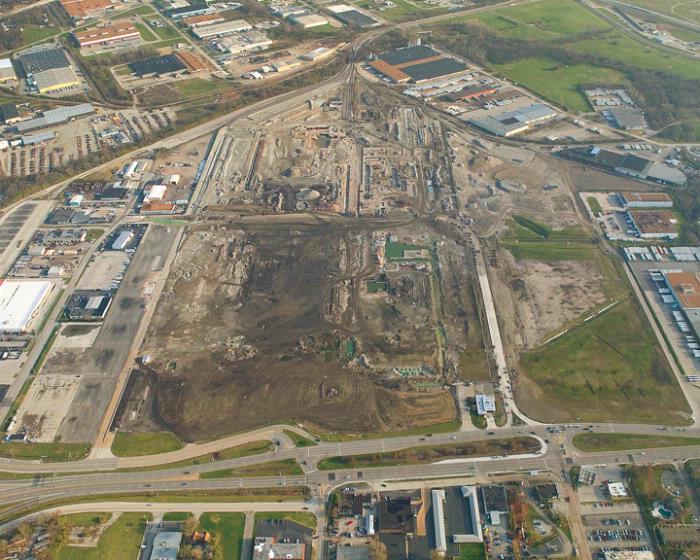 Shelby County Is a Top Mover

ven as Memphis uses its transport advantages to lead all areas in corporate investment along the Mississippi River, its transport infrastructure is only getting better. A forthcoming $112-million intermodal site from Norfolk Southern near Liberty Bowl Memorial Stadium soon will join similar sites in the greater metro area from CN and Union Pacific. The city's aerotropolis concept continues to unfold in multiple directions. And corporate projects continue to arrive: