Ready and Not Waiting:

How ports are preparing to welcome the recovery 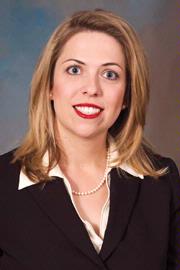 eaports are enormous economic drivers because of the large-scale nature of capital investments and long-term relationships required to maintain a successful operation. Their value as a steady and dependable economic development asset upon which related industries and their communities can rely cannot be underestimated. According to the American Association of Port Authorities, in 2007, U.S. seaports and marine cargo activity generated nearly $3.2 trillion of total economic activity and supported the employment of more than 13.3 million people throughout the U.S. Additionally, the most recent statistics from the U.S. Department of Transportation Maritime Administration show that U.S. ports anticipate spending approximately $9.4 billion on capital improvements through 2011. These investments are laying the groundwork for economic recovery across America.

In Jacksonville, Fla., JAXPORT has recently celebrated two new terminals, which together will nearly triple the port's container throughput capacity to almost 2.5 million TEUs. The first of these expansions, a new 158-acre (64-hectare), $235-million TraPac Container Terminal at Dames Point, serves as the base for Japanese shipper Mitsui O.S.K. Lines' U.S. South Atlantic operations. The second new terminal will be constructed by Korea's Hanjin Lines, one of the world's largest container carriers. Hanjin expects to begin operations in 2013 at the 90-acre (36-hectare), $300-million facility. Together these two developments, which are a direct result of the soon-to-be-completed Panama Canal expansion, are expected to create nearly 12,000 new jobs and $2 billion in economic impact.

JAXPORT spokeswoman Nancy Rubin noted that these impressive shipping lines chose to place their new terminals in Jacksonville because JAXPORT is well-positioned as the "first, best port of call on the East Coast." This is because, as Rubin explained, "JAXPORT is the most westerly port on the East Coast — directly below Cleveland, Ohio, in fact. This strategic position saves shippers time and money and makes JAXPORT extremely attractive."

Numerous other capital improvements and strategic partnerships play a key role in JAXPORT development. Improvements to upgrade the existing rail system at the Blount Island terminal are being funded in part by a $6-million grant from the Economic Development Administration. JAXPORT also partnered with the city of Jacksonville, the Jacksonville Transportation Authority, the regional Transportation Planning Organization and the Florida Department of Transportation to identify critical roadway improvements necessary to prepare for the increased truck traffic to be generated as a result of the new TraPac and Hanjin terminals. This collaborative effort already resulted in the completion of improvements at one critical intersection which vastly increased turning radii for trucks and added new turn lanes.

Perhaps the most impactful port improvement will be the completion of dredging the last five miles of main channel to 40 feet (12.2 meters). The project was recently aided by a $14.8 million grant from the federal stimulus package.

JAXPORT is not stopping its dredging progress there. It is continuing to work with the U.S. Army Core of Engineers on a study which will lay the groundwork to deepen the channel to 50 ft. (15.2 m.).

Throughout the recession, JAXPORT has worked with its existing clients and tenants to market their services, as well as the benefits of shipping through Jacksonville. JAXPORT also assists local companies by administering Jacksonville's Foreign Trade Zone (FTZ). In fact, the Jacksonville FTZ ranked as the seventh-best-performing in the nation in 2008 with more than $1.1 billion in foreign goods admitted — the vast majority of the goods entering the FTZ through JAXPORT.

At the Port of Seattle, which supports nearly 200,000 jobs, capital investment and innovative partnerships are leading to a more diverse and environmentally friendly port. A new $120-million cruise terminal, the only one in the nation with shore power for two ships, plays a large role in diversification of the port's business lines and growth. Last year, the cruise industry was a bright spot for the Port of Seattle, which saw a record-breaking number of passengers. The new terminal has also freed up the old cruise terminal to be used for expanding cargo throughput.

At the Port of Seattle, cargo does not just move efficiently, it moves in a way that is as environmentally friendly as possible. According to Port Spokesman Peter McGraw, "the port has worked together with the Puget Sound Clean Air Agency to develop two very successful programs, a Truck Buy-Back program and an At-Berth Clean Fuel program. As McGraw explained, "the Truck Buy-Back program helped remove high- polluting trucks from the area by providing $5,000 toward a more fuel efficient truck. The At-Berth Clean Fuel program offers a subsidy for container and cruise ships not equipped for shore power to use low-sulfur fuels while docked."

Because of the port's on-dock and very-near-dock rail at all terminals, cargo moves with a very low carbon footprint. A first-of-its kind study by Herbert Engineering determined that the Port of Seattle is the gateway to America's "Low Carbon Corridor," which means because of environmental initiatives at the port and its outstanding rail service, shippers using the Port of Seattle to move goods across America will create the lowest carbon footprint of any shipping gateway to the U.S.

This eco-friendly transit to and from the Heartland of America is also great news for the port's grain exporters. In terms of metric tons of grain, the Port of Seattle realized the third-best year on record and four of the five best years for grain exports in the past five years. While overall cargo volumes may be down, the port's initiatives to grow in an environmentally friendly way and diversify business lines ensure that it will be poised for an economic recovery.

Farther down the West Coast, the Port of Oakland is setting a course for economic growth through a groundbreaking, 50-year public-private partnership with Ports America to operate the Port of Oakland's Outer Harbor berths 20-24. This long-term commitment is valued at approximately $700 million and is expected to result in the investment of $2.5 billion in the Outer Harbor over the term of the agreement.

This isn't the only large-scale public-private partnership on the horizon for the Port of Oakland. The port and the city of Oakland are currently negotiating with a private entity to redevelop the more than 300-acre (28-hectare) former Oakland Army Base to support the Port of Oakland's maritime activities. Specifically, the port hopes the private sector partner will expand cargo operations and extend rail lines to provide on-dock rail service.  Partnership was also employed to complete the $432-million Oakland Harbor Deepening Project, which was funded by the Port of Oakland and the U.S. Army Corps of Engineers. The 10-year project completed last September opens the way for post-Panamax vessels to call on Oakland and expand the port's standing as a global gateway.

It's not just the ships calling on Oakland that are getting larger. Improvements to the rail infrastructure in Northern California over the Donner Summit now allow double-stacked trains as long as 9,000 ft. (2,743 m.) to traverse terrain that previously allowed a maximum train length of 5,000 ft. (1,524 m.). The Port of Oakland worked with many partners throughout California to echo the importance of this infrastructure improvement.

This and many other projects were not planned overnight. According to Port of Oakland spokeswoman Marilyn Sandifur, "because of the port's forward thinking 'Vision 2000' maritime master plan [developed in 2000], the Port of Oakland has numerous capital improvements already in place. We are committed to enhancing our facilities and capacity with available resources and private partners to create a more efficient, economical and environmentally-friendly maritime operation at the Port of Oakland."

Through new capital projects, innovative partnerships and green initiatives, ports are leading their communities out of the recession. Their efficiencies are America's competitive advantage. The planned and completed investments at these ports ensure that they are ready to welcome the economic recovery when it calls on them.