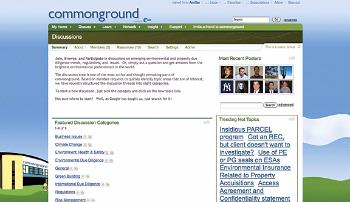 ocial networking is becoming more and more accepted in the corporate real estate realm. Of course, there are the familiar mainstream sites such as LinkedIn and Facebook, but some industry-specific sites are now getting some traction. One such site is www.commonground.com, which specializes in issues important to environmental and property due diligence professionals. Environmental Data Resources (EDR), a leading provider of environmental risk information related to property, created Commonground. The site offers discussion forums in such areas as green buildings, risk management and government regulations.

Commonground has been up and running for nearly two years. One of the early users of the site is consultant Michael Kulka, vice president and principal of PM Environmental in Berkley, Mich.

"Social networking was new and I was kind of interested in it and the different discussions related to issues we face, and to see if others are having similar problems," Kukla recalls. "My initial inclination was I didn't want to share my expertise with competitors. But I did, and it turned out okay and the site grew. They asked me to be on their advisory board to host my own blog. They liked the traffic I was creating, so now I write a blog every two or three weeks on whatever subject might be of interest to me.

Kukla says he enjoys sharing concepts and feedback with his peers. He also says Commonground has definite appeal to corporations looking to locate or expand facilities.

"Companies can go on the Web site and start a discussion if they are looking to expand or locate a facility in, for example, Michigan. People will chime in on the forums. Also, if a corporation is in the middle of a project and runs into permitting issues, they can find answers there too. It's a good shopping ground for services for corporate real estate professionals. It's a place where they can get some other opinions."

EDR went live with Commonground in April 2008. It now has more than 5,500 members from 2,700 companies and offers about 1,000 blogs. Membership is free. Members include lenders, attorneys, health and safety professionals, property appraisers and local and state government officials.

"EDR as a market leader made a decision to make a strategic investment to build some type of better way for the folks they serve to share information and learn from one another," says Mark Wallace, EDR's vice president of social media. "Most of the time, there is a very cordial discussion about various topics. We also have components of the site that deal with things like travel tips and industry events. Most of our members are seasoned professionals. In our industry, a lot are new to social networking. They continuously come back to us and ask, 'How do I go about posting a question?'"

"We are very different than the big [social networking] sites in that we are focused on helping business professionals get the type of knowledge they need," he says. "It's a B2B site, but business doesn't always have to be about business. We do add some things that are a little lighter such as the use of tools in the field. Discussions on the use of hand-held devices seem to be one of the most common topics in commercial real estate. Or, there can be discussions on where is a good place to eat."

Wallace says the fastest growing demographic over the past year in terms of social networking adaptation is the 35 to 70 age range.

"The younger generation has created such a buzz that the older generation says we've got to check this out," Wallace says. "People either embrace technology or they don't. If you embrace it, you see the power of social media. Then, there are folks who are a little afraid of change and they don't want any part of social networking at all. It's an interesting dynamic."

While EDR is exploring some possible monetization of Commonground such as offering environmental due diligence courses online, the company primarily views it as a way to support its customer base and expose its services to prospects, Wallace says.

Send your social networking success story to john.mccurry@conway.com. And be sure to check out Site Selection at twitter.com/SiteSelection.