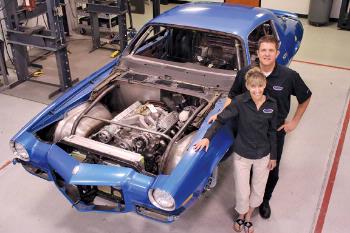 Motorsports companies throttle up expansion pace in Statesville-Mooresville, the Top Micropolitan Area of the Year.

f a driver were as dominant in NASCAR as Statesville-Mooresville is in economic development, the officials who run the sport would likely start building more challenging tracks.

For the North Carolina community about a 40-minute drive north of Charlotte, the test of overcoming a sluggish economy posed a challenge in 2009, but it was hardly enough to slow down the hard-charging area known as .

For the second year in a row, Statesville-Mooresville has been named the No. 1 Micropolitan Area in the by Site Selection for capturing more corporate facility expansion projects than any other small-town area in the country.

How dominant is this community? Consider that it has won the top ranking seven of the last eight years and has finished lower than second place only once since 1999. No other micro area in the nation even comes close.

While most communities experienced declining project numbers last year, Statesville-Mooresville actually went the other way. Its corporate facility total climbed 18 percent from its 17 deals in 2008.

"We were not immune to the economic conditions of 2009," says Russell Rogerson, executive director of the Mooresville South Iredell Economic Development Corp. "The recession hit everyone. Nonetheless, we focused on what we can focus on — new investments and new jobs and assisting companies to help them compete. We have been able to build a diverse economic base in . That has truly paid dividends with new and expanded projects."

During a down year for NASCAR and other racing organizations, Mooresville still landed six motorsports facility deals in 2009. "That says that motorsports is a big part of our economy and identity and will continue to be so," says Rogerson.

The largest of the race shop projects came from Kyle Busch Motorsports, which announced a $10-million investment that adds 85,000 sq. ft. (7,897 sq. m.) of headquarters and R&D space and creates 30 jobs.

"The motorsports community is diversifying into some new markets," Rogerson adds. "At Yates Precision Machining, part of the Roush Yates Engines team, they do very high-end precision machining of parts. That requires a high level of advanced manufacturing skill sets, and it translates well into other industries. That has enabled Yates to expand into military contracts and other markets."

Other events making headlines in included the hiring of IndyCar racing sensation Danica Patrick to join the JR Motorsports team of Dale Earnhardt Jr. in Mooresville.

"That definitely received a great deal of media attention," says Rogerson. "And it ensures that motorsports will continue to be a key factor in our growth moving forward."

But that doesn't mean that Iredell's fortunes are tied solely to race shops, notes Rogerson. "We are a lot more than motorsports and the Lowe's corporate headquarters," he points out. "Those are two very good things to be known for, but we have other interesting companies that are doing some creative things."

Two of them are General Microcircuits and BestSweet Inc. General Microcircuits just completed a $2-million, 18,000-sq.-ft. (1,672-sq.-m.) expansion for circuit-board manufacturing, while BestSweet is a candy company that is branching out into over-the-counter pharmaceuticals. The firm is adding 40,000 sq. ft. (3,716 sq. m.) as part of a $6-million expansion.

Richard Zulman, CEO of BestSweet, tells Site Selection that he will add 35 employees once the new space is completed. "This is a very good location for our company," he says. "There is a good work force in the area, and it is very close to airports and major highways. Interstates 40, 77 and 85 all pass right by the area."

Zulman says BestSweet is expanding to accommodate "growth opportunities for our business. We manufacture confectionery candy, cough drops, lozenges, Rolaids soft-chew antacids and multi-vitamins in a chewy format. This expansion will allow us to make even more products for the health-care market."

The CEO cites other location factors as business advantages. "The economic developers here are very good and do whatever we ask to help," he says. "This area is also good for logistics. It is easy to get materials in and ship out our products. And it is a great area for worker training. We take advantage of offsite training at . We do a lot of training, especially for our management, engineering and maintenance employees."

Zulman also praises the area's quality of life. "This is a very nice place to live," he says. "I moved here from . I have lived here for 20 years, and I plan to stay here."

Dave Dalton, executive vice president of sales and marketing and an owner of General Microcircuits, says that his company's 30 years of success in Mooresville are largely attributable to "the great work force that we have here."

"We are in the high-end electronics business. We assemble circuit boards," he says. "There has been a nice transfer in the area from textile jobs in the 1980s to electronics jobs now. Textiles were the number one industry in Mooresville back in 1980 when we started this business. There is not a single textile job remaining in the city today."

adds, "We have been able to grow our business because our employees know what hard work means. And the logistics for us are incredible. We have three major Interstates close to us, plus the is less than an hour away. For our business, that means that is only a one-stop flight away."

General Microcircuits employs 116 workers and continues to grow, says . "Ten years ago, 90 percent of our customers came from within a four-hour driving distance. Now we have customers from the Northeast to the West Coast and beyond."

Track Record Speaks for Itself

The other half of the No. 1 micro area's moniker — — enjoyed a solid year of growth as well.

"This is a consistently good place to be," says Mike Smith, executive director of the Greater Statesville Development Corp. "When you look at our track record over the last decade, especially when you consider how challenging the times are right now, it puts a premium on businesses finding a place that consistently performs."

Smith says that has succeeded because "we have a diverse base of businesses. Plastics and transportation equipment are strong here, and we are working to enhance this area as a data center market." The community has also tallied projects recently in the automotive and nonwoven materials sectors.

"We feel very good about both of these projects," says Smith. " is creating a 41,000-sq.-ft. (3,809-sq.-m.) tire recycling center that uses clean technology." The company is taking over a former Hanesbrands building on in .

"The Trim Systems project shows our continued strength in the transportation equipment industry," Smith says. "They had several different operations around the country. They determined that was the best site for this plant."

International investors like what they see in the area too. Talon Systems Inc., a furniture manufacturer based in , , announced in December that it would invest $3.5 million to locate its first factory outside in .

Talon sells its products to major retailers such as IKEA, Target, Sears, Lowe's and Home Depot. The plant will enable Talon to satisfy growing customer demand in the , and the .

The company will occupy a 309,000-sq.-ft. (28,706-sq.-m.) facility that was vacated by the Canac Kitchens Division of Kohler. Talon will create 150 jobs over five years, with production starting this spring.

Talon President Derek Okada says the firm considered sites across the Southeast before narrowing the short list to and . He adds that the deal-closer was the assistance that Talon received from the One North Carolina Fund, , and the City of .

"We worked with our partners at the North Carolina Department of Commerce on that project," Smith says. "Talon looked at several different states and multiple locations in . They found a great building that used to house Canac, a firm that made cabinets for starter residential homes. When the housing market collapsed, Canac was forced to shut down and over 500 jobs were lost in the fall of 2008."

The vacant facility became a prime magnet for Talon. "A large building with rail access less than one mile from Interstate 40, the site is only four miles from the intersection of I-77 and I-40," adds Smith. "The property is less than one hour from two international airports — and the , where the new FedEx hub is located. Plus, we are only four hours from the ."

Another international manufacturer, Providencia of , reaffirmed its commitment to in December when it announced that its new plant for making nonwoven materials would be completed in 2010. The project had been delayed last year because of the global recession.

"In the past few quarters, we have noticed an increase in demand," said Herminio Freitas, CEO of Providencia, the largest producer of nonwoven fabrics in . "The resumption of this project will be instrumental in meeting this need, increasing our production capacity to 100,000 tons per year."

Smith says the outlook for in 2010 is even stronger. "We have a major mixed-use development that is going to be at Exit 45 off I-77," he says. "It is a 1,000-acre (405-hectare) development in Troutman that will bring office, retail and residential projects to this area. will have an extension of its downtown there."

The Larkin project by developer GS Carolina of is expected to move forward soon with construction, notes Smith. "It is dramatic in scope, and we feel very fortunate about where that project is right now," he says.

With Larkin and other projects in the works, Smith says that 2010 should be even better for Statesville-Mooresville than 2009. "I still believe that we are just getting started," he says. "There are even better days ahead of us." 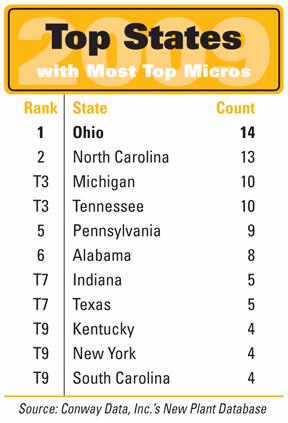 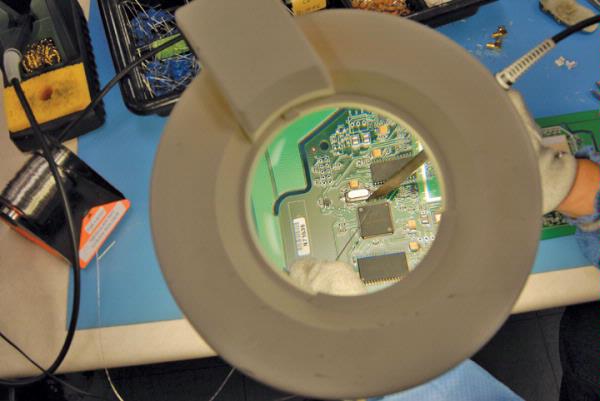 od Crider, president of the Wayne Economic Development Council in , says his community garnered the No. 2 ranking in the Top Micropolitans competition by getting a huge assist from the state.

"The sweeping tax reform passed by the state of several years ago has definitely been a factor in our success," Crider says. "We got to the final phase of that five-year program, which drastically lowers the tax burden on manufacturing companies in . We now have the lowest tax rate in the Midwest, and it has helped to make more competitive. From an overall cost standpoint, companies outside our state now take a closer a look at us."

As the cover story in this issue of Site Selection points out, has now captured the Governor's Cup as the No. 1 state in corporate facility project activity for four years running. Among Top Micros, the towns of and also ranked in the top 10 for 2009.

Crider adds that the program helped land three projects in the alternative energy industry. "We now have a company doing work in the field of bio-mass-based alternative energy, plus a discovery lab in environmental remediation," he notes. "That will probably become a billion-dollar industry."

tied with , for second place in the Top Micros category by securing 13 corporate facility expansion projects in 2009.

has ranked among the top six micros in the country in each of the past four years and has ranked in the top 25 eight out of the last 10 years.