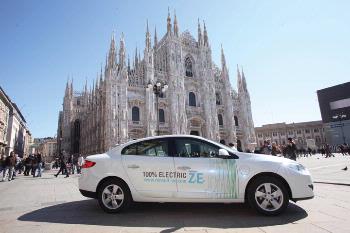 Milan is one of dozens of places where Renault or Renault-Nissan have cemented EV charging infrastructure alliances with cities and regions.
Photo courtesy of Renault

Companies and communities all over the globe strive to create an electric-vehicle ecosystem.

wide ranging strategic partnership announced in April between the Renault-Nissan Alliance and Daimler AG was notable for what it did not include: any mention of electric vehicles (EVs). In other words, let the competition begin.

The news was followed a fortnight later by an announcement from France's Ministry of Ecology, Energy, Sustainable Development and the Ocean that Renault and PSA Peugeot-Citroën (which gets its EVs from Mitsubishi) would be supplying at least 60,000 EVs (and possibly as many as 100,000) by 2012 as part of a wide-ranging government plan that includes designation of 12 cities for charging infrastructure installation, a tender for 50,000 of the vehicles by a coalition of state-controlled and private interests led by the national postal system, and a €5,000 incentive for consumers who purchase vehicles emitting less than 60 grams of CO2 per kilometer.

The plug-in niche is a welcome jolt of hope: Just a year ago, Peugeot-Citroën, Renault and Renault Trucks were the recipients of a €6.5-billion loan from the French government due to paltry demand, in exchange for their promises to keep their French operations open.

Renault, Nissan and the Renault-Nissan Alliance have emerged as early leaders in the multifaceted investments that the introduction of EVs requires: utility and city government partners (agreements have been signed with some 50 communities); vehicle assembly investments; and manufacture of the all-important lithium-ion batteries that will power most EVs. The wave of facility investments by these three entities alone encompasses sites in Flins and Maubeuge, France; Valladolid, Spain; Aveiro, Portugal; Bursa, Turkey; Sunderland, U.K. and Smyrna, Tenn. in the U.S. The new GM is investing in Baltimore. Korea's CT&T will assemble EVs in Pittsburgh. Daimler is investing in Berlin and in China, the latter via a partnership with Chinese firm BYD, which is 10-percent owned by Berkshire Hathaway. McKinsey predicts there will be 100,000 EVs in Shanghai by 2020. Meanwhile, Chinese/Hong Kong firms and investors are embarking on EV production in the U.S. and in South America. The circle keeps right on turning.

The maps depict EV, advanced battery and other EV-supply-chain-related facility investments tracked by Site Selection since January 2008. The maps also highlight where in the world lithium resources reside, whether commercially exploited ("reserves," led by Chile and China) or not quite there yet (Bolivia). As documented by the U.S. Geological Survey's annual report on lithium, approximately $940 million of the $2.4 billion in U.S. Dept. of Energy grants allocated in 2009 toward manufacturing capacity for batteries and electric-drive components and for the deployment of electric-drive vehicles was received by lithium battery materials suppliers, lithium battery manufacturers and a lithium battery recycler. A joint venture from Dow, Kokam and other entities will be investing in a major project in Midland, Mich., for instance, in a state that appears to present the ultimate re-purposing opportunity.

The maps depict information available as of mid-April. At press time news was circulating of Ford Motor Co.'s talks about EV charging networks with utilities across the nation; GM was investing even more in battery development in Warren, Mich.; and the huge Hybrid Kinetic Motors plant in Alabama was becoming more real by the moment.

Who Will Thrive First?

More difficult to track is the ranking order of nations, regions and communities when it comes to installation of EV charging infrastructure. The EV revolution certainly is alive in France on a national scale. It's also taking hold across the entire state of Hawaii, on the French island of Réunion in the Indian Ocean, and in such expected and unexpected communities as Vancouver, B.C.; Nashville, Tenn.; Madrid, Spain; Boulder, Colo.; Hartford, Conn.; Hong Kong; Ireland; North Rhine-Westphalia, Germany; and Indianapolis and Elkhart, Ind. Most efforts, of course, feature utilities in a starring role. Thus are their economic development roles coming full circle: from serving the high-load needs of automotive OEMs to serving the distributed-load and road needs of those OEMs' coveted EV products.

As Charlie Allcock, director of economic development for Portland General Electric in Portland, Ore. (yet another hot spot), told the Site Selection Energy Report in March, "Every day, there are a couple of new announcements. It is a field changing by the hour."

Portland is one of five cities in the Pacific Northwest that are among the 11 cities receiving charging infrastructure installation from ECOtality, a Phoenix-based firm working with Nissan that received one of those DOE grants (nearly $100 million) to carry out a three-year pilot project that will involve 4,700 Nissan LEAF cars and 11,210 charging stations at residential, commercial and public locations. The other cities are Salem, Eugene and Corvallis, Ore.; Seattle, Wash.; San Diego, Calif.; Phoenix and Tucson, Ariz.; and Nashville, Chattanooga and Knoxville, Tenn.

"We are the largest single deployment of electric vehicle infrastructure in the U.S.," says ECOtality spokesperson Jeanine L'Ecuyer, former spokesperson for former Arizona Gov. and current Secretary of Homeland Security Janet Napolitano. "One thing the grant is clear about is that there is no way that U.S. governments will be able to afford to support robust infrastructure. So they asked us to develop a sustainable business model that will allow this infrastructure to thrive." 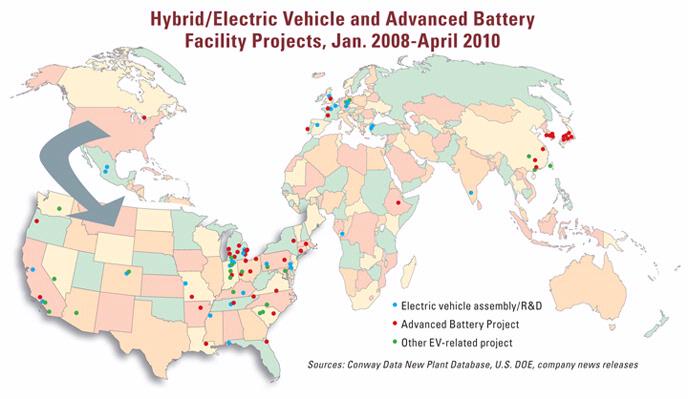