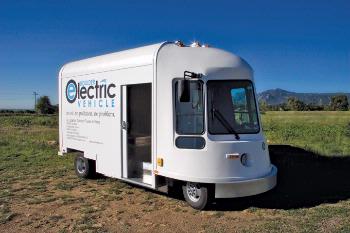 olorado continues to embrace a leadership role in renewable energy. Gov. Bill Ritter signed a law in March requiring the state to derive 30 percent of its energy needs from renewable sources by 2020. That is the second highest percentage among states behind California, which has a goal of 33 percent. Ritter's administration says the goal will lead to 100,000 solar rooftops in the state over the next decade.

Boulder Electric Vehicle is developing a factory in Boulder to produce a zero-emission delivery vehicle. The vehicles have a range of about 120 miles (193 km.) and the company says electricity costs are three to eight cents per mile. The company is headed by CEO Carter Brown, who is described on its Web site as a "serial entrepreneur."

Brown's background includes development of composite-based kayaks. In 2006 Brown built what he refers to as the heaviest electric passenger car in the world by converting a 1963 Mercury Monterrey with 1,800 pounds of AGM batteries. This project started his longtime association with Bill Dube, an engineer who has built electric motorcycles. Dube serves as the company's chief technology officer. Brown has assembled a management staff that has built more than 50 electric vehicles over the past 15 years.

Brown says BEV is currently tooling up its 60,000-sq.-ft. (5,574-sq.-m.) production facility with the goal of reaching full production this summer. The company has been testing its first truck for about a year.

"We started up in Boulder because there is a lot of electric vehicle expertise in this area," Brown says. "One of the things we looked for is keeping the manufacturing facility close to home. Boulder will probably remain world headquarters. It's a small shop, but it gives us the ability to put additional facilities on both coasts and the Midwest. As we do these large-format vehicles — trucks, buses, vans — the carbon footprint and cost of delivery is reduced and the economic benefits will go to several states, not just Colorado. We want to keep our first plant in Colorado so we have great quality control before we expand."

Brown says he expects to produce between 5,000 and 10,000 vehicles out of the company's first facility. When it is fully ramped up, he says the facility will employ 700.

"The time has come for this technology," Brown says. "There are a lot of interesting things we did to make the truck weigh half the weight of a normal truck. Batteries are expensive, and if you can make the vehicle more aerodynamic and weigh less, and be more efficient, it will cost less for a customer."

Brown says early adopters are among the first customers lined up for the new truck. These include city and state governments and private delivery companies.

The company acquired a 129,304-sq.-ft. (12,000-sq.-m.) building to support its expected growth in manufacturing operations. The facility, which includes approximately 30,000 sq. ft. (2,787 sq. m.) of office space, will house the company's engineering, vehicle integration and headquarters staff in addition to the company's high-volume motor and electronic manufacturing operations. Approximately half the site is available for future facility expansion.

Bach is manufacturing in the former Colorado Railcar Manufacturing building, which had been vacant since 2008. Bach plans to employ 100 to 150 as it ramps up during 2010. Bach CEO Geert Skovsgaard touted Colorado's business-friendly environment, skilled work force and dedication to economic development and business assistance as key factors in his decision.

"While its reputation as a leading state for renewable energy and the presence of such an important customer made Colorado an obvious choice, it was not our only option," Skovsgaard said. "Our decision to locate in Fort Lupton is a direct result of the extraordinary attention and assistance we received from the governor's economic development team, which made it possible to acquire, entitle, renovate and occupy a vacant industrial building more quickly than I ever could have hoped."

SGB USA, a division of German transformer manufacturer Starkstrom-Geratebau, is establishing its first U.S. plant in the Denver suburb of Wheat Ridge. The company produces transformers that convert electricity generated by wind turbines into a form that can be delivered on the power grid. The company is also a Vestas supplier. 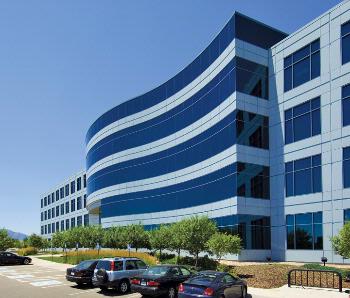 Scottrade has opened a business operations center in the Denver suburb of Westminster.
Photo courtesy of Scottrade
O

nline investing firm Scottrade is in rapid growth mode. The St. Louis-based company opened its 458th branch in Florence, Ky., on April 5, and is on schedule to reach the 500 mark by year's end. That growth generates growth in the company's back office function and has led the company to open a new business operations center in the Denver suburb of Westminster.

Scottrade moved into the 204,000-sq.-ft. (18,950-sq.-m.) building in mid-April and will initially occupy 40,000 sq. ft. (3,716 sq. m.) with the remainder designated for expansion. The building will serve as a secondary business operations center housing additional operations, information technology and national service center employees.

"We were looking for a second site for redundancy for our service center and operations and also IT," says Kathy Simino, director of branch development for the online investing firm. "We wanted it in a different time zone [from St. Louis] so that we could service customers on the West Coast later in the day. We also liked the Denver area because there is a strong financial services and IT presence."

Simino says 87 employees moved into the building in April and the company plans to gradually add 285 more over the next five years. The facility is in the Westmoor Technology Park on Denver's west side. It is near other technology companies, making it an attractive location, she says.

"We had a team that looked at sites in different states and what made sense in terms of disaster recovery," Simino says. "We looked more at the western side of the U.S. With all those factors in play, Denver made sense."