State of Sonora: An Interesting
Approach to Mexico’s Auto Industry

onora is a State that integrates its world class manufacturing as no other state in Mexico. It is able to serve diverse industries with different necessities with the highest standards of quality. This is where the State bases their Automotive, Electronics, Aerospace, Metal Mechanic and Medical Industries.

The logistic offer that presents Sonora, as an integral multi-modal region that also covers maritime service, is an important aspect for consideration. Sonora has the largest border with access to North America and to the Asia Pacific Region. This State, located in northwestern Mexico, has the infrastructure necessary to offer excellent service to the Automotive Industry. The best proof for this is the testimony of the industry players who manifest the manufacturing experience without any logistical barrier.

The main industry in Sonora is in fact the Automotive Industry, which includes a Ford Stamping and Assembly Plant in Hermosillo (Ford's Best Plant in terms of quality and productivity) and over 44 suppliers. This Industry has been distinguished of generating high quality products that are recognized all around the World as the best in their class. 2010 has not been the exception as the Ford Fusion received the 2010 North American Car of the Year. With the constants demand changes that the automotive industry had all over world, the Sonoran companies began the grounding for more difficult times to come, investing more in human capital and facilitating the scenario to accomplish more competitiveness in the years to come.

At this time, Sonora is the only world-class automotive zone in the Asia-Pacific. This implies a great potential for industry in the region, which is well prepared with the best elements to face the high market demand. The new global trends for the Asian car manufacturers are looking to enter the U.S. market through Mexico; Sonora is considered the perfect platform of Asia automakers for North America.

Sonora is developing the same infrastructure as many of the other Mexican Border States, but the big difference is having the Port of Guaymas on the Pacific coast in addition to an industrial infrastructure that is divided among 17 different municipalities all featuring the latest in industrial parks. Another advantage is that Sonora has a Strategic Free Trade Zone that offers a real competitive advantage in terms of infrastructure.

In addition to Sonora being home to the best Ford Plant in the World, other industries such as aerospace are taking advantage of the manufacturing capabilities, becoming the number one turbine components manufacturing center in the World.

For this 2010, Sonora continues its partnership with automotive companies established in the region, some of those companies diversifying to other sectors such as energy generation and aerospace. Ford announced the launch of the new Hybrid Lincoln MKZ for 2011, which represents more solidity for the rest of the suppliers that are looking into Hermosillo to supply the plant.

Regarding the labor environment, 2010 is an iteration being a year without complications, with sensible agreements that allow working in a harmonious way to the companies, without forgetting their main objective: To maintain quality and productivity.

As the Automotive Industry in Sonora has been preparing for the economical defies coming, the State itself has been grounding the terrain to make Sonora an adequate place for those already installed companies to remain doing business in a profitable way and with a sustainable growth, besides the Sonoran region keep being an attractive place for the arrival of new assembly plants. It is forecasted a great future for this State in the Northwest of the country that is under scrutiny of important transnational companies that analyze to establish operations in Sonora.

Sonora is also pushing hard for industrialization, inclusive in the traditional sectors by adding value and state-of-the-art technology. This well-developed State aspires to grow in quality, not just in employment statistics. It is important to say that the State authorities have been actively integrating local manufacturers into the productivity chains to make them even more profitable. 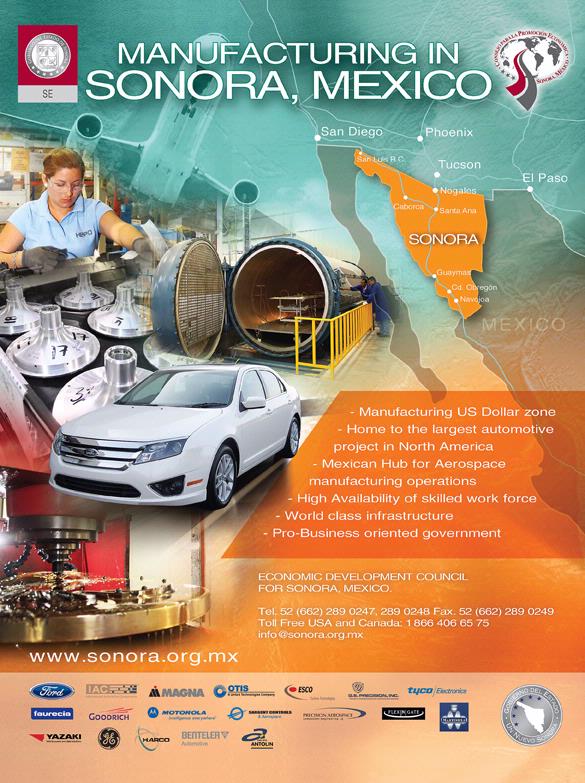