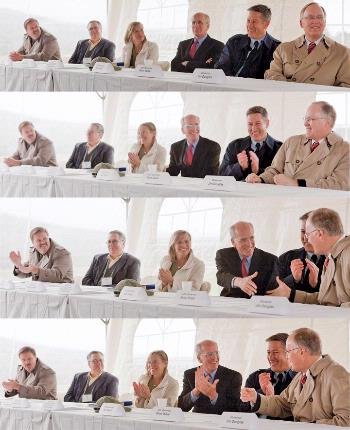 As new energy projects seek the right-of-way to fruition, one company finds Vermont a powerful choice over China.

ydro-Québec's clean hydropower and plans to grow its influence on both sides of the border hold vast potential for economic development in all of Atlantica, and New England in particular.

For 2009, Hydro-Québec recorded income from continuing operations of just over $3 billion, the highest in its history. Though its purchase of New Brunswick Power was cancelled this spring, the Canadian utility plans to pipe 1,200 new megawatts (MW) into southern New Hampshire by 2015. Might new, clean, and more affordable power sway companies heretofore turned off by the region's high energy costs to instead locate and grow there?

According to regional transmission organization ISO-New England, the bulk power system in New England consists of more than 350 generators interconnected by over 8,000 miles (12,800 km.) of high-voltage transmission lines. Within the six-state region, there are more than 31,000 MW of power supply with an additional 2,300 MW of demand-response resources. Thirteen interconnections allow import and export of electricity with neighboring grids in New York and Canada. Since 2002, the region has invested more than $4 billion in its transmission system, and there is another $5 billion worth of investment on the horizon.

One of the policy goals of the Canadian Electricity Association (CEA), expressed in an April 2010 report called "The Integrated Electricity System: Sustainable Electricity as the Foundation for Economic Recovery in North America," is to ensure that state and national renewable energy standards are "inclusive of all North American renewable electricity sources." To many, that careful language could be translated as "it's time the U.S. recognized hydroelectric power as renewable." It's especially relevant in New England, where each state has its own renewable portfolio standard goals.

In the 1,428-page Waxman-Markey legislation currently under scrutiny in the nation's capital, while cap-and-trade provisions dominate the headlines, other significant measures also are present, and in some cases rankle. One is that new hydroelectric capacity in the U.S. will count as renewable, but new Canadian hydro may not. As the Institute for Energy Research in D.C. puts it, " 'Qualified hydropower' under the standard must be from a facility approved by FERC, which eliminates relatively plentiful Canadian imports from qualifying."

In an interview, CEA President and CEO Pierre Guimond says, "We all know hydroelectricity is renewable. What we're talking about is rain and gravity. For us, it's self-evident that hydroelectricity at the right price will help out any marketplace because of its inherent qualities. New Englanders will buy the electricity if the price is right — that's a universal rule all over the world. We will do the same thing. If you guys produce electricity that is what we need, we will buy it from you. Electrons flow across the border with considerable freedom."

But electrons are not elected to office. And Waxman-Markey remains murky on the issue.

"The Waxman-Markey bill doesn't give any specific guidance as to whether Canadian-produced hydropower qualifies," says Meera Fickling, research analyst Peterson Institute for International Economics in Washington, D.C. "However, it does set a number of conditions on hydropower in terms of the production being incremental, and in terms of environmental quality. It says that FERC, in some cases, needs to certify that these conditions are being met. So in sum, it's unclear to us whether Canadian hydropower qualifies or how Canadian hydropower would be certified if it did."

Or as Gordon van Welie, president and CEO of ISO-New England expressed it in a recent presentation, "The single greatest issue facing the operation, expansion, and regulation of the power system is the uncertainty about national energy policy … As the industry awaits federal policy direction, it is likely that a lot of investment could be on hold."

Among various power projects across New England and nearby Canada:

In March, Maine legislators began to mull over a measure officially designating statutory corridors for energy transmission designation, in order to keep the state competitive as a provider in the face of more Canada-produced power.

Guimond knows what new interconnection projects can mean to an area, based on a project now ready to go within Canada.

"Hydro-Québec has built an interconnection of 1,250 megawatts between Québec and Ontario, and we're all waiting with baited breath for some of that electricity to flow," he says. "If we have another hot, humid summer, that line will be used. Interconnections are a good thing. By definition they help reduce prices and increase the availability of supply."

The EV Revolution Comes to Barre

In the world of power management, batteries store it long-term, and capacitors turn it around as fast as possible. Such dispatch has been the hallmark of a new project from capacitor maker SBE Inc. in Barre, Vt., just north of the state capital of Montpelier.

The $18-million manufacturing project, which broke ground April 17, will create 130 jobs, which is pretty big news for a town of just 10,000 people, known as the Granite Center of the World. It's also big news in a community that only saw a total of 18.5 acres (7.5 hectares) of land converted from undeveloped and non-forested or forested land to developed land between 1970 and 1990.

SBE was on the verge of sending the manufacturing work to China (it maintains an office in Xiamen).

"We wouldn't have been able to afford the cost of labor to produce this for a competitive price here in the States," says Brad Gordon, project staff and government liaison for SBE. Then company officials became aware of the U.S. Dept. of Energy's Electrical Drive Vehicle Battery and Component Manufacturing Initiative grant program, funded by the Recovery Act. The company put together a proposal, and received word in August 2009 that it was moving on to the next round. "Any later and it would have been too late, and we would have been too far along on the path to China," says Gordon. Eventually SBE won a matching grant of $9.1 million for its project.

"This grant, along with matching funds from a variety of agencies and organizations in the State of Vermont, and SBE shareholders and management, will enable SBE to continue the growth of our Power Ring Film CapacitorTM technology utilized in current and future designs of hybrid, plug-in hybrid and pure electric vehicles — here in Vermont," said Ed Sawyer, president and CEO of SBE.

The plant capacity on a new site in Wilson Industrial Park will provide supply for over 100,000 electric drive vehicles within three years.

Gordon says the strict state permitting process for a VT Act 250 Land Use permit often can take six months or more. But he credits a public-private team effort for getting it done in 38 days for this project — "fairly unheard of here." Among the parties providing support were the Barre Area Development Corp. and Central Vermont Economic Development Corp. "The complete permitting process including a number of other state and local permits took approximately 2-3 months from the time we started drafting site plans to when we were completely construction ready in the state's eyes," Gordon adds.

In addition to tax breaks and a loan derived from a $1-million Community Development Block Grant, the Town of Barre is committing some $380,000 toward road and utility extensions to the site, which is located just a couple miles from the company's main facility, which has been part of the City of Barre's industrial landscape since 1946.

Gordon credits the state's intimate atmosphere for making the project work, citing an "incredible amount of access to state and local decision-makers."

An electronic and capacitor manufacturer uses a heavy energy load, and because of its testing requirements really doesn't have much wiggle room. "With a growth project like ours, power usage is going to be much higher for this new facility," says Gordon.

Helping the economics work for the new project is a special "Jobs Incentive Rate" from Green Mountain Power that will start at a time of SBE's choosing within six months of the building's completion. The rate will enable the company to receive approximately $125,000 in rebate on energy usage through a declining-rate discount scheduled over the rate offer's three-year term.

The state is making sure its power supply situation is staying affordable and reliable too: Green Mountain Power and Central Vermont Public Service in March announced a new MOU with Hydro-Québec that sets the stage for a new power supply contract. The current one, signed in 1987, expires in 2016.

"Reaching a new long-term agreement with Hydro-Québec is a good deal for ratepayers and strengthens the state's economic future," said Vermont Gov. Jim Douglas. "This new contract will provide stable, clean, renewable power at a competitive price through 2038. Energy trade is the centerpiece of our longstanding and valued trading relationship with the Province of Québec."

The companies anticipate purchases totaling up to about 225 MW starting in November 2012 and ending in 2038. The term sheet includes a price-smoothing mechanism that will shield customers from volatile market spikes over this period. CVPS, GMP and Hydro-Québec will negotiate final terms of the agreement over the next few months.

One provision of the agreement is for the Vermont General Assembly to enact legislation to designate large hydroelectric power, including Hydro-Québec power, as renewable. Any renewable energy credit revenues for Hydro-Québec power delivered over the Highgate Interconnection would be shared between the Vermont companies, benefiting their customers and Hydro-Québec. 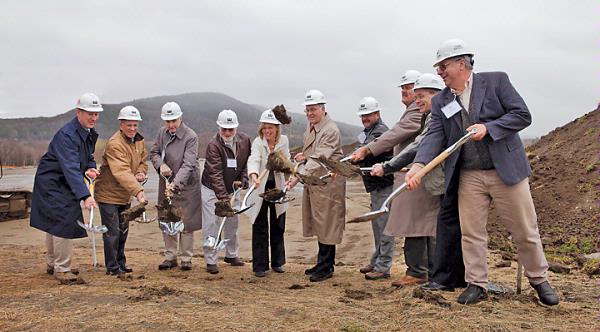 Against the backdrop of the Green Mountains, company and government leaders get in on the celebration at SBE’s groundbreaking for a new $18-million high-volume capacitor manufacturing plant in Barre, Vt., in April.
Photo courtesy of SBE