Diagnosing and treating illnesses of the brain propel an emerging
cluster of medical technology companies in Saxony-Anhalt. 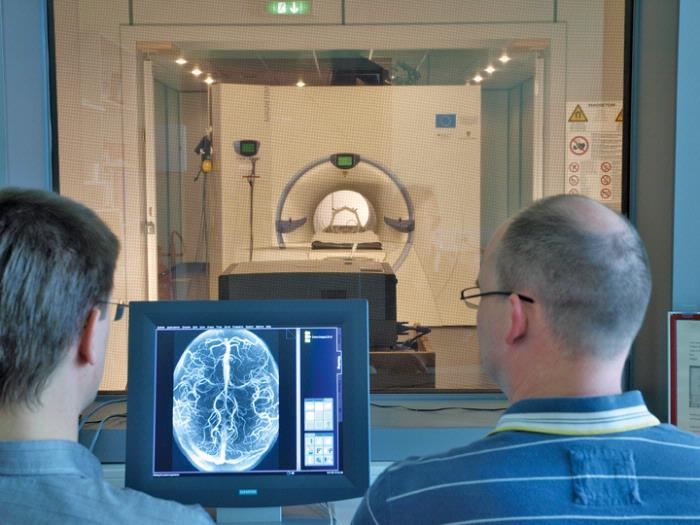 Researchers at the Leibniz Institute for Neurobiology in Magdeburg are developing new ways of looking inside the human brain to diagnose and treat neurological diseases and disorders. At the Leibniz Institute, the Tesla-Gerat MRI scanner is used to provide clearer pictures of the brain and brain activity.
by RON STARNER
P 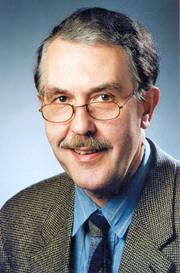 “There is a large biomedical complex here and it attracts some of the top researchers in brain science.”
— Dr. Henning Scheich, scientific director for the Leibniz Institute for Neurobiology in Magdeburg

eering inside the human brain is not an easy task. But in Saxony-Anhalt, Germany, scientists are developing breakthrough technologies that are revolutionizing the treatment of neurological disorders.

The cutting-edge research coming out of Magdeburg is doing more than improving health care; it is turning the region into a destination of choice for companies operating in the neuro-medical sector and other fields of biotechnology.

At the center of this surge is Dr. Henning Scheich, scientific director for the Leibniz Institute for Neurobiology in Magdeburg. The professor moved from western Germany to found the institute in 1992, and the progress has been steady since.

"We have a very large sector in brain research right here in Magdeburg and it is very well known internationally," Scheich tells Site Selection. "There is a large biomedical complex here and it attracts some of the top researchers in brain science."

That research is producing new methods for diagnosing and treating brain disorders, and that in turn is prompting the development of new life-science companies in the region.

"We work in the realm of neuro-plasticity and related research," says Scheich. "We mainly analyze neuro-plasticity and some diseases with new imaging techniques. We have developed new techniques for MRI scanning. For example, we have developed an acoustic intercom system that works inside these scanners, and that helps with brain research. Inside an MRI scanner, no electronic equipment works because of the high magnetic fields. With the acoustic intercom system, we can communicate with the patient while he or she is being scanned. We have founded a company that distributes these devices internationally."

The institute also develops brain tracers that can be used in scanners. "There is a problem of channeling tracers from the bloodstream to the brain," says Scheich. "There is a blood-brain barrier that excludes certain substances from the brain. But we have developed the ability to sneak certain tracers into the brain. We have developed new radioactive substances that do not harm the brain but give us valuable feedback."

Breakthrough research is taking place with Parkinson's patients in Magdeburg due to the work coming out of Leibniz. "The problem with pharmacological treatments of Parkinson's disease is that they eventually become ineffective," the professor explains. "In some cases, that happens very early on and the patients become intractable. But we have developed a new treatment method. We can implant a pacemaker in the brain that interferes with the pathological activity, and we have found that it helps the patient very well. We are also working on interfaces that target brain stimulation for treatment of depression, anxiety and certain compulsive disorders."

Altogether in Saxony-Anhalt, some 60 companies operate in the medical technology field, a sector that employs about 2,200 people in the former East Germany state. These firms are engaged in R&D and production of innovative prostheses, surgical robots, telemedicine, and other aspects of medical device manufacturing and internal medicine treatments.

Saxony-Anhalt not only welcomes large companies, but also young start-ups and medium-sized enterprises with innovative products and process ideas. The IBG (Innovation and Associaton Bank), a bank specializing in venture capital in the field of high technology, offers financial contribution, especially for those start-ups and SMEs. For a certain amount of time, the IBG Bank participates in high-tech oriented, innovative projects and companies in the areas of life science, nanotechnology, microsensors and new materials to support them to start their business.

EKF is celebrating its 20th anniversary in Barleben/Magdeburg as a market leader in making devices for the analysis of glucose, lactate and hemoglobin.

Today, the company employs 120 workers and is embarking on a series of facility expansion projects designed to increase the flow of technology, innovation, production and logistics at the firm's headquarters. The expansions will facilitate the launch of two new product lines this summer — one for diabetes care centers and a second for clinical analysis and data management.

"We do not compare ourselves with the big brands," says Christian Weyer, marketing director for EKF. "Our strategy is to be strong in profitable niches and to focus on selected product features for special target groups where other manufacturers are failing or are simply missing. Ergonomic use, modern design, information technology connectivity and local distribution service will also enhance our customers' experience and ensure our long-term business success."

Hasomed was founded in Magdeburg in 1997 and works on therapies for cognitive disturbances. The company's researchers have developed a therapeutic system that can train attentiveness, memory and perception in stroke patients. The firm also developed an appliance that enables paraplegics to move their legs with their own muscles.

Many of these firms owe their origins to breakthrough research that first materialized in the region a quarter century ago. Even before German Reunification, Magdeburg was widely known as the center of brain research. Computer-assisted systems for diagnosing and treating brain disorders were first developed by the medical faculty of the University of Magdeburg in 1985.

Today, about 40 companies and research institutions in the region belong to InnoMed E.V., an association for the Network for Neuromedical Engineering. "Most companies in Saxony-Anhalt boast long-standing traditions," says Heike Worel, director of the association. "The location has cluster potential."

Prof. Scheich agrees. "Most large medical companies have branches here," he says. "They produce a number of products here. Plus, the graduates coming out of our institute and the universities in Magdeburg and Halle are starting to create their own companies here too. At our biomedical complex, we have a large facility where quite a few medically oriented companies are engaged in R&D. As we continue to train more and more people in this field, these small companies will grow and we will attract new ones."

Companies that establish operations in Saxony-Anhalt frequently cite the state's flexibility, competent work force, secure investment environment and dynamic economy as positive location factors. They also like the state's modern transportation and logistic infrastructure, generous investment incentives (up to 50 percent of the investment), low wage rates and easy market access. The Central European location gives companies the ability to reach virtually all markets in Europe within a day's travel or less.

Saxony-Anhalt is also known for its high-quality workmanship and highly technical work force, often well trained at leading universities and institutions. Even though the workers' skills are advanced, labor costs in Saxony-Anhalt are 30 percent below the German average.

The Investment and Marketing Corporation (IMG) is the economic development agency of the German Federal state of Saxony-Anhalt and is responsible for promoting the state nationally and internationally as a place to do business. IMG staff provides confidential and cost-free market-entry assistance through every step of an investment project including planning, site selection, financing consultancy and authority management.