by John Troughton
B

usiness parks are comprised of improved, ready-to-go lots upon which developers and owner-users can build distribution, manufacturing, research and development, and office facilities. Business parks are often located near major highways and airports to facilitate the value-added processes and movement of people, goods and services.

Most major urban areas are already "built out," making the development of new business parks of relevant size economically impractical because they would have to demolish existing buildings to create ready-to-go land. The development of a business park just outside a city, however, provides added economic stimulus for developers to create retail and housing near the business park for the benefit of current and future workers in the park, adding more value to the enterprise.

Corporations and their site selectors understand that the primary criterion for investing into a community is whether or not there is a business park with ready-to-go land nearby with lot sizes and other attributes that fit their needs. Area amenities, a good work force, and even attractive government incentives are often not enough to bring businesses to an area without shovel-ready land. The time cost and risk of obtaining necessary entitlements will often cause even a "good" un-entitled site to be less preferred than an "average" ready-to-go site in an existing business park. The best way for a community to signal the corporate world that they are ready and willing to participate more in the global marketplace for manufacturing, R&D, and distribution work is to facilitate the construction of a business park.

Redding, California — located in Shasta County mid-way between Seattle and Los Angeles — has worked with local partners since 2000 to create an approximately 700-acre business park called Stillwater Business Park. The first phase of the park has the capacity to provide approximately 100 acres of ready-to-go land for a single user. The City of Redding is the lead developer for the project and plans to benefit over time from the approximately 700-acre business park by attracting businesses and significantly expanding the local employment base with ready-to-go land in one of Northern California's largest cities surrounded by world-class recreational, cultural and sporting opportunities. Redding has made the initial investment to create this business park. By doing so, the community can look forward to enhanced employment opportunities and corporate investment near their homes.

In the current economic slowdown, the temptation for many private developers has been to shelve or postpone business park projects. Stillwater Business Park has continued forward and has recently received funding that will help create the second phase of the park. As the economy turns around and corporations and their site selectors expand their operations and seek more location alternatives, projects such as Stillwater Business Park will benefit from its forward planning and community commitment, which will ensure more economic growth for the area.

John Troughton is a Senior Director operating out of the Oakland, Calif., office of Cushman & Wakefield, Inc., a global real estate services company. His email is john.troughton@cushwake.com. 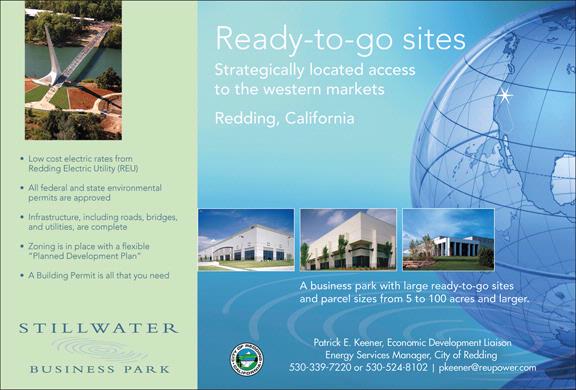 CERTIFIED SITES: Not All Checklists Are Created Equal (Apr 21, 2016)