South Carolina is landing more jobs and more credibility as a transportation
industry cluster, thanks in part to an Upstate automotive research center. 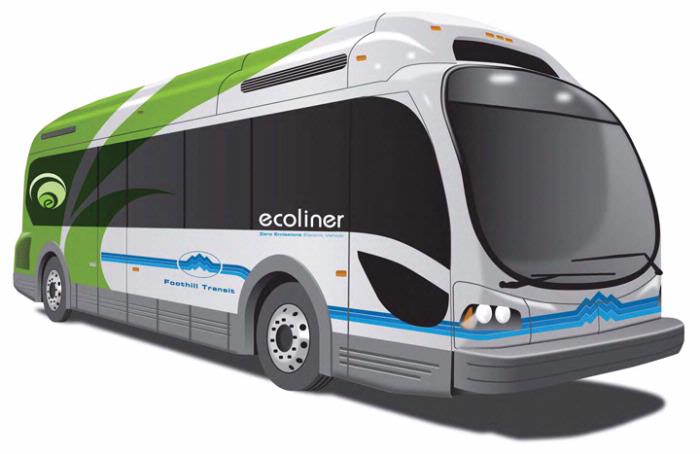 The Ecoliner city bus is a zero-emissions vehicle under development by Proterra, Inc., and under consideration for use by dozens of U.S. cities. The company is establishing an R&D and manufacturing center at Clemson University International Center for Automotive Research, near Greenville.
Photo courtesy of Proterra
by MARK AREND
N 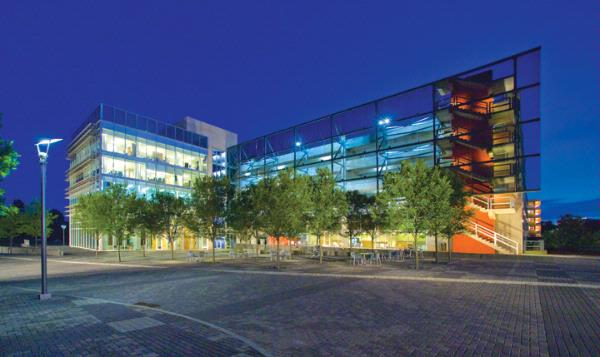 o pun intended, but for Automotive Research (CU-ICAR) on I-85 near is on a roll — just do the math. In recent months, the center won two research-park accolades and two key transportation-sector investments. One of these, from Colorado-based Proterra Inc., will generate more than 1,300 new jobs. The company announced plans in February to build a state-of-the-art research and development and manufacturing facility where it will develop and assemble "cleantech" drive and energy storage systems for heavy-duty vehicles.

Among other products, Proterra makes the BE-35 fast-charge battery-electric transit bus, which has been tested at the Federal Transit Administration's Altoona Center as achieving between 17 and 21 miles per gallon (diesel equivalent), a roughly 500-percent improvement over conventional diesel buses. Proterra's first vehicle, a battery-dominant fuel cell hybrid transit bus funded by the FTA, is in service in , S. C.

"After a nationwide search involving some 30 states, we selected , as a result of the state's numerous benefits in terms of work force capabilities and research and development support," said Jeff Granato, Proterra's CEO, at the February 4 announcement. The company plans to invest US$68 million and create more than 1,300 new jobs over the next seven years in . The company will hire a variety of skilled workers to support functions including mechanical assembly, warehouse, logistics, managerial, engineering and quality assurance.

Also in February, Sage Automotive Interiors, which makes automotive bodycloth for OEMs, announced it would locate its headquarters at CU-ICAR in one of the center's several new buildings under development. A $3-million U.S. Dept. of Commerce grant is helping to finance a new, 60,000-sq.-ft. (5,600-sq.-m.) multi-tenant building with office and lab space, 60 percent of which is already spoken for by Sage Automotive, which will occupy one floor, and others.

Sage, a portfolio company of based investment firm Azalea Capital, followed up that news with an April 13 announcement that it would invest $10 million and create 80 new jobs over the next five years at its manufacturing facility in the nearby community of Gayley. Four hundred of the company's 1,000 worldwide associates are employed in .

In noting the Upstate's strong technology and innovation resources as contributing factors in the company's investment decision in Gayley, Sage Ceo Dirk Pieper cited the support and assistance of the Greenville Area Development Corp., Clemson University and CU-ICAR, where, in addition to Proterra's new facility, American Titanium also will begin construction on its R&D center (see the South Carolina Spotlight in the May 2009 issue) on site this year.

"We are way ahead of where I thought we might be at this time," says Robert Geolas, CU-ICAR's executive director. Recognition from science park authorities in 2009 didn't hurt. The Association of University Research Parks named CU-ICAR its 2009 Emerging Research/Science Park. And the National Academy of Sciences, in a statement to the U.S. Senate Committee on Commerce, Science and Transportation in December 2009, cited CU-ICAR as an example of best practices in the area of public-private partnerships that support technologically advanced manufacturing in the U.S. "We are focusing on a niche area, on automotive transportation and energy, whereas a lot of parks today either follow a mixed engineering and science model or they're bioscience and biotech," says Geolas. What matters most, of course, is landing tenants, especially of Proterra's caliber.

"Other parks are seeing work in the area of batteries and electric vehicles, but we've set up a culture here that's far more flexible," says Geolas, "and I think Proterra saw a chance to come in and be engaged and help shape the program for them — they liked the environment." Besides which, Upstate economic developers worked hard to land Proterra's commitment.

made the short list of three finalist states, says Joshua Goldman, Proterra's director of business development. But it was the state's public-private partnership approach that won the day, he says. "It was being able to work not only with the City of and State of in terms of the legislature, chamber of commerce and resources and planning, but also with CU-ICAR."He says financial incentives from the combination of parties made the location particularly attractive.

"The partnership with CU-ICAR needs to be played up as an advantage the Upstate of South Carolina has," adds Westy Bowen, Proterra's vice president, integrated supply chain, and project manager for the new facility. "It's the only university campus that's dedicated to automotive research, which was a strong enticement." Automotive research centers operate in several locations, including and , but "ICAR has a particular focus on hybrid and electric vehicle research, with a movement now, with our product, toward heavy duty," says Goldman.

Proterra's initial product is a heavy-duty city transit bus powered by a battery that can be fully recharged in just 10 minutes. The company is also developing a line of other large vehicles based on its ProDrive all-electric and hybrid drive systems, among other initiatives. Proterra will lease 25 acres (10 hectares) in Technology Neighborhood Three on the CU-ICAR campus to construct a 240,000-sq.-ft. (22,296-sq.-m.) building, with the potential to expand into the entire 50-acre (20-hectare) site. Construction was to begin in mid-2010.

The facilities from Proterra and Sage Automotive are not the only transportation projects coming to the . Several others have been announced in recent weeks, including these: