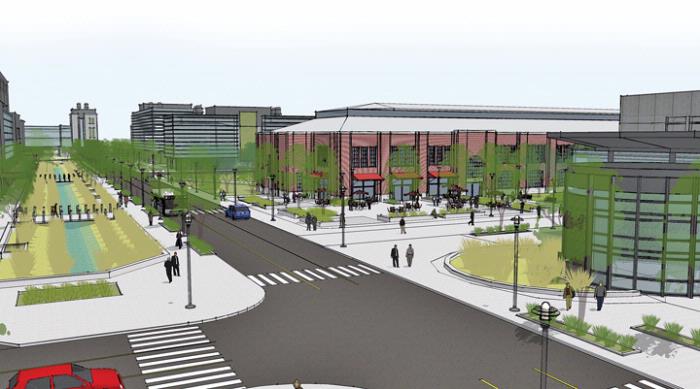 Learning and discovery are Nebraska’s ultimate competitive advantage, once the talent, companies and places find each other.

ast year at this time, the State of Nebraska's Department of Economic Development (DED) and Department of Labor were advertising for an outside contractor to conduct a competitive advantage assessment. At a cost of US$220,000, Battelle has since carried out that assessment, and issued its report in September.

Mitch Horowitz, vice president and managing director of the Battelle Technology Partnership Practice and primary author of the report, says Nebraska has a "very robust" industry base and fared well during the last business cycle. It also has a solid pipeline of R&D activity, whether it be on corporate or academic campuses. The challenge lies in bridging those two strong fundamentals.

"Here's an economy that's really performing well, and obviously getting graduates from the University of Nebraska, Creighton, the community colleges and other schools," he says. "But the really deep connections you see in more well developed tech economies aren't as apparent. I think there are some great opportunities as they move forward to embrace that, but with the strong foundation of an industry base in place."

Helping that base get even stronger in recent months were a new ethanol dry mill from ADM in Columbus (150 jobs); a $1.7-million manufacturing plant (its first in the U.S.) from German sheet metal component maker Graepel in La Vista (14 jobs); and an investment of more than $19 million in two sites to be operated by start-up Laurel BioComposite in Laurel (20 jobs). The new company will employ 20 initially in the manufacture of bioplastic enhancer. A combination of CDBG funds awarded by the state and city funds will assist the project, which includes a $14-million facility used to turn distillers' grain into plastic.

Horowitz found in his team's research a strong commitment by the state to improving its educational system in order to move into higher-value areas. "If you don't, you're just educating for the rest of the country," he says, citing the state's strengths in biofuels, biomass and biosciences in general. But the first sector to focus on, he says, is all those Nebraskans who reside elsewhere.

"What people want to know is that the jobs are there," he says. He cites a Gallup poll of some 2,500 former Nebraskans that found high interest in returning to the state among those with certain high skills, and a nearly 80-percent interest in coming back from those under 30. (Gallup itself is based in Omaha.)

"Creating more connections between the student base and the employer base is the way to go," he says. "I have a feeling if you went onto campuses and asked, 'Where are you going to go work?' they're thinking Chicago and Denver. So I think the first thing is to bring back the talent Nebraska has lent to the rest of the country."

One such "ready site" can be found in Lincoln, a city that was one of the dramatic upward movers in the 2010 Milken Top Performing Cities Index, released in October. The Lincoln Business Center is a new 165-acre (67-hectare), shovel-ready industrial development site owned by Lincoln, Neb.-based Concorde Real Estate and being marketed by Jones Lang LaSalle. The center recently ranked first in a comprehensive site-selection study of competitive 100-plus-acre sites in Nebraska, Iowa and Kansas and, says Jones Lang LaSalle, "is well-situated for regional users and for any national distribution network with five or more DCs."

"We're now in the process of trying to develop some shovel-ready rail-served sites around our state," says Richard Baier, director of the Nebraska Department of Economic Development, "because we think long term, based on our history with the railroad industry and reputation as a logistics hub, there is an opportunity to do projects that are rail dependent. We also have the luxury of connecting to both power grids, east and west."

Baier says both rural and urban business community support for Battelle's recommendations has been strong.

"I just came from a meeting in Lincoln," he says, "and there was a lot of interest in doing a better job of capturing and keeping our talent. Rural areas of America for a long time have been exporting talent. This is a chance for us to turn that tide and head it back in the other direction."

Baier says DED has been active over the past four years in recruiting former residents and alumni, especially in places such as Denver. He agrees with Battelle that the state needs to do a better job of connecting young people to industry. But the action will come from local leaders.

"I just challenged the Lincoln Chamber to stand up and identify where they could accommodate more interns," says Baier. "I think there's a lot of work for all of us to do." The Battelle report will serve as a catalyst for that work.

"One of my frustrations with the economic development profession as a whole is we are more focused on activity than outcome," says Baier. "This study and all the things we are doing are really about successful outcomes."

Baier says there has been pronounced economic development momentum on the campus of the University of Nebraska since James B. Milliken arrived as president a couple years ago, including the appointment of a system-wide vice president for economic development serving the school's four campuses in Lincoln, Omaha, Kearney and at the medical center in Lincoln. New relationships between DED personnel and university technology transfer personnel are blooming where little existed before, helping to accomplish such tasks as an inventory of existing intellectual property, for example.

Each campus is also being asked to develop its own innovation campus, he says. The medical center already has opened two new research centers in the past two years. In Omaha, a new institute will break out of the gate on property formerly occupied by the AkSarBen horse racing track. And on the flagship campus in Lincoln (UNL), an elaborate plan is well under way to build the Nebraska Innovation Campus on a 250-acre (101-hectare) site adjacent to the main campus that formerly was home to the state fairgrounds.

In addition to research areas such as computer sciences and nanotechnology, among others, Baier says the site will be focused on industries and research related to food, fuel and water, aided by a $50-million gift in spring 2010 from the founder of Valmont Industries to fund a new Global Water for Food Institute and a $20-million gift to fund an agricultural entrepreneurship program.

Many sports fans were stunned this past summer as the University of Nebraska-Lincoln announced its move from the Big 12 conference to the Big Ten. Among the lesser-known aspects of the move is that UNL would be considered for membership in the prestigious Committee on Institutional Cooperation, a consortium of the Big Ten universities plus the University of Chicago. The CIC leverages faculty, funding, facilities, investments and ideas to help the collective whole compete and succeed. Among its core projects are technology collaborations to build capacity at reduced costs and leveraging purchasing and licensing through economies of scale. 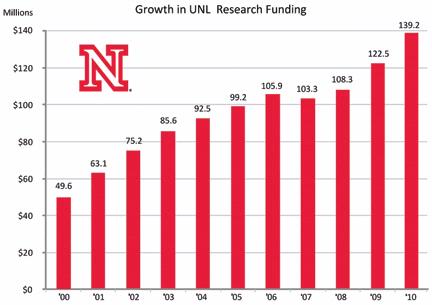 The University of Nebraska-Lincoln announced in August that research funding increased nearly 14 percent to a record high of more than $139 million.