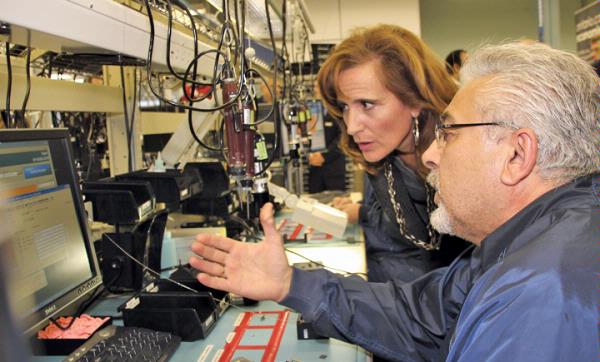 Ontario Minister of Economic Development and Trade Sandra Pupatello gets a lesson in digital imaging technology from a professional at Waterloo firm DALSA Corp., which in October received a $24.3-million provincial grant to support its investment of $160 million, which will add 114 jobs to a payroll of 232. The company’s cameras are used by manufacturers, medical offices and parcel shippers worldwide.
Photo courtesy of Ontario Ministry of Economic Development and Trade
by ADAM BRUNS
F 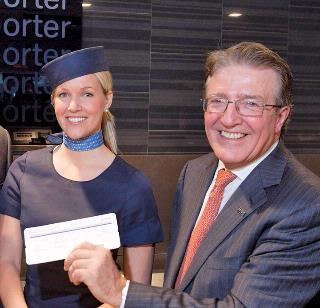 resh from a trade mission to Germany, Sandra Pupatello, Ontario’s minister of trade and economic development, says she fielded lots of questions from business people about the economic state of things in North America.

"They see the American consumer being still a bit skittish," she says. "We really could give them a sense that Ontario is differentiating itself a bit."

That’s because Ontario, and Canada as a whole, have fared a bit better than their North American cousins as the Great Recession has worn on.

"The financial services industry actually grew over the last year and a half," she says. "It put Canada on the map, if you will. All of a sudden, Canada is on the top of the list in terms of a structure for financial services."

A growing Toronto business has itself lent a helping hand to the province’s trade missions on behalf of that sector. Upstart Porter Airlines in February opened a new C$50-million* terminal at Billy Bishop Toronto City Airport, adjacent to the city center. Asked if she’s flown Porter, Pupatello says, "I love Porter. Are you kidding? They use the Bombardier jet made in Ontario. And Bombardier is expanding."

From two planes and one destination in 2006 the premium-service airline has grown to 20 planes, nine Canadian destinations and three U.S. destinations (New York, Boston and Chicago), as well as seasonal flights to Mt. Tremblant, Que., and Myrtle Beach, S.C. Soon it may be 30 aircraft, as Porter in August placed an order with Bombardier for four aircraft, plus six options.

"When we do financial services missions to New York or Chicago, Porter is a sponsor," says Pupatello. "The benefit is you can fly from any of those financial centers and be right there in the heart of Toronto."

Just as resurgent as financial services has been the advanced manufacturing sector, especially the automotive industry, which has seen increased support from the province over the past five years. Pupatello’s list of recent projects includes Ford’s $750-million investment at its Essex engine plant; a third shift at GM’s plant in Oshawa; a second shift at Toyota’s plant in Woodstock; Chrysler’s investment in Etobicoke; and Honda’s second shift in Allison, where it just doubled in size last year.

Solar and wind technologies could also be understood as a branch of advanced manufacturing. Pupatello says Ontario’s 2009 Green Energy Act lays the foundation for renewable energy companies to envision Ontario as a North American base. Progress continues as a result of the decision by a consortium led by Samsung C&T Corp. and the Korea Electric Power Corp. (KEPCO) to invest $7 billion to generate 2,500 megawatts of wind and solar power in the province. The consortium is also working to attract four manufacturing plants that would create 1,440 manufacturing and related jobs building wind and solar technology. Siemens has already committed to build the turbine plant, though a final location has yet to be chosen. An electronics division of Siemens just expanded in Peterborough, and Pupatello says she talked with Siemens officials in Germany about possible opportunities for their medical device and water technologies divisions, the latter in connection to the province’s Water Opportunities Act, and what she calls "an enormous market for water products."

Part of Ontario’s standard offer is its openness to immigrants. Asked about how the province links its immigration policy to the welcoming policies of the Canadian government, Pupatello says, "Labor mobility is an issue. Our population growth is largely linked to immigration. We put a lot of time and effort into integration into our systems. Investors from abroad want their key leaders to come along with that investment. They want access to work visas. We now have a division within our ministry that helps them walk through that process."

Processes are also the focus of Ontario’s Open for Business Act, which Pupatello introduced in May 2010 and which is currently under review by committee at the Ontario legislature.

"We’re about to go into third reading," she says. "The lion’s share of the work has nothing to do with regulation, but with the business practices of the government. As we work with business, there is a change of attitude and culture, a shift inside the government, to make it easier to comply with rules we give them." She cites a certificate of approval process for changes within work sites, which used to require the same certificate whether a company was changing a fan or building a steel plant.

Meanwhile, a more wholesale review of timely service standards has been under way, across 17 ministries, beginning with Pupatello’s own ministry.

"We brought the key sectors in, then the deputies for every ministry they interact with," she explains. "They sat down in the same room at the same time. The premier attended too. We had asked the business groups to identify the top five priorities, and they then presented them to everybody. We said, ‘In two months we’re coming back and we will have resolved those top five areas you’ve identified.’ And we did. The template worked, and we now have five sectors on the go. It does require a lot of work on the part of the industry, because they really have to focus. But we’re having really good success at getting at the issues that have been a burr in their side for many years."

One burr growing less bothersome is the corporate tax system, which is moving toward a combined federal and provincial rate of 25 percent, vs. an average rate in U.S. states of approximately 39 percent.