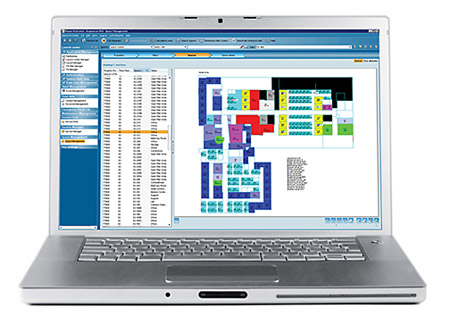 Biotech firm Regeneron found that Planon Software’s solution met its space and asset management requirements right out of the box, and required less manpower to manage.
by JOHN W. McCURRY
B

"As we planned for moving into our new buildings, we started to look for a new system for our large-scale growth and to help with our move," says Jessica Terranova, a senior facilities coordinator at Regeneron. "It had to be Mac and PC operable and it had to merge with Oracle."

After getting the advice of an architectural consultant, Regeneron decided to go with Planon Software to handle its space and asset management and maintenance tasks. The company deployed the system as it moved into its 390,000-sq.-ft. (36,231 sq. m.) campus at the Landmark at Eastview Campus in

"We worked with an architectural consulting firm to help us pick a solution," says Michael Cassidy, project manager with Regeneron's IT department. "Planon wasn't even on our radar at that time. We discovered that Planon excelled in what we needed and was able to meet our requirements right out of the box."

Cassidy says a big consideration was costs. One of the other vendors the company considered said their system would require six people for a company of Regeneron's size. Planon's system requires just a part-time job, he says.

"We had a very tight timeline and had to split it into two phases," Terranova says. "We wanted to go live with the system at the same time as the move. We met our deadlines and we had a consistent team as well. Planon was very accommodating in working with our schedule. We built three new buildings on our site adjacent to our existing facility while growing by 500 or so people."

Another desire was to configure a system that a non-technical person could manage and change. Terranova describes the system as user-friendly.

"We use it daily for work orders, space management and preventive maintenance," Terranova says. "It's working very well, and we've had a large success with our end users. They enjoy using it."

Regeneron is so pleased with the system that it is already having internal discussions about expanding its use.

"We see greater value by expanding," Cassidy says. "We will be looking at additional modules they have to offer."

Marco Nijenhuis, Planon's manager for professional service, says the system Regeneron uses keeps track of the four buildings, each floor on those buildings and the space on those floors.

"It captures how the space is used, and the square footage gets assigned to the department that is using it. In asset management, it keeps track of all the lab equipment and all the equipment in the research center."

"If something happens such as a leakage or a malfunction in an asset, they have an online portal which we built for them, which is accessible to the whole organization. The responsible persons will then take action to fix it."

Nijenhuis says Planon has at least one major upgrade per year to the software. Clients pay a license fee and for an annual maintenance contract.