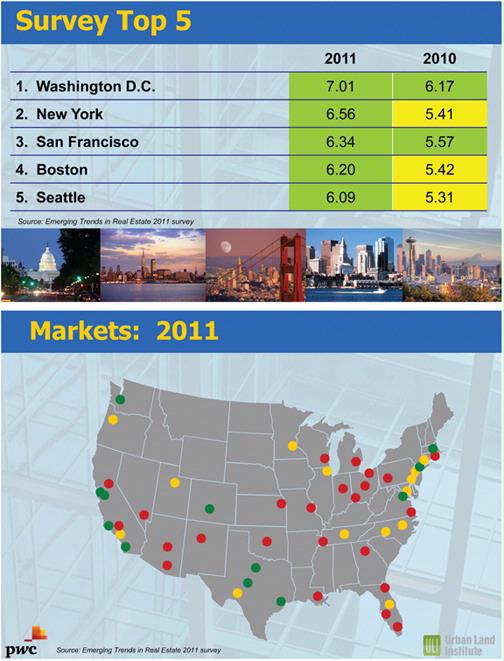 The Emerging Trends in Real Estate 2011 report, released in October by the Urban Land Institute and PriceWaterhouseCoopers LLC, refers to the cities indicated in green as “markets to watch,” meaning their prospects for recovery and growth in 2011 are quite favorable. Seattle, at number five, and several other coastal cities make the cut.
S

eattle fared well as a "market to watch" in the recently issued Emerging Trends in Real Estate 2011 report from the Urban Land Institute and PriceWaterhouseCoopers LLC. The report, published in October, is based on the views of more than 875 people familiar with the real estate finance and service provider arenas.

The number one market in the U.S. is Washington, D.C., which comes as no surprise to report co-author Jonathan D. Miller, a partner at Miller Ryan LLC, who says the market "continues to hold on to the top spot whenever our economy is in the tank, in recession, and it’s no different this year. It doesn’t do layoffs, thanks to the federal government, and that has been true no matter who has been in power. It’s a core investment market, and institutional investors love it." New York is second and is the most important "global gateway" market in the U.S., which is a key driver of economic growth. San Francisco, Boston and Seattle round out the top five — all of which are coastal cities, which generally scored better in the 2011 forecast than interior markets (see map).

"The global gateway markets are the ones doing the best," says Miller. "They [typically] are on the coasts, they are the familiar ports and international airport destinations, and they are the foremost, vibrant 24-hour cities." To what extent does Seattle — Washington’s largest metro — fit this bill? Few would call it "vibrant" from a real estate market perspective, but it does have the gravitational pull of its peers in the report’s top tier of cities.

"These places are concentrating brainpower and jobs, they are attracting our best and brightest, the echo boomers, the vibrancy of a lot of young people starting their careers. These places are also luring back empty-nesters who have raised their families and want greater convenience of mass transit and the excitement of 24-hour cities. And they continue to be the investor magnets as investors search for the flight to quality they find in these markets.

"Seattle," says Miller, "is retaining its position as an up-and-coming global gateway." But all of the markets in the green category on the map — which he says are best described as "not so bad" — have a long way to go in the current economic environment.

Seattle’s specific challenges, according to survey respondent comments cited in the report, include "perimeter areas left off the job growth path" due to large companies moving from suburban campuses to infill locations, housing prices down 30 percent from record highs and a shaky state fiscal picture with tax increases and service cuts likely.

On the bright side, notes the commentary, Seattle "gets a boost from immigration to the area, gaining 160,000 residents since the recession. Young workers attracted to tech firms want 24-hour lifestyles near where they work." And there’s this: "Industrial markets firm up at the bottom. The Puget Sound will continue to solidify its position as one of the nation’s most important shipping hubs."

That’s largely a function of the Seattle/Tacoma ports’ role as West Coast logistics hubs relative to those of Los Angeles/Long Beach, which handle the bulk of the inbound shipping from Asia. Seattle/Tacoma scores an 82.0 on Jones Lang LaSalle’s new Port Index, which was introduced in JLL’s Port, Airport and Global Infrastructure Outlook report, released in summer 2010. The index is intended to be an indicator of overall desirability to industrial developers and investors.

"An 82 is better than Oakland’s 78," says John Carver, executive vice president and head of the Port, Airport and Global Infrastructure practice at JLL, but not as high as L.A./Long Beach’s 91.4. "Our clients both on the development and investment side and the occupier side have to look at the ports and understand what it means to them from a real estate standpoint. This index brings those worlds together. [The report defines the index components in more detail.] The scores tended to swing based on the amount of infrastructure that was going to be invested into the market. If you look at the ports gearing up for the Panama Canal expansion [on the East Coast], you see $200 million and $300 million, and $1 billion in the case of Savannah, Ga." The Port of Seattle has a $70-million capital budget over the next five years for infrastructure improvements.

"A lot of the West Coast markets are very tight in terms of real estate markets," says Aaron L. Ahlburn, JLL’s Americas director of research, industrial. "Seattle and Tacoma are right in the mix there, but they’re not quite as tight as L.A./Long Beach, so there is definitely a little more vacancy in the markets.

Since the report was released," he continues, "we have not seen a lot of net growth in demand for real estate — there is a lot of trading space going on right now. There is not a lot of gain, and we’re seeing rents continue to decline. People are testing the waters and are unsure about how the environment will be long-term." 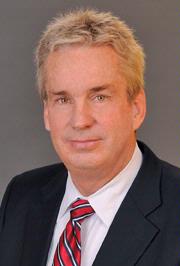